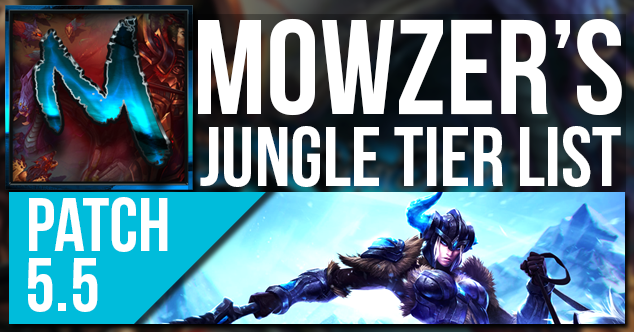 Hey everyone. Mowzer here. Things change and junglers rise and fall and that is what keeps this game fresh and fun. Every player has a different viewpoint on the game. This is where the diversity of picks, builds, and play styles comes from. Theory crafting keeps the game fresh and new. Below is my tier list for patch 5.5. Yes, I know not everyone will agree with me and I am fine with that. I really enjoy doing these lists and I hope I can help some of you out.

The list below has the champions listed from 1st to 10th. I feel that 1st is the strongest and 10th is the weakest, of those listed. This does not mean that any of these champions are weak or not viable. I would like to point out that there are far more than 10 viable/good champions. There are, in fact, over 20 junglers I feel are good. Attention! This is a top ten tier list, not a complete tier list. I will say that again, this is NOT a complete tier list of every champion that can jungle.

The big 10: note (5th to 1st) means that I ranked the champion on my list at 5th last time and now is placed 1st. Unlisted means they were not on the previous list.

Post any comments below or let me know what you think. Check out my champion cards and comic series. I hope everyone is enjoying these tier lists. Thank you for all the support, feedback, and criticism. I greatly appreciate it! My social sites are Facebook, Twitch, Youtube, and Twitter. Special thanks goes to my girlfriend and Nunire for checking my work, input, and helping me with various design projects. You guys are amazing. Have a wonderful day and best of luck you in your games.

TL;DR – The age of the hulk is here. Tank junglers are back and the jungl is easier to manage. Sejuani is the reigning queen. Remember, things change and junglers rise and fall. That is what keeps the game fresh.