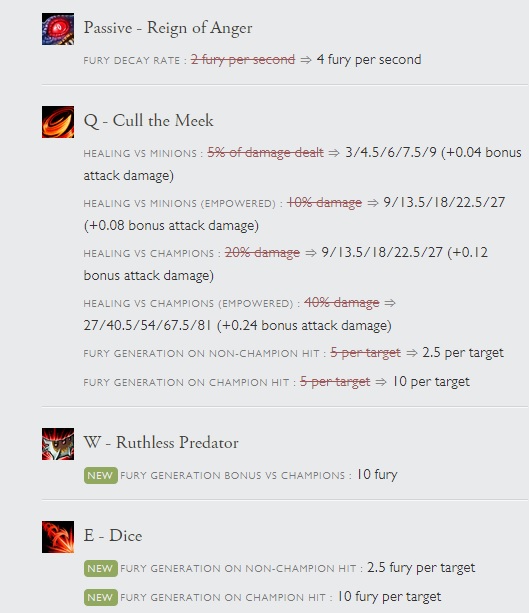 With a new season rapidly approaching, Riot has release patch 5.1 to start off the new year. As we all know, new season patches commonly shake up the scene, not only in solo queue, but in the professional scene as well. This latest patch is no different, bringing sweeping changes to champions and items alike. All these changes means there is a lot to talk about, so for the time being, I’ll be covering the champion changes and the impact they will have on the professional scene. Part 2 will follow shortly to discuss the item and gameplay changes.

Azir– The only change to Azir this patch is a bug fix. Prior to the patch, when casting sand soldiers and attempting to auto attack, if the player attempted to orb walk just on the edge of the soldier’s usable range, the attack animation would trigger but do no damage.

Elise– Elise is finally getting some love. Elise’s Q in both forms is receiving a buff. With the damage of Q being increased by +25 against monsters at all ranks, Elise should have a bit of a better time with the jungle. When the jungle was updated, Elise fell a bit by the wayside as her clear wasn’t particularly fast and her spiderlings could no long efficiently tank dragon. The buff in this patch will hopefully help her clear times, as well as helping her sustain the jungle because of the clear speed.

Evelyn- Evelyn is getting some rather major buffs. Prior to the patch, when stealthed, Eve would regenerate 1% of her missing mana per second. This mana regeneration rate has been increased to 2%, when stealthed, in the latest patch, giving her a more consistent mana pool to draw from when ganking. Her E (Ravage) is also gaining the ability to proc on hit effects such as: Blade of the Ruined King’s % hp damage or sheen procs from any of the sheen items (i.e. Trinity Force, Lich Bane or Iceborn Gauntlets)

Fizz– There really isn’t much happening with Fizz. Patch 5.1 fixed a bug on Fizz that caused Urchin Strike (Q) not to apply sheen procs if the enemy was too close to him.

Gnar– Now this is actually an interesting change. Gnar has had his lane bullying potential nerfed. Pre level 6, Gnar’s Boomerang Throw (Q) has had its cool down refund on catch reduced from 60% cdr to 45% cdr. Along with this nerf comes a buff on his ultimate, “GNAR!” This buff creates tiers of cooldown refunds for his Q. The refund increases to 50%, 55% and ultimately ending at his original 60% at levels 6, 11, and 16 respectively.

Hecarim– Hecarim has had a couple changes designed to help his jungle clear. The mana cost on Rampage (Q) has been lowered in the early game and his Spirit of the Dead (W) has had its healing cap increased by 30 at all levels.

Janna– Howling Gale’s (Q) width decrease by 30, moving from 150 units to 120 units. The intention is to somewhat mellow out Janna’s lane dominance.

Jayce– Jayce is getting his Hyper Charge (W) toned down a bit. At max rank, doing 130% of base damage with increased attack speed is bit over the top. Because of this, the damage at max rank has been reduced to 110% in an attempt to keep him from blowing enemies up without even swapping forms. At rank 1, the damage is the same 70% still, allowing him to still lane with relative ease.

Kalista– Kalista is in an awkward stage as a champion. The changes to the champion are fairly miniscule, and probably won’t have much impact. There is a small change to the way her passive functions, allowing her to select a different target as the attack animation winds up. Her W (Sentinel) has had its passive changed slightly to increase the benefit of coordinating with her soulbound partner.

Nautilus- Nautilus got a buff to his Titan’s Wrath (W)… kind of. Ultimately the changes to his W will make him stronger as the game continues. However, the changes seem to have weakened his already poor early game.

Rek’Sai– With this patch comes what is sure to be the first of many nerfs to Rek’Sai. These nerfs will likely effect solo queue, but I doubt they’ll have much effect on the pros. Q in both forms (Queen’s Wrath and Prey Seeker) and Unburrow (W) have both had their damage reduced.

Renekton– This is probably the biggest champion change in this patch. The only ability untouched was his ultimate. For these changes, it’s probably best to just show the notes themselves.

Rumble– Just a bug fix on his Super Galaxy skin. There was an issue with the cooldown between harpoon casts being shorter on that skin than others.

Sion– Minor bug fix. Prior to the patch, when Sion would revive in his passive form, if he was affected by Grievous Wounds at the time of his death, he would revive in zombie form with less health than intended.

Skarner– Skarner got a few buffs. Crystal Slash (Q) had its mana cost cut down ranks 2-5, and Fracture (E) had its cooldown reduced at ranks 2-5. The idea behind the changes is, like the other junglers mentioned above, to bring him to a more viable standing. The changes will inevitably make jungling easier, but he still suffers from the same issues as before the patch.

Sona– Sona got nerfed. No nice way to put it. Her base movement speed went down by five points, and the damage amplification on Hymn of Valor (Q) dropped from 50% to 40%.

Syndra- Syndra is seeing some pretty influential changes. Dark Sphere (Q) has had its damage reduced a fairly sizable amount (70 to 50 at rank 1) in the early game, though it will still be the same as it has been at rank 5 (230 Damage). Syndra’s Scatter the Weak (E) has been toned down a bit by making the Dark Spheres pushed by it follow their hitboxes more strictly.

Xerath– Tool tip change. No actual change to the champion, just the description of his Shocking Orb (E)

That’s it for the champion updates in 5.1. I’m eager to see the coming weeks and how these changes will unfold in the pro scene. Part 2 of the article will be released soon, and will cover the map, item and gameplay changes introduced in this patch.