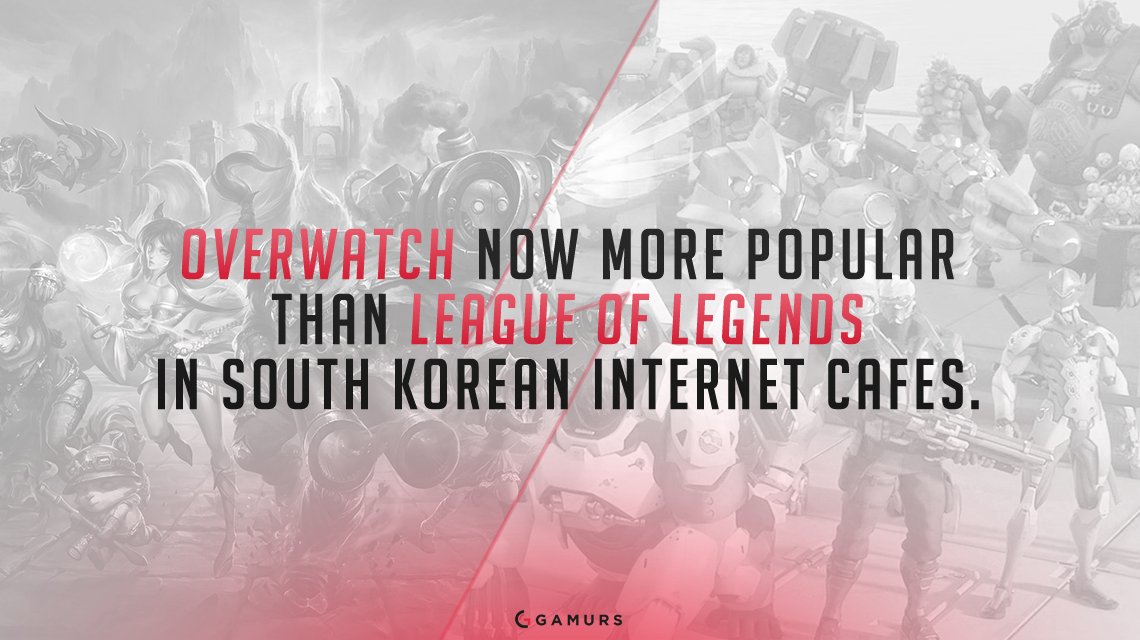 The new first-person shootergame developed by Blizzard Entertainment, Overwatch, which was released in May of this year, isattracting a lot of attention from video gamers, especially inSouth Korea. The extremely technologically advanced country hasalways been a target for game developers like Blizzard and RiotGames, and for the past few years, Riot has dominated the eyes ofSouth Korean gamers. However, that changed rapidly with the releaseof Overwatch.

The graph above, which wasposted on the Overwatch reddit pageshows the popularity of games in South Korean internet cafes. Theblue line portrays Riot Games’ League of Legends, and the orange lines shows Blizzard’sOverwatch. One can see a very clear association between the releaseof Overwatch, and it’s subsequent rise in popularity, withthe dramatic fall of League of Legends. Rather interestingly, theplay rates of the other two games featured, Suddenattack, a Koreanversion Counter-Strike 1.6, and FIFA 3 showed only a slightdecrease. It is also worth noting the fact that League of Legendsis a MOBA game, while Overwatch is an FPS, two completely differentgenres in which people appear to be forgetting LoL, and playingOverwatch, for the time being at least. Also quite interesting isthe fact that the only other FPS, Suddenattack, showed no majorloss in playership.

Gettogold, who are a SouthKorean based company that runs a near majority of internet cafes inthe country, also published a similar graph. Their numbers showOverwatch at a higher playrate then League of Legends by .41%.Overwatch is number one, while LoL is number two on the graphbelow. Note the arrows next to the game titles, indicating aposition change.

The change in which game peopleare playing is not just happening in South Korea; many players bothin North America and in Europe are putting more attention intoOverwatch than LoL. With the recent series of woes LoL has beenfacing with queue times and role selections, it is easy to see whypeople are playing more Overwatch than LoL at this time. YoutuberSky Williams posted a video to his channel with over 890,000subscribers entitled “Is League fun?” He began thevideo by saying, “Before anything, I want to just go aheadand debunk this – I am not quitting League and jumping ship andgoing over to Overwatch.” Though his channel remains LoLfocused, he has posted Overwatch gameplay.

Most players, like Sky, say theyare not giving up LoL, but just enjoying the freshly released gamefrom Blizzard. Whether or not Overwatch can keep up with LoL or ifLoL can retake it’s spot on the top step of the gaming podiumis yet to be seen. Only time will tell, but one thing is for sure;if you have 20 minute plus queue times, why not play a little bitof a new game?

What are your thoughts on the rise of Overwatch, let us know bycommenting below or by tweeting us @GAMURScom.