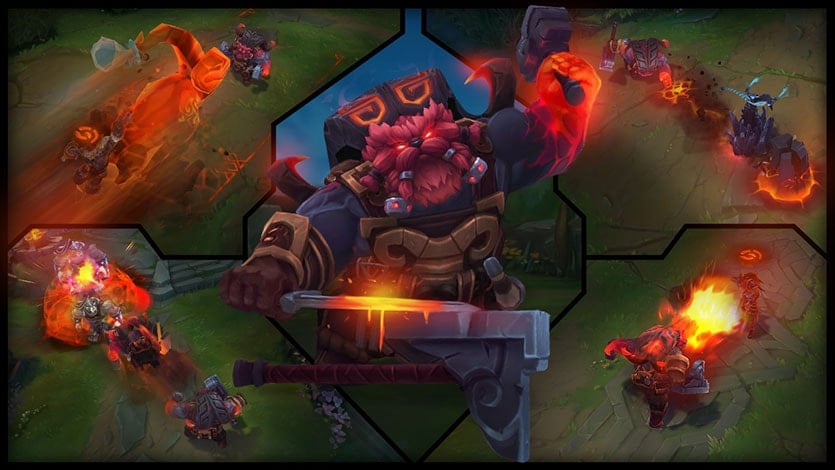 Ornn has had an interesting time in League of Legends since his release in 2017. Shortly after Riot pushed him to the live client, he spent a couple of months in limbo as he was extremely undertuned, and then came a period in which he was too strong as overcompensating buffs were patched in to fix his first set of problems.

After all of that settled down, the pros got their hands on him, and he dominated 2018 as one of the strongest tanks in the top lane, regardless of meta. This was thanks to his crowd control-heavy toolkit combined with fairly high damage for a tank. Riot nerfed him even more after that, but pros still held onto him all the way through the end of the competitive season at Worlds. After such a long time in the spotlight, Riot apparently believes his design needs a second glance, according to the company’s post on the official League forums this week.

The rework just arrived on the PBE yesterday, and while it isn’t a massive list of changes, or any sort of visual update like Ezreal and Akali received recently, it’s still significant. His passive and W are being altered the most, while his Q and ultimate are receiving smaller tweaks of their own.

First up, neither Ornn nor his allies will be able to purchase upgrades to certain items after he hits level 13. Now, when he hits level 11, any upgradeable item he already owns or purchases until the game ends will be automatically upgraded for free. This is obviously a very large buff. Not only that, but for the next four levels after hitting 11, he’ll be able to upgrade one ally item from his list of upgradeable items, too. They’ll need to have purchased the item, and each ally can only receive one upgrade in total. This is also a sizeable buff, as the ally will no longer need to spend gold on the upgrades, just as he won’t have to spend gold to upgrade his own items.

For the most part, we’re big fans of these changes. Not only does it force Ornn to pay closer attention to his passive, which is a really cool system to begin with, but it also incentivizes Ornn to upgrade ally items more often, too. Right now, where his allies need to purchase the upgrades themselves,  most players wait until they’ve bought their last item possible to spend the gold on an upgrade, because it just isn’t worth it. Games don’t typically last that long, so the fact of the matter is the feature just isn’t getting used often.

The concern, obviously, is that there’s literally no drawback to receiving item upgrades worth, in some cases, over 1,000 gold in stats. We assume Riot will nerf some of the upgrades with this being the case, but if they don’t, having an Ornn on your team will automatically give you a monstrous edge when he hits level 11, and he’ll pigeonhole you into buying certain items.

The second set of hefty changes is coming for his W, which has already been through its fair share of changes since his release. When he casts it, he’ll, be unstoppable once again, which was a feature removed from the ability earlier this year on account of it being too strong. The drawback? The ability will no longer shield Ornn, which some argue is the whole point of it. Without it, his W may seem incredibly underwhelming, and that’s our fear as well.

The tweaks to his other abilities are inconsequential compared to the big ones, so if you’d like to find out the specifics about them, you can read about his rework on the official game forums.