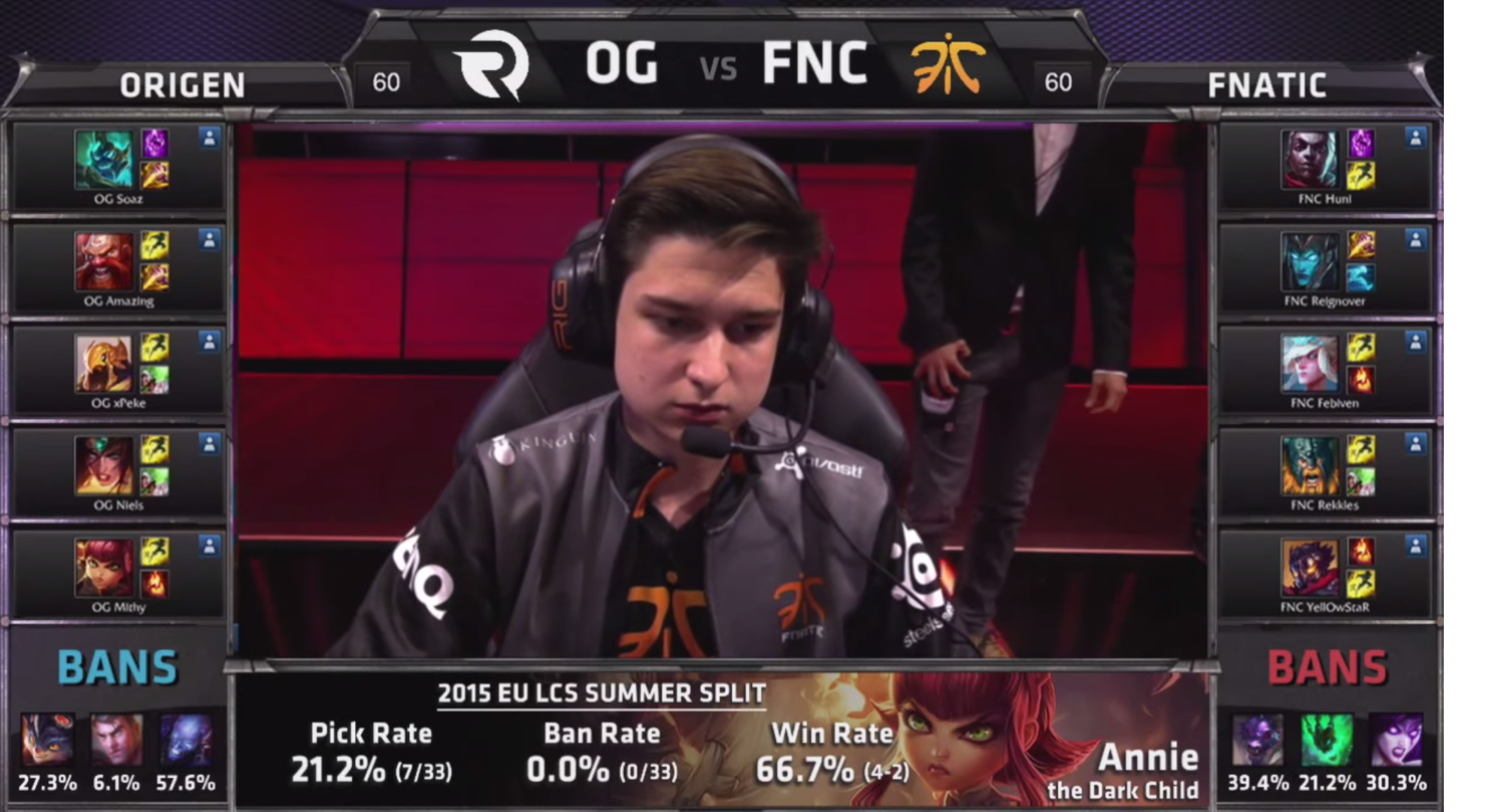 The EU LCS match of the week featured a battle for zone control starring the lineups of Origen and Fnatic. A match with an interesting storylines (players going against their old organization fielding successful rookie talent, a former teammate battling his old colleagues) the match started chaotically and ended definitively with Fnatic remaining undefeated in the EU LCS. Beneath the excitement of the early skirmishes and one off plays exists a complex dance of zoning and objective control which both teams executed well. Looking at the picks and bans, it is easy to see that whoever gets into the neutral objectives first has a distinct advantage over the opposition, and it was Fnatic’s ability to secure control over those areas before Origen which led them to victory.

(The picks shown in the order they were secured)

Origen, wary of Huni’s carry potential, banned away Rumble and the current OP Ryze from star Top while also banning a recently adjusted Jayce.  Origen then first picked Hecarim for sOAZ, denying Huni one of his best champions and rounding out there Huni denial strategy. However, Huni’s pool proved too deep as he locked in Ekko for himself.

Fnatic, on the other hand, targeted mithy support pool with three support bans, suggesting Fnatic wanted to force mithy onto a particular pick. mithy selected Annie later in the draft as a hard engage support, which was preemptively countered by YellOwStaR’s Janna pickup.

Looking at the two compositions, Origen’s favors engaging with champions like Sivir, Annie, and Hecarim while Gragas and Azir can isolate targets or peel, while Fnatic’s tried to kite back using Janna, Kalista, and Viktor before re-engaging with Ekko. Despite the difference in approach, both compositions focus on zone control: Azir with his Emperors Divide and Sand Soldiers can clog any choke point, denying access to the enemy team. However, Viktor serves a near identical purpose for his team, threatening with his Gravity Field, Death Ray, and Chaos Storm, but also has partner in Ekko who can assist by using his Chrono Break clone and Parallel Convergence. As these champions cover the approach, the junglers with a partner focus on the objectives. In Origen’s case, Soaz with his Smite Hecarim gives them an edge in securing Dragon and Baron. On the flip-side, Fnatic with Kalista can outsmite even two does of the jungling spell, provided they get her onto the objectives early enough to stack numerous Rend’s. Whoever gets onto the objective first is going to get it (with the exception of xPeke’s Dragon steal during Fnatic’s second attempt at the beast).

The only concern on paper given Fnatic’s picks and bans was the Olaf pick-up. While Reignover has utilized the champion before and held a 2-2 record on the champion in both his EU LCS splits before the conclusion of this game, the choice of a non-meta jungler when no junglers were unbanned was concerning, especially in the face of Origen’s proven picks. However, the Olaf pick while unimpressive in scoreline brought Fnatic an interesting dynamic to the fights by ignoring all of the CC from Origen’s line up. Shrugging off game-changing ults like Emperor’s Divide, Olaf can always threaten Origen’s back line and either draw cooldowns from Origen or ignore the spells completely.

Both teams understood their compositions ability to control objectives, so of course we see them wait for the objectives to spawn before squaring off at them once the mid-game begins. At 19 minutes, Origen gets onto the third Dragon of the game and claims their second stack easily, requiring only xPeke to move his soldiers to stifle Fnatic’s approach.

Fast forward 5 minutes, and we see Niels picked off in a flank by Huni and Reignover. With a numbers advantage and Origen’s engage enabler down, Fnatic immediately moves onto the Baron. With control over such an objective, Origen is forced to contest by walking into the pit. mithy flash Tibbers into the pit and sOAZ uses Onslaught of Shadows to dive the back line, but Febiven lays down his Chaos Storm and Gravity Field, stopping Amazing and Xpeke from approaching and cutting sOAZ off from his team while YellOwStaR’s Monsoon also blows back Origen. In addition, Huni had prepared a Parallels Convergence ahead of time and proc’ed it as sOAZ entered the pit for its stun and shield Rekkles and Reignover’s execution on the Baron was flawed, as neither secured the objective, but fortunately Huni managed to grab the objective. With sOAZ dead and Baron theirs, Fnatic are able to chase the rest of Origen.

Other objectives fights play in similiar fashion, with Fnatic able to get to them first after acquiring map pressure with the Baron buff. Now to look at Reignover’s Olaf: again, while Reignover’s own play wasn’t anything special given his low kill participation and slip at the second Dragon, his ability to disregard Origen’s zones and walk up to the team served it’s function to draw cooldowns. For example, the dragon fight at 32 minutes shows Reignover using his Ragnarok and Righteous Glory active to follow up on Huni’s engage and close in on xPeke, and is able to walk in Origen’s face with no fear of being CC’d. However, due to his teams inability to follow up, Reignover cannot dive and is therefore left to zone the enemy team for his team to retreat.

In the siege of Origen’s bottom inhibitor tower, Reignover demonstrates Olaf’s aggressive capabilities against Origen’s CC heavy comp. Popping Ragnorak, Reignover is ignore silly things like stuns and slows, landing some Undertows and Reckless Swings before limping away from the fight and allowing his team to clean up.

Later on, after Huni trades his life to kill xPeke, Reignover is able to harass Niels, preventing him from following up on Amazing’s dive onto the back line while Origen  are forced to wait out Ragnarok. By the time they can retaliate, Fnatic joins Reignover and helps finish what he started. Although the Olaf pick was unflashy, Reignover was able to fulfill his purpose in a way no other champion could have.

With the clash of the old guard vs the new coming to a ceasefire for now, Fnatic has secured it’s status as the best team in Europe and remain undefeated. Fnatic came out of the draft phase with a comp that not only answer Origen’s engage, but control objectives as well if not better. With plays from their beloved star Huni, veteran captain YellOwStar, and Reignover’s freedom of movement, Fnatic were able to beat Origen to the Baron and snowball their lead into a smooth closing.