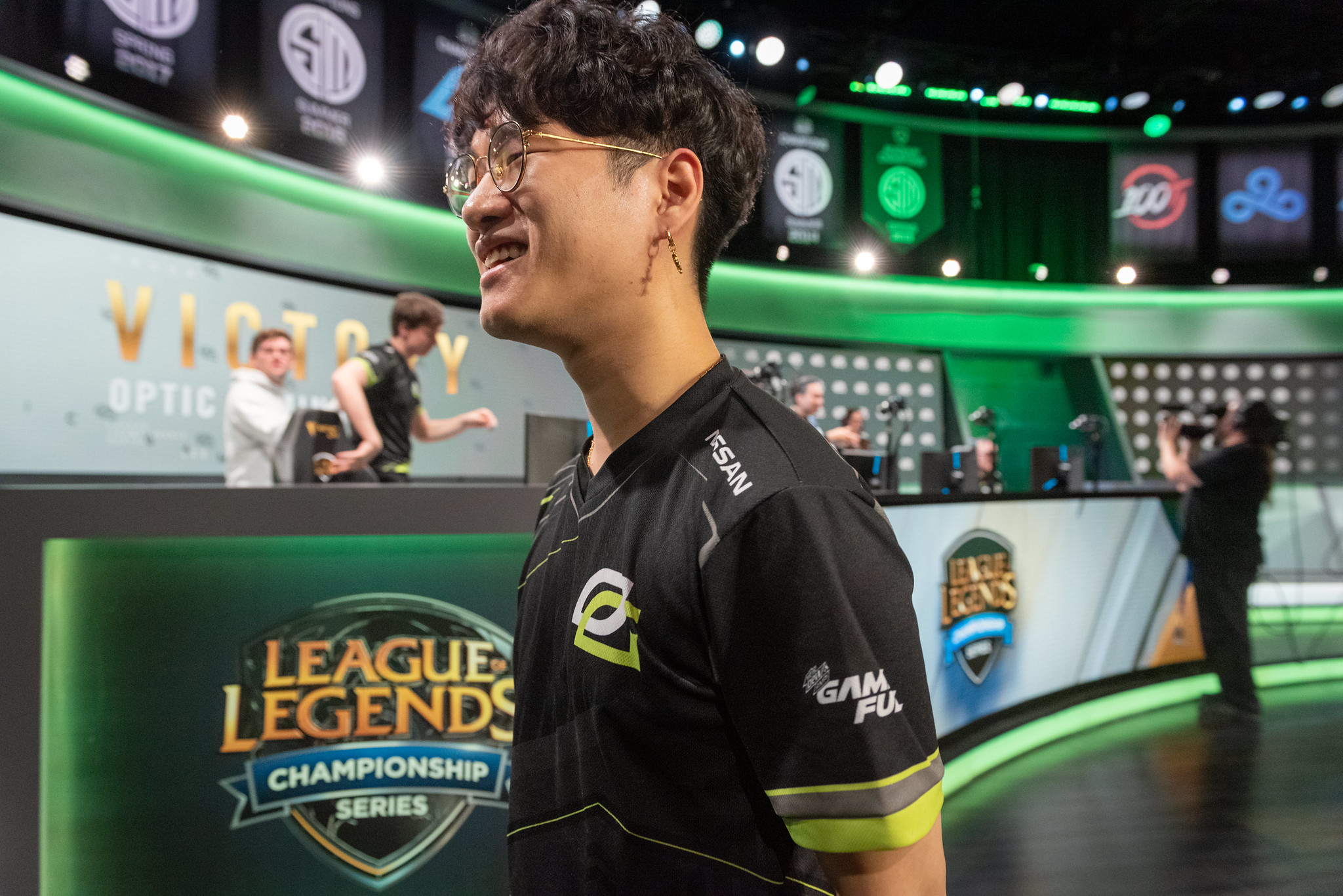 Sitting in an empty press room, hands in his lap, Lee “Crown” Min-ho looks nothing like the man who just carried OpTic Gaming into the LCS playoffs for the first time in the organization’s history.

He’s calm and unemotional even in the face of history, barely cracking a smile at the thought that he just helped his team keep their season alive. To Crown, making the postseason in North America is “nothing special.” While the rest of his team may be dreaming of bigger things like winning the trophy and making Worlds, Crown has a more pressing matter on his mind.

In 2016, Crown was a part of the vaunted Samsung Galaxy squad that swept through the World Championships. In the finals, the squad ran up against SK Telecom T1, the greatest dynasty in League of Legends history. Despite losing the first two games in the best-of-five set, Samsung then won two games in a row to bring the series to a full five games.

But after a 49-minute slugfest, SKT came out on top, leaving Crown and his teammates as the runners-up.

That’s when Crown began to lose his love for League.

For years, League had his passion. It was fun, even as a pro. Now that had changed.

If Crown could just take revenge on SKT and hoist the elusive Worlds trophy, he thought he would finally be happy. He went without eating or sleeping for days at a time, studying his opponents and climbing the solo queue ladder. Crown looks back on this time with regret. He thinks it led to his eventual burnout.

In 2017, Crown and his teammates were given another shot at the Worlds title. They swept heavy-favorite Longzhu Gaming in the quarterfinals and brutalized Team WE in the semifinals. Samsung were on the warpath and the final obstacle between them and the trophy was their old nemesis, SKT.

This time, Crown and his team obliterated SKT in three games, and Crown thought he had finally reached his salvation. He had just won Worlds, taking out his biggest rivals and getting revenge in the process.

Instead of finding the fame he had been searching for, Crown was lambasted by fans. They deemed his use of champions like Malzahar to shut down SKT legend Lee “Faker” Sang-hyeok, as boring—not befitting a championship winner. Once again, Crown felt his mental health worsening.

In 2018, Crown and his teammates, now playing under the Gen.G banner, barely made it to Worlds through the Korea Regional Gauntlet. There, the team went 1-5 in groups, losing out to eventual semifinalists Cloud9 in the process. After his third-straight World Championships, Crown felt crushed. He speaks about Cloud9 bitterly, as if they took away everything from him.

“I lost again and I got burned out when I won the World Championship,” Crown said. “I lost everything, and I forgot who I am. I didn’t have any plans, any goals. I wanted to be happy, but what is happiness? No one knows.”

Following that disastrous showing at Worlds, Crown moved to North America to try to create a fresh start with OpTic. The team missed the playoffs in the spring. But they now have a chance to make up for lost time with the organization’s first postseason berth.

The path for revenge

It’s the final day of the Summer Split regular season, and OpTic are one game out of playoffs. One win over Cloud9 and they’ll guarantee their spot in the postseason festivities. Lose, and OpTic will have to play a series of tiebreakers against either Clutch Gaming or Golden Guardians and potentially 100 Thieves.

Crown is feeling great. To him, even with the weight of OpTic’s playoff hopes on his shoulders, this morning is “nothing special.” Deep breaths, he tells himself. Don’t make mistakes. OpTic have slumped a bit recently, but he’s sure he can carry this squad to a victory over Cloud9. As he prepares for the game, he’s utterly confident in his abilities.

Just under 26 minutes later, Cloud9 storm through OpTic’s base. With 24 kills, they’ve almost forced an OpTic player back to the fountain the fast way once a minute, an insane stat in a professional game. Crown ends the game with seven deaths, one of his worst performances in history, one that he acknowledges as “fucking terrible.”

While relaying the story, Crown stops. There’s a phrase he knows, one that he’s been living by, that he can’t quite capture in English. He brings up a translator on his phone and quickly types something in Korean. When he’s done, he shows me his phone. It reads, “Those who cannot remember the past are condemned to repeat it.”

Watching the games revitalized him. They gave Crown the motivation he needed to reset his mentality and prepare for his matchup with 100 Thieves, and later, Golden Guardians. He says he gave up after winning Worlds and after crashing out of the group stage a year later. He believes that since he didn’t try his best to change his circumstances, he was doomed to fail.

“Maybe [the past] is coming, and I remembered that,” Crown said. “I gave up in 2017 and 2018, and then it’s coming again because I didn’t find a solution or try something. I told myself, ‘It’s time to overcome the past. Let’s try to win again today, and try to meet C9.’”

This is Crown’s year. He can feel it already—this will be the year he finally vanquishes his demons. While he says his mental health still wavers, oscillating between highs and lows, he’s confident that defeating Cloud9 will bring him closer to the closure he needs.

CLG also stand between Crown and his prize, but he’s not concerned with that team. They’re another step in his way to Cloud9. While he isn’t sure OpTic will come out on top—he laughs and replies, “Who knows?” when asked if he’s confident he’ll beat CLG—Crown is more determined than ever to win.

His goal for this year: