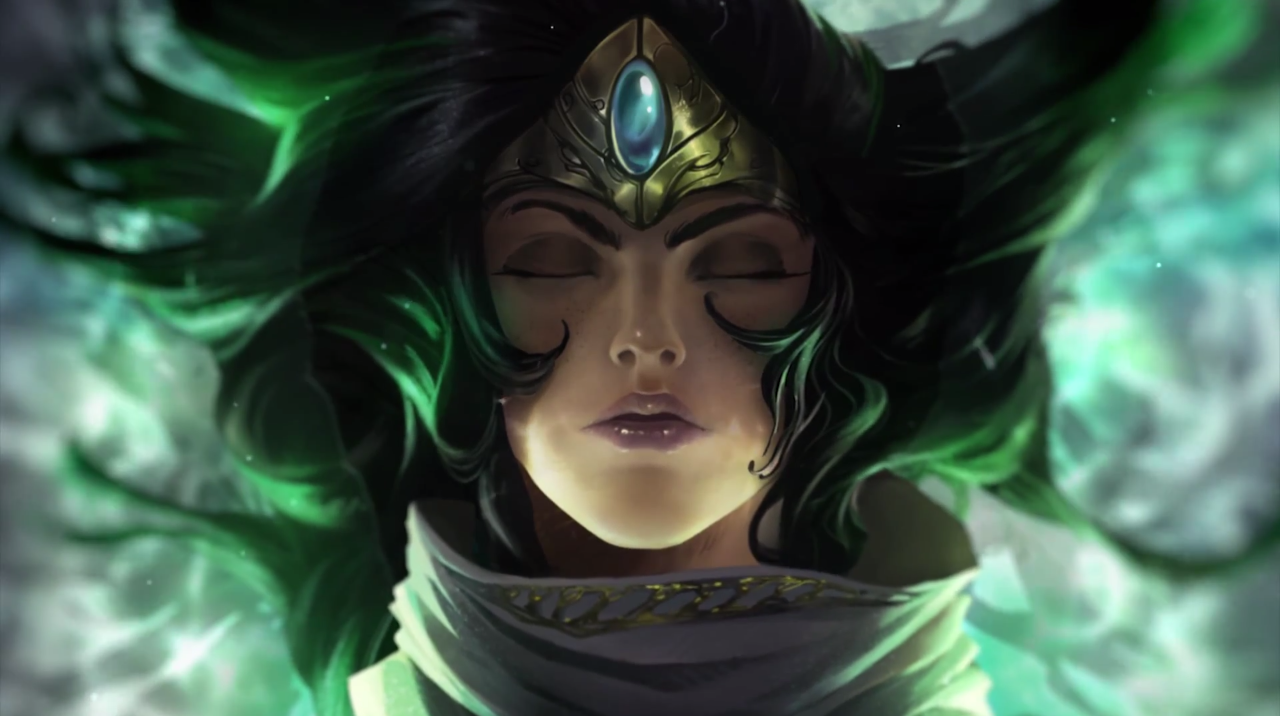 With an increased emphasis on teamfight macroing and rotational play, the Battle Mistress has risen to the top of the ranks as the perfect utilitarian AD carry. Whether it be hard-engage, fast-push, pick, or dive, teams around the world have been placing more and more reliance on the use of Sivir in their compositions to get them where they need to be. She’s not necessarily entertaining to watch nor is she the most mechanically demanding, but her ubiquitous success and impact is unassailable.

This drafting priority doesn’t come as a surprise as uber-aggressive Chinese squads such as EDward Gaming and Snake love to make picks and skirmish around neutral objectives, a place in which Sivir reigns queen. By picking Sivir, teams are able to move in and out of fights with ease, and with scuttle crab available to give additional movement speed on top of On The Hunt, teamfights are prolonged and thus allow mages to dish out more than one spell rotation.

Use this fight around Baron for example, where EDward Gaming played LGD Gaming in the Grand Finals of the 2015 LPL Spring Split. While the 7k gold lead would seemingly foreshadow a clean-cut victory for EDward Gaming, things quickly turn sour as Clearlove and his Rek’Sai engages slightly ahead of his team. While he does go down first, he forces out an Absolute Zero from Nunu and the Frozen Tomb from Lissandra.  Notice Deft’s positioning while all of this is taking place. He makes his way through the banana brush and hugs the edge of the wall, popping his ultimate in the process.

Using Sivir’s additional movement speed to perfection, Deft is able to quickly move in and out of the teamfight, while dealing the most damage as possible.

Notice what happens at this point in time. Deft is able to utilize Sivir’s toolkit to bait out Lissandra’s escape mechanism and to draw attention to himself from the jungler. Once they realize they can’t catch him, they quickly realize that they are far too committed to this fight and move back to peel for imp, in turn allowing pawN and Meiko to reposition for the fight, as you can see in the bottom right hand corner. By forcing LGD to decide between fighting him or peeling, Deft on Sivir prolongs the fight and allows Twisted Fate to get off nearly four rotations of spells and thus dealing enough damage to net himself a pentakill.

A win/loss ratio of 73% is obscene, especially keeping in mind the fact that Sivir was played in almost every single LPL game this season. Sivir perfectly fits the Chinese play style, and if any time is looking to take down the likes of EDward Gaming (most likely) and other Chinese powerhouses at World’s, Sivir is a point of contention.

While the Koreans enjoy moderate success with Sivir, she falls further down the tier of priority AD Carries, due in part to their unhealthy obsession with Vayne. She appears in a little more than half of all OGN games to this date (19 games out of 34) and has drawn two bans.

Korea uses the Sivir to the same effect, but most notably to control the mid-game fights near the dragon pit when teams are looking for their 3rd or 4th dragon.

CJ Entus vs SBENU Sonicboom was the perfect example of how to turn a terrible teamfight into a good one with perfect kiting. SBENU has had control of this game since the very beginning and a fourth dragon would spell bad news. Ambition opens the fight up with a zoning Absolute Zero, followed up by a rather poor Equalizer by Shy. The turning point of the fight comes right after the Equalizer, when Coco launches his Chain of Corruption onto three members of SBENU: Maokai, Sejuani, and Jinx. The second the ultimate lands, Space pops On The Hunt to allow CJ Entus to kite backwards.

Look how CJ is positioned. With Sivir’s ultimate up, all members bar Ambition move towards the mid lane to ensure that the Equalizer and the Chain of Corruption are utilized to its maximum effectiveness, all why Coco launches Piercing Arrows from the backline. CJ Entus then moves in for the kill as all members of SBENU Sonicboom retreat with their blinking red health bars. Denying the fourth dragon from SBENU would allow CJ Entus to stall the game even further, as it allowed them to relieve resources from the dragon area and shift their focus to Baron, which they would later pick up. CJ Entus would go on to win the game after solo queue-esque blunders around Baron by SBENU, and without a doubt did Sivir play a vital role in their success.

Not nearly as successful as the Chinese, but impactful nonetheless, the Korean Sivir is focused heavily on the neutral objectives as OGN matches tend to be much longer than those of the LPL. The ability to prolong skirmishes in order to poke down the enemy team before engaging into a full-fledged team fight is a theme commonly seen in Korean League of Legends, and the Battle Mistress fits right in.

North American League of Legends teams (Cloud 9) are extremely keen on punishing the misposition of their opponents (TSM). While On The Hunt does allow teams to quickly follow up long-range engages (another speciality of North America), Sivir has been ranked just under the number 1 AD carry pick in Kalista, who provides the engage herself.

A recurring theme in the North American scene is Team SoloMid being at the wrong place at the wrong time. The first clip is game 1 of the 2015 NA LCS Spring Split Grand Finals between Cloud 9 and Team SoloMid, while the second is from the 2015 NA LCS Summer Split, where Cloud 9 and Team SoloMid squared off on Opening Day. The clips are quite similar in the fact that TSM was caught in rotation – once by Balls and his game-changing Rumble Ultimate in a choke-point that the “Baylife Bros” should not have been in in the first place, and another time previously by Meteos Q-flash-ulting TSM on Sejuani for a five-man stun.

Sneaky on Sivir was never necessarily “big”, but the speed boost he provides so that his team can follow up on engages proved to be crucial. His Opening Day ultimate allows LemonNation to flank WildTurtle on Nautilus and kill him in seconds, while his On The Hunt during the Grand Finals allowed Meteos to get in position to punish Team SoloMid in the first place.

While the North American season has only just started, Sivir’s impact on the games in which she is picked in is not to be ignored, and it will be interesting to see how NA as a region can look to integrate the champion into their team strategies in order to use her as a take-away from the Chinese.

Not a huge sample size to judge the Battle Mistress, but this may become a problem for Europe in the future. European AD Carries are more prone to picking the likes of Kalista and Lucian, most likely due to the fact that they feel the necessity to ‘carry’ their team.

Moral of the Story: If you don’t know what to pick, pick Sivir.