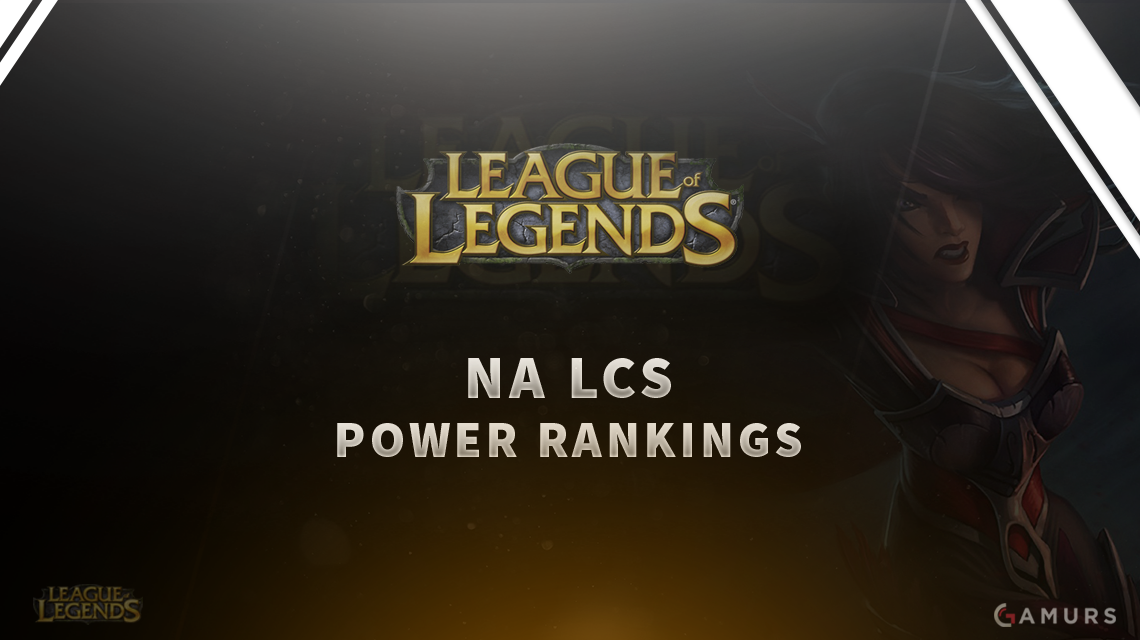 Now, without anymore explanation and wordiness, here are the power rankings for the first week of the NA LCS.

Following a second place finish in the regular season, winning the playoffs and demolishing the competition (apart from the giants of SK Telecom T1) at the Mid-Season Invitational, CLG took the top spot in our first power rankings.

Having no roster changes theoretically puts this team in a very strong position heading into this split and coupling that with their impressive performances all throughout last split and at MSI, CLG look to dominate the North American scene.

There’s not much to say really about CLG. Right now, their success speaks for itself.

The best team in the regular season last split, only dropping one game to CLG and practically the predetermined North American representative at MSI going into playoffs, Immortals fell apart when it mattered most.

In their first match of last split’s playoffs, the team was swept 3-0 by Team SoloMid. This, however, cannot be attributed to a lack of skill or simply being the weaker team. In fact, quite the opposite is true. The regular season was too easy. Immortals got comfortable, started playing off-meta picks because they knew they could still win without going 100% every game. Sure, this can be seen as cocky and a lot of people are saying they deserved to lose because of their questionable strategies (looking at you, Lucian top), but this doesn’t change the fact that Immortals will be a top team in North America this split.

If the players stay focused, they could easily challenge CLG’s crown.

Ever the darling child of North America, TSM never fails to disappoint. Well, except in the regular season last split.

To put it simply, TSM looked awful last split until playoffs came around. When they turned it on, though, they looked nearly unstoppable. With Bora “YellOwStaR” Kim at support, the team was full of all-stars at every position, and finally putting it together. CLG stopped them dead in their tracks though, and YellOwStaR left the team to return to European side Fnatic, leaving a hole in the starting lineup.

Enter Biofrost. The young and unproven support previously played with NA Challenger team Dream Team, and how he meshes with Doublelift and the rest of the squad will likely determine TSM’s success this split.

There’s a lot to say about C9’s last split, but this isn’t the article to say it in.

The roster has gone through an almost complete overhaul during the offseason, with Impact joining from NRG eSports, Meteos reprising his role as the team’s jungler from splits past, and Bunny FuFuu officially snagging the starting role at support. What about the players they’re replacing? An “Balls” Le, Lee “Rush” Yoon-jae, and Hai “Hai” Du Lam are likely heading up the Cloud9 Challenger team, but could potentially be subbed into the main squad or moved elsewhere, as Cloud9 management has stated that the Challenger team will likely be used for young, homegrown talent.

Let’s return to the topic at hand though. On paper, this team looks very, very good. It all comes down to whether or not they can work together. League of Legends is no longer a game in which one player can carry their team consistently to victory. It is team-based, much more so than it used to be. This isn’t really a note particularly for C9, but it certainly applies to them as well.

Plagued by visa issues last split, Echo Fox never fielded their true starting lineup (besides Week 1) until Week 5. This led to a variety of issues and eventually kept the team just out of reach of the final playoff spot. Not this time.

Echo Fox will be able to field their entire roster all split, and they look formidable. The improvements they made last split after Week 5 were obvious and staggering, as they got better after every game. With an entire offseason to practice and work on team chemistry, along with KEITH’s formidable climbing of the Korean ladder, Echo Fox look to make a big impact in the NA LCS this split.

Liquid ended last split in fourth place in the regular season and playoffs, spearheaded by impressive play from rookie jungler Joshua “Dardoch” Hartnett. Based on this stellar play, and the idea that the team could only get better, Liquid actually took fifth in our initial rankings here at GAMURS, but then things changed.

Over the offseason, Dardoch was suspended from the team for disciplinary reasons and he will now play for Liquid’s Challenger series team until he is reinstated on the main roster. During this time, Moon, who struggled heavily last split with NRG, will fill his spot. Because of this, we took a revote and Liquid moved down to sixth.

Can this team win without their all-star rookie in the jungle, or will everything hinge on Dardoch’s return? That is the question. Moon will play a big role in this team’s early success.

After a dismal end to the last split, NRG went into complete roster overhaul mode, only keeping GBM from last split’s squad.

Replacing Impact in the top lane will be Quas, an ex-Liquid player who actually announced his retirement at one point. During his time on the scene, Quas was a player to watch out for, and he will try to keep up that reputation and make an impact (pun fully intended) this split.

NA LCS fans likely recognize Santorin as that one jungler on TSM who never seemed to do all that much, in the fans’ eyes at least. After a rough split overseas, Santorin has returned to show that he’s more than just a ward.

Ohq has had an interesting past in Korea and NA leading up to this point, but he has showed promise at every turn.

KiWiKiD is a big name in the NA LCS, and fans should know his name. The former top laner, now support, has practically been the face of Team Dignitas since 2012. With the team’s departure from the LCS last split, many expected KiWiKiD to retire, but he’s here to stay.

This NRG lineup has the potential to be great, but right now, the consensus says otherwise.

Sadly for EnVyUs, by the time Renegades had their drama and EnVyUs bought their NA LCS spot, free agents were slim.

They did, however, snag a decent roster centered around ex-Renegades players Seraph and Ninja, while also keeping Hakuho and Hermes and later signing Procxin, LOD, and Nientonsoh.

Really, no one has any expectations for this roster. This isn’t to say the players aren’t talented, because they are. It’s more based off of how competitive the NA LCS is set to be this split, and how last-minute this roster was put together. Regardless, this team has huge potential if Seraph and Ninja show up the way we all know they can.

The kings of the NACS, Apex come into this split with a 10-man roster, questions everywhere, and a lot to prove.

Rosters with ten players (Apex with technically have two full rosters in the NA LCS and CS) often struggle to build enough team chemistry to succeed. Subbing players in and out every week keeps chemistry low, and League of Legends, more than ever, is a team-based game. We mentioned this with Cloud9, so let’s move on.

Beyond their strange roster, Apex is not your average Challenger team. These aren’t rookies. Every player on this team has played in the scene for some time and played at a professional level. Skill will not be the problem, neither will mentality. The problem here will be synergy, and let’s just leave it at that.

This team, well there’s a lot of questions to say the least.

Pheonix1 acquired their NA LCS spot from Team Impulse and kept Pirean, Mash, and Gate from last split’s TiP squad. Over the Spring Split, TiP was, to put it simply, not very good. Even going into the Summer Split before they were forced to sell their spot, expectations were extremely low. Pheonix1 added zig and Zentinel to the starting lineup, but projections for this team still aren’t very good.

That being said, never count any team out. Expectations are low, they’re at the bottom of these power rankings, but this is the NA LCS. This team winning some games wouldn’t be the craziest thing that’s ever happened. There’s always an underdog that succeeds.