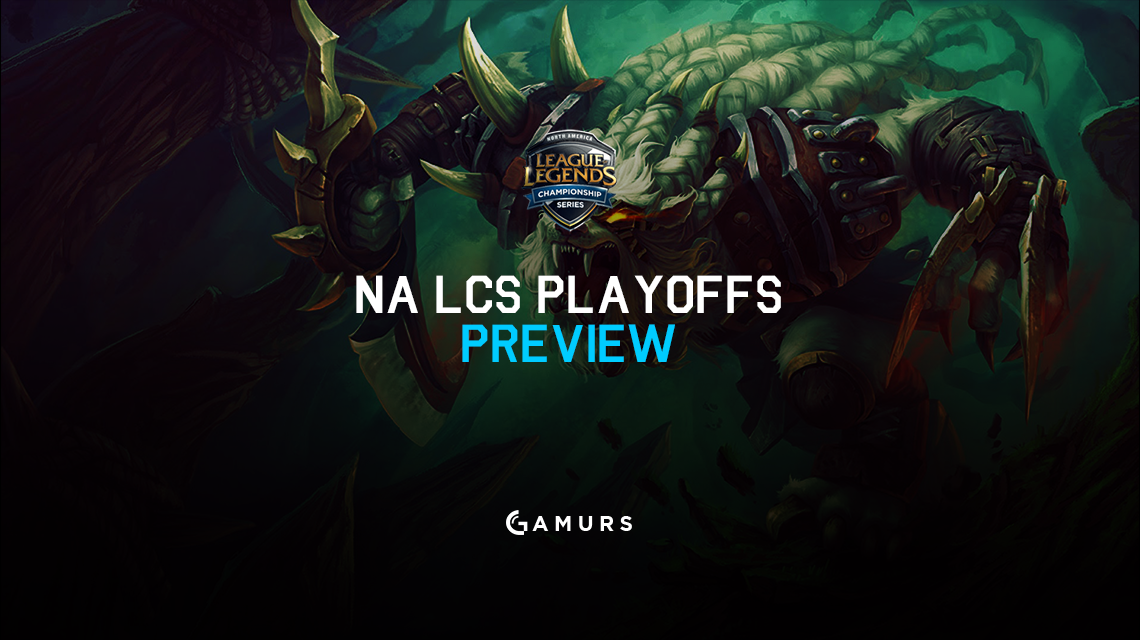 The regular season is behind us and it is now time for the top six teams in North America to back up what they proved in the regular season. Team SoloMid dominated, but last split, the number one seed made an early exit. Counter Logic Gaming is looking to become the first team in NA League Championship Series history to win three consecutive championships, while the newcomers, Team EnVyUs, are looking to prove they are truly here to stay. It should be fun August; an August that will culminate in a champion being crowned at the Air Canada Centre in Toronto.

Our top two seeded teams, TSM and Immortals, respectively have each earned themselves a round one bye, and thus punch their ticket into the semifinals. The other four, however, Cloud9, Team EnVyUs, Counter Logic Gaming and Team Liquid, will all have to play and win three matches before they can hoist the trophey.

Team SoloMid dominated the regular season, and are, without a shadow of doubt, the best team in North America. They have defeated every team in the playoffs twice over so they are clearly the favorites. The pickup of Vincent “Biofrost” Wang has worked well for this team. TSM and their fans hope that the top seeded squad does not suffer from an early exit, like their rivals Immortals did last split. Going into the playoffs, they will be looking for their fourth title, and their first since 2015.

Whenever I find myself writing down Immortals, it always seems that TSM is never too far away. These two teams were in a league of their own during the regular season and the byes they earned are well deserved. Immortals suffered just two losses all split, both of them to TSM. They want revenge, and if they’re going to get it, it is going to have to come in the form of a Summer Split Championship. These two teams have one chance to meet each other during these playoffs, and it is in the finals.

Cloud9 has been the third place team for a vast majority of the regular season; the team at the top of the mid-field that every once and awhile would have a showing that flirted with the likes of Immortals and TSM. They are going to look to string these showings together in the second half of the month, and it starts with a match against newcomers Team EnVyUs. C9 is looking for their third title in the LCS, as their previous two both came through 3-0 sweeps against TSM. If they want to win it all, they will have to pass through TSM once again in the finals, but it is probably wise to take it one match at a time, as Team EnVyUs and Immortals both stand in between Cloud9 and the title.

Speaking of Team EnVyUs, the LCS newcomers are the only one of the three new teams to qualify for the playoffs. This team had a very strong start in the beginning of the split, but began to slow later in the season, barely squeaking past Apex for a playoff berth. EnVyUs is an organization that has had a lot of success in other titles and will look for their first League of Legends championship, though they have to get through Cloud9, IMT, and a matchup in the finals to do so.

On the other side of the bracket, we have Counter Logic Gaming. CLG, contrary to Team EnVyUs, looked like a disaster in the beginning of this split. Expectations for them to perform were very high, since they were the reigning champions and a stellar showing at the Mid-Season Invitational set the bar just out of reach for this team, who one of our editors, Spencer Hester believes were just too slow to adapt to changes. Despite this, the team found their stride later in the season and will look for their third consecutive championship in Toronto.

Team Liquid had a rocky start to the split with the suspension of their star jungler Joshua “Dardoch” Hartnett. This suspension was actually lifted early when the team was struggling during their first two weeks of the split. Once back in the lineup, Dardoch and TL never looked back and cruised through the split, never falling too low in the standings and managing to hover right in the middle of the pack for most of the season. This consistent performance earned them a playoff berth, and one they will look to take full advantage of as they push for their first LCS title.

So there it is, the six teams that will work through the rest of this month and try to earn the most coveted trophy in North American esports. It will include play from teams like TSM, who chase down their fourth title, to teams like Team EnVyUs, who are in their rookie season.

The competition will be close and it all kicks off on August 13 when Cloud9 takes on Team EnVyUs, followed a day later by reigning champions CLG taking on Team Liquid in a best-of-five series. All of the games can be watched on Twitch.tv, but if you cannot watch them live, do not worry. Follow @GAMURScom on Twitter, or check out the brand new GAMURS Live feature on our website.