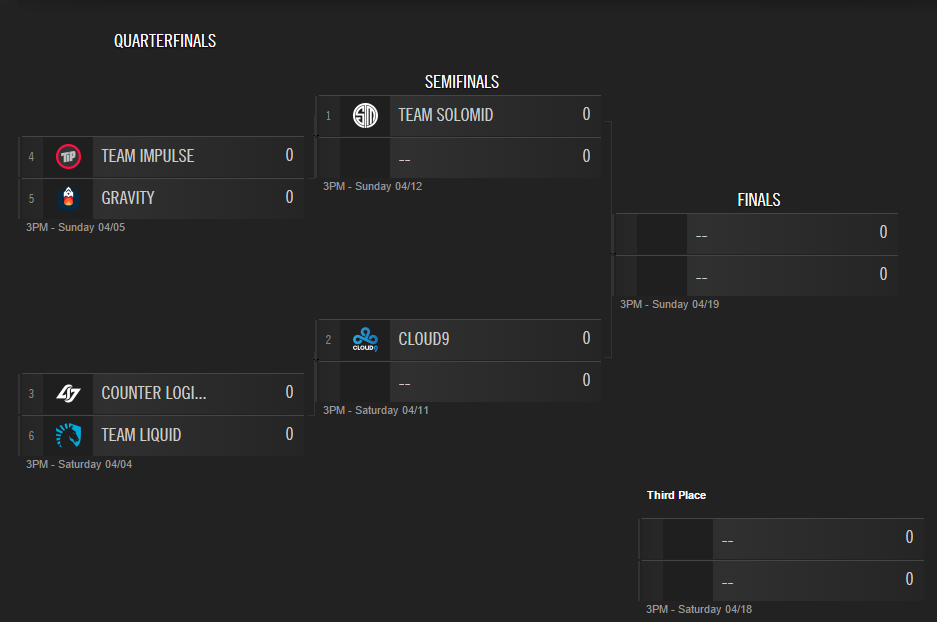 The big change this season is that teams in the quarterfinals aren’t fighting for their livelihood anymore. With the move to a ten team League, all playoff teams along with the 7th place team from the regular season are safe. Because of this, Riot has chosen not to include a 5th place game. Instead, the 5th and 6th place teams will earn the same amount of Championship points. Apart from that, the format is the same as the 2014 Summer Split, with each match being a best of 5.

Above you’ll find the Championship Point breakdown for each Split. You’ll notice that a higher value has been placed on Summer Split performance. This is likely to limit the ability for a team that has fallen off over the course of the season to sneak into the World Championship. That said, earning first or second place in the Spring Split practically guarantees that you’ll have earned enough points to qualify for at least the Regional Qualifier, providing that you finish at least within the top 6 in the Summer Split. If two teams are tied in Championship Points at the end of the season, the team that earned the most Championship Points in the Summer Split wins the tiebreaker. Thus, if one team finishes first in the Spring Split and third in the Summer Split, and another finishes second in both splits, the team that finished second wins the tiebreaker and earns the second spot at Worlds.

The two split system isn’t ideal when it comes to deciding which teams are most deserving of going to Worlds because you have to balance two opposing objectives. First, you want to reward teams for consistent excellence over the course of a full season. In past seasons, the only thing that mattered in the Spring Split was finishing top five in order to avoid getting relegated. With the change to Championship Points, a strong performance in the Spring Split gives your team more flexibility in the Summer Split. Secondly, you want every team playing in the Summer Split to have a chance to go to worlds. This is especially important for newly qualified teams that didn’t have a chance to earn Championship Points in the Spring Split. While such teams will likely have to finish top three to have a chance at qualifying for Regionals, they do at least have a chance. I think Riot did a good job of balancing these two objectives.

Strengths: Experience in Playoffs and with the Best of 5 format that results in the ability to consistently adapt to their opponent’s strategies between games, a strong identity (Every player knows their role within the team and executes it properly), top 3 players at the majority of positions including the best player in North America as their Mid Laner and the best team fighting in the Region.

Weaknesses: Tendency to lose first game in a set. Their bot lane is inconsistent in lane, frequently necessitating a lane swap, inevitably resulting in the opposing team camping Dyrus. Commitment to Mid Priority makes their early game predictable. Inconsistent Shotcalling.? Tendency to give up?early Dragons leaves opening for opposing team to get back into the game.?

Weaknesses: Inconsistent Solo Lanes with small Champion pools (Balls has played Maokai 10 times). Heavily reliant on Sneaky as primary damage source. Can fall apart if Meteos fails to have an impact in the early game. Can fall apart of Hai is shut down in the mid lane and unable to roam and make plays.

Weaknesses: Constant aggression sometimes (often) leaves to over-aggression that can be punished. Reliant on Snowball. Strategic limitations can be exploited by more experienced teams.

Weaknesses: Sub-par Pick and Ban phase that results in weak compositions. Reputation for choking in the playoffs. Prone to positional mistakes as part of a larger team fight weakness.

Strengths: Well rounded with average to above average players at most positions. Unpredictable picks make them hard to plan for. Strong mid game based on cohesive team fighting around objectives, specifically Dragon. Exceptional Dragon control. Mentally strong team that fights to the last second.

Weaknesses: Lack a true carry threat ala Bjergsen/XWX/Sneaky. Over reliance/priority on Dragon makes them strategically limited and predictable/exploitable. Sometimes throw away leads due to a player or players getting caught out of position and dying for free.