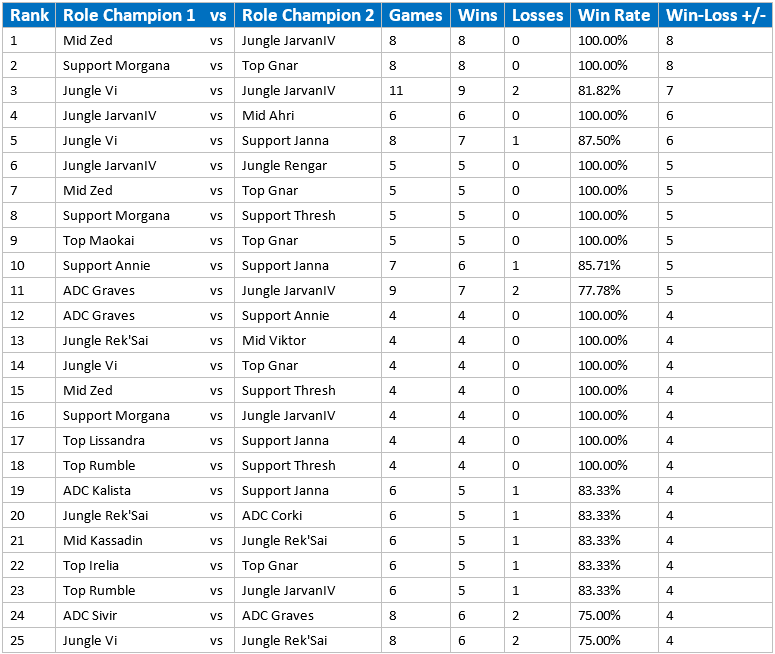 In the NA LCS, counterpicking enemy champions is a common and viable strategy during picks and bans. Teams must weigh and consider the order in which they pick champions, as early picks provide teams with opportunities to secure hotly contested power picks but leave open the possibility for the enemy team to counter. Red side teams last-picking their mid lane is fairly commonplace, as it guarantees them the opportunity to pick a champion that counters or has a favorable matchup against the blue side mid lane.

Many of the common one-sided matchups are known throughout the LCS community, and the casters do a good job mentioning and explaining some of the one-sided matchups when they arise. The casters tend to mention the matchups within roles, but they do mentioned well-known cross-role counters like Support Morgana countering Jungle Vi for instance. Yet some of the other cross-role matchups tend to fly under the radar. I calculated the champion matchups in all 70 NA LCS games this split and created a table with the most one-sided matchups. The table below shows the matchups sorted by win-loss +/-. A champion having a large +/- against another champion doesn’t necessarily mean that it counters that champion, but it seems worth taking note of lopsided matchups and large trends.

Thanks for reading. Please send me a message if you’d like a copy of the data.