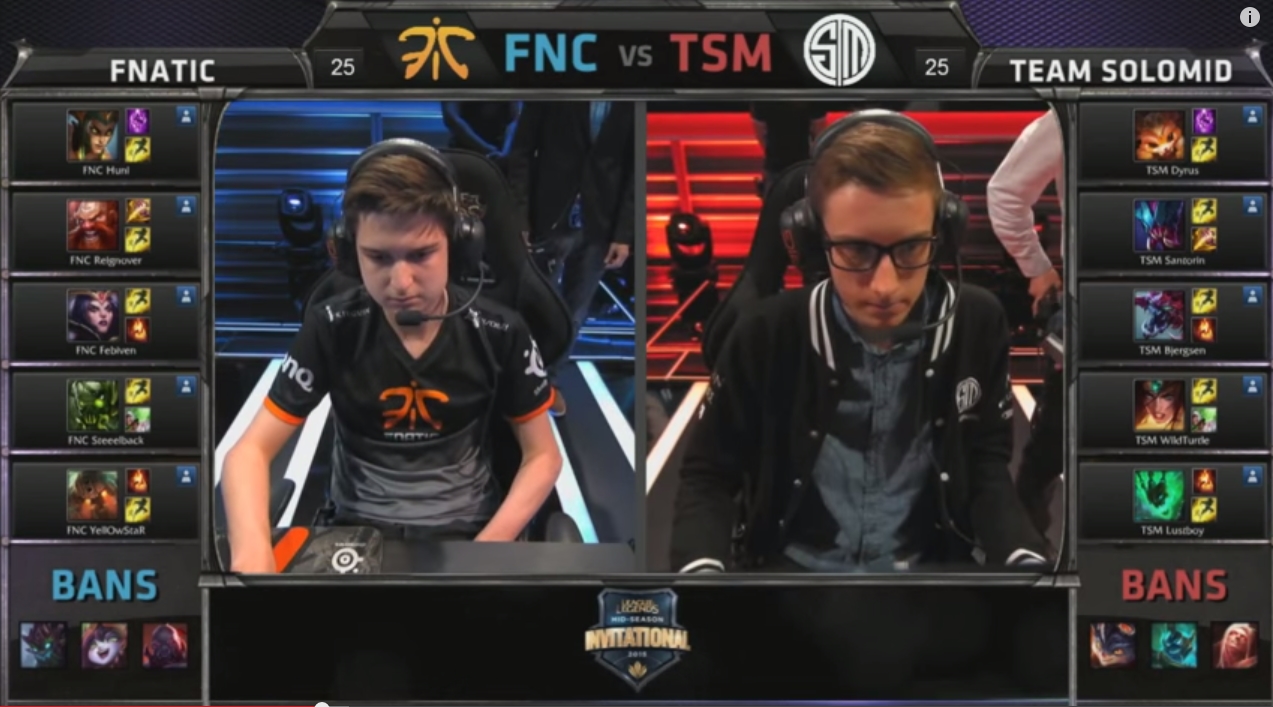 The first Game of the Mid Season Invitational between Fnatic and Team SoloMid offered us an interesting pick and bans phase. Fnatic was able to destabilize TSM within picks and bans, target players and read TSM’s composition.

During the 2015 NA LCS spring season, Dyrus went undefeated on Maokai winning a total of 7 games and had a 10.0 KDA during the playoffs. Dyrus on Maokai fits TSM’s style perfectly. Give Maokai to Dyrus and let him zone out enemy carries for the two main threats on TSM (Bjergsen and WildTurtle) to deal damage.

Huni had a very impressive run in the playoffs on Rumble. His equalizers proved to be deadly in skirmishes.

While TSM has shown to flex Lulu support and top lane, this is another Dyrus targeted ban. Dyrus may not be the most impressive Lulu player to have graced the game, but he does what he has to. Provides peel and support to his carries with this utility support mage. Fnatic does not run Lulu at all, nor is used to playing against it. Smart ban.

Questionable ban from TSM. Huni only played Hecarim once during the EU LCS playoffs. Huni does play Hecarim if we look at his Solo Queue records (60 games played with a 3.15 KDA). It is the most banned champion against Huni, being banned 12 times consecutively.

Another tank Dyrus has played very well on. Dyrus went 4-0 on Sion during the Spring and had an impressive showing on the champion at IEM Katowice. This is the point where TSM could be in some trouble. We know Huni is capable of breaking out champions such as Cho’Gath, Lissandra, Lee Sin (hopefully not) and even Ryze. However if we look at Dyrus…what does he have left after 5 top lane bans? Gnar? Gnar has not been Dyrus’ best champion. TSM has shown an inability to play around Gnar’s ultimate transformation as well as Dyrus falling way too far behind and being a non factor. It feels like TSM is being baited into Gnar at this point.

Another Huni target ban with Dyrus implications. I see no need for TSM to ban Vladimir. Yes Huni did go 2-1 in the playoffs and show he was a significant damage dealer for Fnatic but we’ve seen how astronomically hard a Vladimir can be denied. If we look at the recent Samsung vs SKT T1 series, we can see how hard a Vladimir can be shut down in a 2vs1. Samsung put Bliss on Vladimir in the bot lane expecting a 2vs1 from SKT. SKT realises this and decides to switch the bot lane back to the bottom side of the map. This completely nullifies Vladimir and he is even unable to reach 100 CS by the time the game is over.

Fnatic “wins” the banning phase. They deny Dyrus his most successful champions as well as have attracted bans that could have been addressed with with a lane swap. It looks from this point that Fnatic are baiting Dyrus into Gnar in an attempt deny it from Huni.

TSM should have absolutely not banned Vladimir. If Fnatic choses to get Vladimir, just lane swap. We know TSM loves to lane swap from good botlanes to get Turtle an advantage and leave Dyrus on an island; so why ban Vladimir?

Deny pick from Bjergsen. EU has not run Urgot as much as NA or Korea. Good flex pick for Fnatic.

Dyrus falls for the Gnar bait…TSM picks Gnar in an attempt to keep it out of Huni’s hands and to give Dyrus something he is somewhat comfortable playing. We know Dyrus’ Gnar is pretty poor so look to Fnatic to pick a champion Dyrus is not used to playing against in the top lane to deny Dyrus. TSM should already be thinking about a lane swap at this point.

Strong support pick for YellowStar coupled with the Urgot. We’ve seen CJ Entus run this bot lane over and over while looking for the 2vs2 lane to exert their early game dominance. The Leblanc seems like a comfort pick for Febiven while denying it from Bjergsen.

TSM’s most go to bottom lane as of late. Sivir provides excellent utility with “On the Hunt” and can use “Spellshield” to avoid CC coming in from Nautilus. TSM should be looking to lane swap since Sivir will tend to get bullied out  by Urgot and Nautilus.

This is where Fnatic’s master plan is revealed. Not only do they have a huge amount of crowd control and tankiness, but now they have even more with Cassiopeia. More importantly, Bjergsen was most likely looking to pick Cassiopeia. This would give them a nearly identical composition to what SK Telecom ran vs the GE Tigers in game one. Huni now gets a champion he can bully Dyrus with if TSM opts into the 1vs1 and 2vs2 lanes and they deny Bjergsen a key champion in their composition.

TSM is looking to lick their wounds at this point…might as well pick Cho’Gath right? He’s pretty cool and all. Bjergsen’s is going to attempt to shut down Leblanc but that is not where the carry potential is. It’s Huni’s Cassio they should be afraid of.

Keys to the Game: