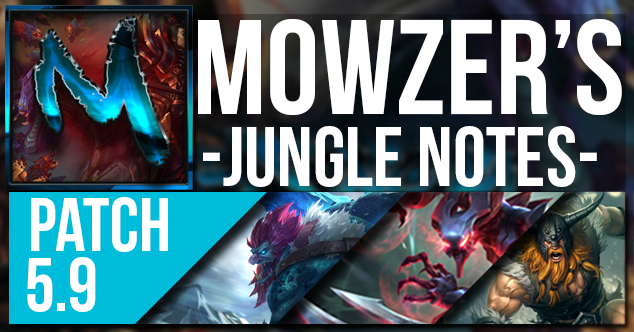 Hey Everyone. Mowzer here. There were a few changes to the jungle this patch and an attempt to nerf to top laners taking advantage of cinderhulk. These notes focus on changes directly impacting the jungle and junglers. I will not be going over every change in the patch. For the full list of changes check out Riot’s official patch notes for patch 5.9 here.

Impact: Dragon has been a bit too easy lately and various junglers are having no issues soloing it early on. Riot has decided to kick up the damage output a bit to help counter the early dragons. This shouldn’t make much difference come mid- and late game, but early dragons will be a bit more dangerous now. Certain junglers, such as Nunu and Fiddlesticks, shouldn’t be too worried.

Impact: Cinderhulk was just too strong and Riot decided to tone it down some. This is not item-breaking nerf though. The damage output from it won’t be ramping up anymore and the base damage is down too. Also, it won’t be getting as much damage per level either. They did add 100% bonus damage to monsters to help compensate the junglers and not completely nerf the item into the ground. The bonus health and cost-effectiveness are still left in tact. These nerfs weren’t aimed solely at the junglers. It was more aimed at top laners taking smite and cinderhulk. This nerf won’t kill tank junglers, but it will reduce the damage dealt in longer fights. I don’t think it is a massive nerf to tank junglers overall. Clear speeds are still good and it still provides efficient stats.

Impact: Here is another nerf that had top in mind too. Many tops were taking smite and buying skirmisher’s with cinderhulk enchant. Riot is never a big fan of laners taking jungle items out of the jungle. This should help lessen the influx of people using challenging smite. It was so strong and I was running it on almost every jungler I played. It’s still a solid choice, but it won’t be as effective as before. You can only get about one proc of the true damage off now. I won’t be taking it as much, but it still has its uses.

Impact: This is a mild buff to Xin Zhao, but it isn’t anything amazing. I don’t think this change will make him top their. He is still the same champion he always was. He is my original jungler and I enjoy playing him, but he is an all-in champion that lacks an escape. Ghetto Jarvan is getting better, but he still has some issues.

Impact: This is an odd buff. I don’t think it is a massive change, but it will help him some. He is still going to have the same kiting issues he always had and a good team can still keep him away from the carries. He is strong early-mid game, but ADCs should still be able to out scale him late game.

Impact: This is going to make pillar a lot stronger. It will slow for a bit more and knock targets back a bit further. This should allow for more playmaking potential. This is a good buff for him in top and jungle. He does well against the tank meta, but his build path isn’t always the greatest and he can have issues getting to his targets.

Impact: This is a small buff to his E damage, but it isn’t anything extraordinary. The big increase to its damage is only at the first and second ranks. It won’t help him clear much faster and it isn’t going to catapult him to top tier. He doesn’t exactly fit into the tank meta and there are just other champions I would prioritize over him. He’s still a solid pick.

Impact: This is a buff and a nerf at the same time. It is a nerf aimed at weakening top Hecarim and is an attempt to shift him more into the jungle. He’ll be able to clear camps more easily now, but he’s going to have more mana issues. Neither top or jungle will be devastated by the mana cost increase. He is still going to be a great pick.

Impact: This is mostly a nerf aimed at allowing more counter-play to Riven. The movement speed decrease isn’t massive, because she mainly relies on her abilities to get around. Her ultimate is going to be a lot easier to dodge now. She’s still going to be a pain in the butt to deal with, but now there is a bit more counter-play.

This wasn’t a really big patch. The main focus was aimed at curbing the cinderhulk users down some and help deal with the mass influx of challenging smites. Cinderhulk is still a fantastic item that offers great health scaling and amazingly efficient stats. Skirmisher’s saber is still a good buy, but it isn’t going to be as useful as it was before. Riot really wants to get the jungle items out of the lanes and back into the jungle. This seems like a decent attempt to do so. The buffs and nerfs to champions this patch aren’t anything game changing. I am glad to see Riot doing minor tweaks here and there and not over doing things like they have in the past, looking at Olaf and Evelynn. I don’t think the buffs to Xin Zhao, Nocturne, and Olaf are going to make them superb junglers. They are just small buffs to help them compete with the other top junglers. I am excited for the Trundle buff. This should allow for some fun playmaking. It’s not a game changing buff either though. I hate Riven, so nerfing her is always a good time for me. There are a lot of strong and viable junglers out there. Who’s ready for some Jungle Ashe 2.0?

TL;DR – Not a ton was changed this patch. Cinderhulk isn’t going to deal as much damage now and challenging smite doesn’t last as long. There were a few mild buffs too.