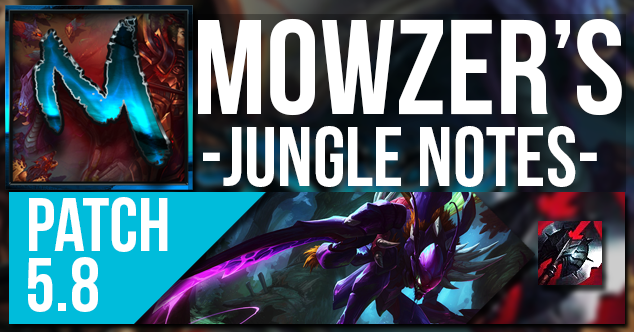 Hey Everyone. Mowzer here. There were only a few changes to the jungle this time around. These notes focus on changes directly impacting the jungle and junglers. I will not be going over every change in the patch. For the full list of changes check out Riot’s official patch notes for patch 5.8 here.

Impact: The entire bonus 6% AD issue was rather interesting. I wasn’t 100% sure about the specific issues it was having, but it seems that there was an issue with calculating the bonus damage with various champions and abilities. This was a result of the system assuming that everyone was using a 1.0 AD ratio. The changes to the buff will make, those with the buff, auto attacks slightly stronger, but this will result in marginally lower damage from physical spells. Champions with a lot of AD or have abilities with a ratio higher than 1.0 won’t have this issue though. This adjustment will help to correct the inconsistencies with the buff, but it won’t be making or breaking any champions in the process. Every bit of damage does add up though.

Impact: I was very happy to see the changes to black cleaver. I don’t see the item being rushed early on, but it should be a strong item on various champions as a third or fourth item. The flat armor pen is no longer on it, so various junglers, such as Kha’zix, won’t want it right away. That and the build path isn’t the most amazing for him. I can see it being useful on him mid-late game though. The flat armor pen on burst champions is much stronger. Black cleaver will be strong on more tank-bruiser champions that don’t rely on burst damage to take down the target, such as Xin Zhao, Garen, Olaf, etc. This should be very strong on Xin Zhao. It will allow him to stick to targets more easily and it does well with his passive. I think this will do well in the top lane on champions like Darius and Garen. It will be interesting to see the builds that arise from the change to this item.

Impact: This is not a massive change for recurve bow. It will be slightly more expensive now (200 gold), but will have 10 more additional damage and better item pathing. Items built from it still cost the same to make. The item on its own isn’t very good. The biggest improvement to the item is that it now builds out of something and doesn’t need to be bought flat out.

Impact: This is a great buff to BORK. It will now offer more sustain and help to combat the tank meta. Also, it will help to survive against thornmail. The damage output from thornmail before was, typically, greater than the sustain from BORK. This is more of a buff for ADCs, but there are various junglers that do use BORK too, such as Xin Zhao, Shyvanna, Evelynn, etc.

Impact: There isn’t much different here. Wit’s end just has a better build pattern and the cost of buying it remains the same. I don’t like the item overall and it doesn’t work too well on many junglers either. I’d rather just get a visage/banshee veil/hex drinker for magic resist or a BORK for attack speed and sustain.

Impact: Here is another item affected by the recurve bow changes. It will have a slight bit more damage now and have a better build path, but the item just isn’t used much in jungle or in this meta. It has fallen out of favor in the tank meta. The only jungler I ever saw build it was Kayle and she hasn’t been the same since the jungle camp reset change.

Impact: The enchant remains the same, but it has a slightly different build path now. Recurve bow costs a bit more, but will put out a bit more damage. This won’t change too much for those that get devourer. The enchant isn’t in a very good place, to be honest. I think it could use a bit of love. Not many junglers can use it effectively and it takes a while to become cost effective.

Impact: This item is amazing and fits perfectly into the current cinderhulk/tank meta. It was so good that even some non-mana champions have been taking it. It lost a bit of health, but it isn’t a nerf that renders the item useless. It is still a fantastic item for various champions, such as Gragas, Nautilus, Skarner, etc.

Part 3) Champion Changes (There are several changes to champions such as Garen, Morgana, etc., but I will not be going into detail on them.)

Impact: This is a helpful buff for lane and jungle Mundo, but it will be felt more in lane. Mundo will now be able to retain more health in lane while last hitting creeps with Q and will have a bit more health while jungling too. This change only applies to the killing blow, so spamming Q on camps won’t be any different.

Impact: It’s happening! Kha’zix has been lagging behind in this jungle. His sustain was lacking and this was forcing players to buy more potions to keep alive. This resulted in more gold being spent on pots instead of wards and items. This buff might seem small, but it will help him in and out of the jungle.

Impact: This is mostly a quality of life change for Shen. He now will be positioned in between his target and the closest visible enemy champion. It will be easier for him to peel and get to hostile targets more easily. Shen isn’t played that often in the jungle, but the top smite/teleport and smite/ignite Shen players will find this rather useful.

Impact: This was a rather annoying bug for Warwick. Sometimes turning off blood scent to sneak up on a target would backfire when it would take two additional seconds for it to kick back in. It would happen sometimes in fights too and instead of a kill the target would slip away with only a small gap remaining. This ability working correctly will make it easier to stick to targets.

Impact: This is a rather impactful nerf to Sion. He won’t be able to detonate his shield as quickly and the bonus damage from his maximum health, at earlier ranks, is lower. His laning and jungling will both be hit, but this nerf is aimed more at his laning phase. He is still a strong pick, but his early game damage has been edged off some. His late game damage still remains intact.

Impact: Nunu got a nerf and a quality of life change this patch. He won’t have as much health, but it’s not an insane blow. He is losing around 100-120 health between his health growth and the bonus health from cinderhulk. This should bring him more in check, but it’s not a nail in the coffin by any means. His change to blood boil is a welcomed change. Those that self-cast a lot will now apply their buff to the nearest allied champion and the buff won’t go to waste. This is the same treatment that Mordekaiser already got on his W.

This patch was aimed mostly at AD champions and some of the items they use. BORK should help ADCs deal with tanks better now. There were a few buffs and nerfs to different champions, but none of them were very game or meta changing. I am surprised that Riot didn’t try to kill the top smite-cinderhulk meta. They, typically, hate when laners use jungle items. That’s one of the reasons why they made it so you need smite to buy one. Kha’zix will most likely be making a comeback with the changes to his heal and I am excited to play him more myself. My favorite part of this patch was the change to black cleaver. It will be interesting to see what people try out with it and which champions thrive with it. I think it is a great fit for Xin Zhao and I can’t wait to try out new builds with him. All of the stats go well with his kit and it should be a nice boost for him. It will allow him to stick to his target more with the movement speed increase, stacks with his passive, and lowers his cooldowns. Lower cooldowns on E allows for him to dash almost constantly to the target he wants and keeps them slowed in the process. I can see other junglers doing well with it too, such as Wu Kong, Darius, Olaf, etc. This could result in more junglers being played, but only time will tell. Raid Boss Garen will be happily spinning around the top lane with his slick new black cleaver.

TL;DR – Sion won’t be dishing out the damage as much early on and Kha’zix will be clearing a lot easier. BORK got a much needed buff and the bonus AD from rank 1 buff from Dragon has been tweaked.