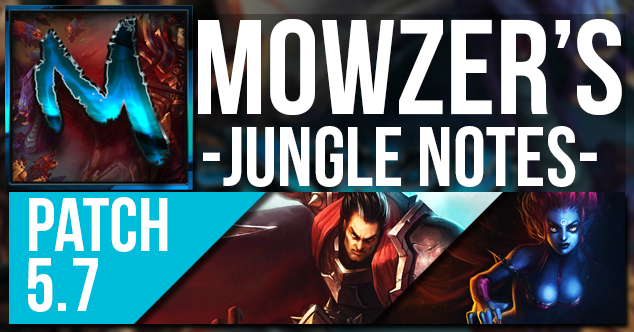 Hey Everyone. Mowzer here. There were only a number of changes to the jungle this time around. These notes focus on changes directly impacting the jungle and junglers. I will not be going over every change in the patch. For the full list of changes check out Riot’s official patch notes for patch 5.7 here.

Impact: Cinderhulk has 50 less health and will cost 50 more gold. This nerf toward the tank junglers will be felt. It will take a little more gold to obtain and not reward as much health. This isn’t a game changing nerf to tank junglers. Cinderhulk still has its core features left intact.

Part 3) Champion Changes (There are several changes to champions such as Garen, Morgana, etc., but I will not be going into detail on them.)

Impact: This is a welcomed buff to Darius. He won’t go oom nearly as easily and ulting late game won’t be as punishing to him. This is a larger buff to top Darius, but those fans of jungle Darius will rejoice.

Impact: This is a rather nice buff to her base damage on Q. This will help her clear speed and overall damage output. I am certain you will be seeing her in solo Q more often. She’s been slowly making a comeback on the KR server for a month or more now.

Impact: This buff means that Shen will be able to ult more often, especially at rank 3. This buff helps both top and jungle Shen, but has a larger impact on top Shen. Small buffs here and there like this are definitely helping him make a comeback.

Impact: This is both a nerf and buff to Rek’sai. She won’t have as much damage from Q, but she will be able to use placed tunnels more often. She still will be a great/strong pick, but her damage output will be slightly lower. Being able to use placed tunnels more often will be nice though. This will allow her to traverse the map more quickly and reuse tunnels placed in fights, if not already cleared.

Impact: This is a nerf directed at AD Fizz and is an attempt to buff AP Fizz some. AD Fizz won’t be able to shred tanks nearly as much by stacking attack speed. He still should be viable as AD, but he won’t be able to go super tanky and destroy everyone in the process. Expect to see more laning AP Fizz again.

Impact: This change mostly hits Hecarim’s top laning ability, but it will hinder him in the jungle too. He won’t be regenerating health and mana nearly as quickly as before. The means he will be somewhat lower from clearing and this might force him to back or take less risks early on in the game.

Impact: Maokai won’t be able to sustain as much from his passive early on in the game. It’s not a massive nerf, but it will be felt. Later on in the game things will remain the same. This will hit him in whichever lane/position he is playing in.

Impact: This nerf is rather big one. Both her base health and health per level have been lowered. This will leave her more vulnerable and she won’t have as much health to clear the jungle with. This nerf won’t make her unplayable, but the loss of health will be felt.

Riot is trying to lessen the power of the tank-jungle meta a bit this patch. It doesn’t appear they have intentions to change it, right away. It’s good to see Riot buffing and nerfing champions over the course of a few patches and not doing it all at once. There won’t be nearly as many jungle Fizz picks as there was before, but I assume some will still give him a go. Prepare yourselves for more Eve picks and possibly Shen too. This damage buff might be what she needed to get back into Solo Q play. I’ve been testing her myself and she feels much stronger now, especially in the early-mid game. Be ready to see more smites in game too. Top laners are catching on to the challenging smite + cinderhulk top combo. It will be interesting to see what Riot does to solve this problem. They are not a big fan of jungle items being used in lane.

TL;DR – Cinderhulk got a nerf, but the changes are aimed at bringing the item in line and not remove it from play. Various champions got nerfed while ultimates got buffed. Brace for yourself for more Eve, she’s coming.