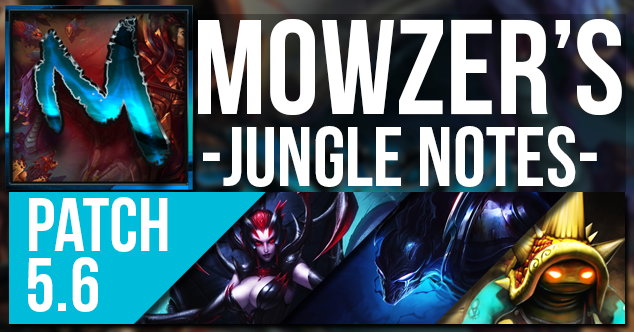 Hey Everyone. Mowzer here. There were a few changes affecting the jungle this patch. These notes focus on changes directly impacting the jungle and junglers. I will not be going over every change in the patch. For the full list of changes check out Riot’s official patch notes for patch 5.6 here.

Impact: This is a great buff for everyone, especially the junglers. This will allow us to gain more xp post level 4 and try to keep up with the laners. It’s not a drastic level change, but it is a welcomed bonus for those clearing the jungle. Many junglers have a difficult time keeping up with the rest of the team and this is even worse when we fall behind. This should, hopefully, help close the level gap some.

Impact: Securing the scuttler will no longer grant a larger field of vision and you cannot see the baron or dragon, unless dragon has been pulled out. It still will provide vision of those passing through the area. It’s a mild nerf to securing the scuttler, but it’s a buff for the enemy team.

Conclusion: Scuttle crab won’t provide as much vision as before, but junglers will be gaining most XP post level 4. This should help us keep up in levels more easily.

Impact: Chalice is a rare item for junglers, but there are a few that might build it. Knocking 100 gold off of the price tag will allow it to be purchased earlier but not by an insane amount.

Impact: Chalice is rarely seen on a jungler too, but it is possible a few junglers could purchase it. I can see it being used on Diana, but I wouldn’t recommend it though. Both of these buffs will allow for a greater replenishment of depleted mana and that in turn means that more spells can be cast. I highly doubt it will be used much in the jungle though.

Impact: I hadn’t seen this bug myself, but it is good that it was fixed. There are a number of junglers that build Righteous Glory and having it not work properly could result in a fight being lost or even the game.

Conclusion: Not much changed for junglers. The rare few that go the Athene’s route will be happy and those building Rightous Glory should have less bug issues.

Part 3) Champion Changes (There are several changes to champions such as Twitch, Singed, etc., but I will not be going into detail on them.)

Impact: This won’t help his early game or clearing speeds, but it will allow him to have a greater impact in fights. Sometimes it can be hard to get blood well stacks going and they are very important to his DPS. Without blood his attack speed is lower and he will regenerate less health after using his passive.

Impact: The majority of her changes are buffs. The only downside to this patch for her is her 5 movement speed lost in human form. I am not completely sure what they were aiming for with that change. The rest of the changes are mostly QOL (quality of life) changes. She has a faster spider form and her E got some love to it. Her damage remains unchanged though.

Impact: She will now be able to shadow walk sooner as the game goes on. This will allow her to slip away more easily and regenerate mana more quickly. She won’t get the passive movement speed anymore, but the ability to lower the cooldown on W should help her out more when chasing enemies.

Impact: This is a small but solid buff to his early and mid game. Shorter cooldowns means more changes to use the ability. Sadly, it remains the same at rank 3.

Impact: Lower mana costs are always a good thing. This will allow him to use Q more often and not starve for mana as often. It is a mild early rank buff, but the mana does decrease more and more as it is ranked up.

Impact: It doesn’t shock me that Riot nerfed her so quickly. She was and is insanely powerful. She will have less percent damage and targets not directly hit with the ultimate won’t be slowed as greatly. She is still a strong pick for solo Q and this isn’t a nail in the coffin for her.

Impact: This nerf was aimed mostly at his ability to clear the jungle as quickly. The nerf to Q will not lower his laning damage or damage versus champions at all, but he will clear slightly slower. Also, his E will no longer do as much pass through damage. This will gimp him across the board some, but it’s not a massive nerf overall.

Impact: I haven’t witnessed this bug either, but I can only assume it was dealing more damage than intended due to the fact that it was not turning off. Technically, it would be a nerf if that were the case.

Conclusion: Riot is trying to bring more junglers into the fold and lower the power of Sejuani and Sion. The buffs are welcomed, because it should allow for a few more junglers to be seen in Solo Q. The nerfs to Sion and Sejuani hurt, but they aren’t crippling enough to knock them off of the chart.

There were a number of jungle and jungler changes again in this patch. A great deal of junglers were buffed and a few were nerfed. Junglers will be gaining more experience from camps as the game goes on and a few struggling champions got some buffs to help improve their performance. Sion and Sejuani got smacked a little with the nerf hammer, but it shouldn’t slow them down an insane amount. They are still very strong, solid picks. Hopefully the QOL changes to Elise will help her some, but she still may have issues with competing against the other junglers. It will be interesting to see if Evelyn and Nocturne will be played more. Eve has already been making a comeback, slowly, on the Korean server for a month or two now. Prepare for a bit more Nautilus. He’s an amazing tank atm and has a fantastic amount of CC. Take care!

TL;DR – Jungle camps now offer more XP post level 4 and a number of minor buffs and nerfs were handed out. Take care and best of luck!