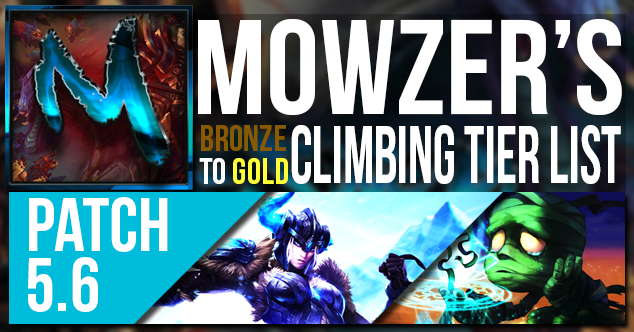 Hey everyone. Mowzer here. Here is my bronze to gold “climbing tier list” for patch 5.6. This is not replacing my normal “top 10” tier list. That will be on another day. This list is aimed at helping those at lower MMR to climb the ranks. This list is just my opinion and is not to be taken as fact.

For Changes to the jungle this patch check out my “Jungle Notes.”

Reasoning: Both of these champions do amazingly well in bronze-gold. Amumu falls off some in Platinum+ games, but he is still a good pick. They both have a weak early game, but they more than make up for that in the mid-late game. They both have percent health shred, lots of CC, initiate, and solid team fights.

Reasoning: All of these champions are great picks and have something to offer the team. For those who enjoy being a frontline tank try Nautilus, Volibear, and Sion. All three of them scale well with health and can soak up a lot of damage. Rek’sai, Vi, Xin Zhao, and Fizz are all great at diving a target and splitting the team. Nunu is amazing at running interference, buffing the team, and securing objectives. Nidalee is just an all-around terror. She does well at poking, executing, healing/attack speed buffing, and kiting.

Reasoning: This is where the bulk of junglers will fall. There are many different play styles  to offer here. Your choice all depends on how you like to play. There are a number of great tanks to choose from, such as Gragas, Cho’gath, Zac, Maokai, etc. Split-pushers do rather well in lower tiered games, such as Rengar and Yi.

*Lee Sin – Please, put down the pitchforks people. He is placed here due to the fact that he requires a rather high level of skill to pull off properly and he falls off as the game goes on. In the right hands he’s insane.

Tier 3: Viable / Require a certain level of proficiency to pull off

Reasoning: These champions are all viable, but not anyone can just pick them up and do well with them. They are typically laners that people have a feel for and try out in the jungle. Riven is a good snowball carry jungler that can be hard to deal with once fed.

Tier 4: Can work, but typically won’t do well or require lots of gold

Reasoning: Any champion can jungle, literally. This is where some of the “niche” and “fun” junglers go. I like rocking the jungle Ashe from time to time, but she takes some practice and strong invaders will make short work of you.

Recommended Jungler for newer Junglers: Warwick – He is easy to pick up and can jungle practically naked. You can quickly pick up on his kit and he has no skillshots. He fits well into most team comps and his W is amazing for boosting ADC and team attack speed. Also, his R can be used to jump skill shots.

There are many junglers to choose from this patch. Don’t bottleneck yourself into thinking that there are only a couple of “good” ones. There are no guides or streams that can turn you from a bronze/silver/gold tier player into a challenger tier player overnight. Climbing the ranks takes time, skill, dedication, and a bit of luck. Admit your mistakes and improve from them and you will go far. None of us are perfect, why act as such?

TL;DR – There are many viable champions atm. Don’t feel confined to playing one champion because he/she is the flavor of the month or because the pros are playing him/her. Play what you feel will do well. Learn from your mistakes and improve your play and with time, you will advance. Take care.