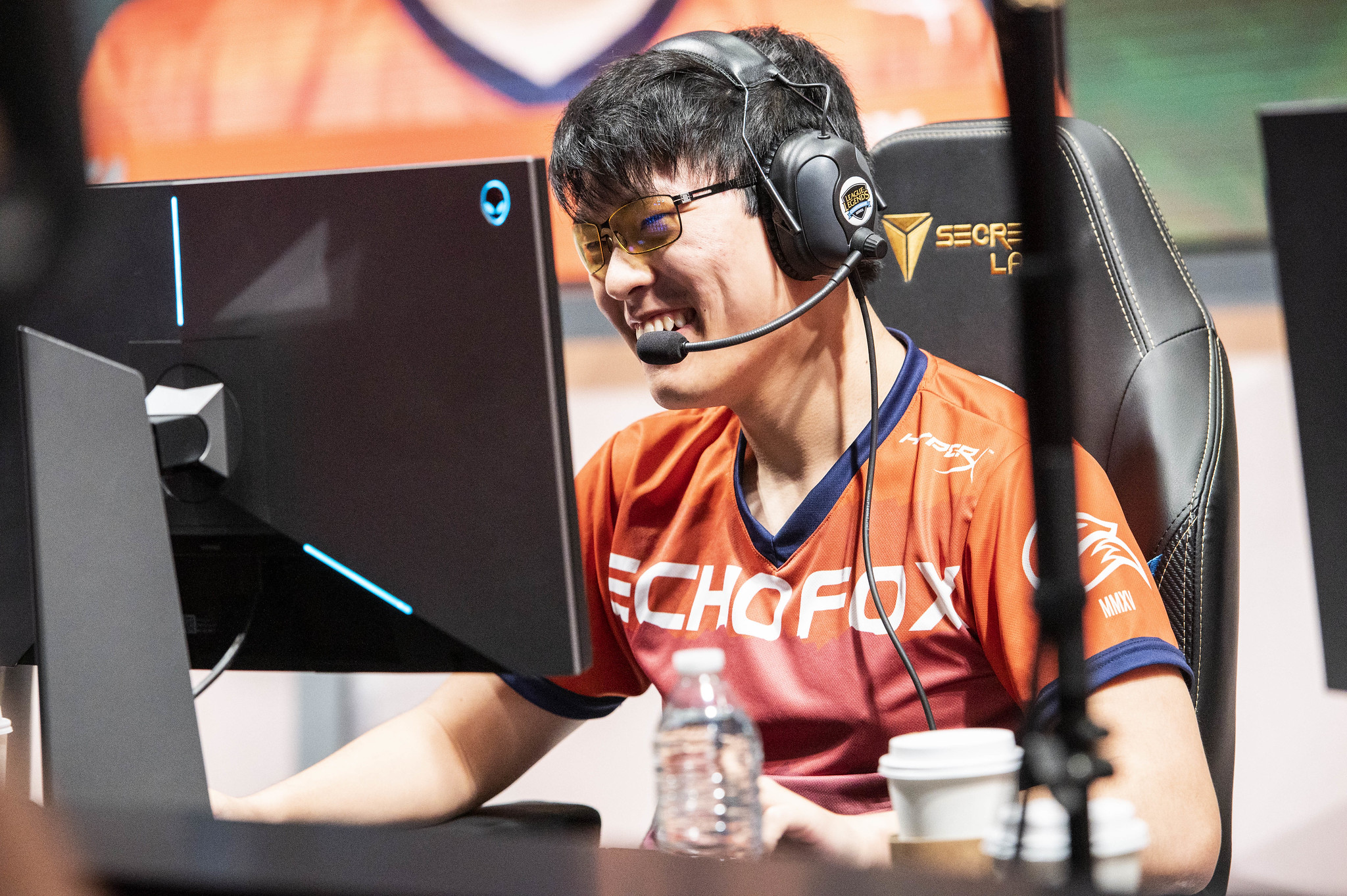 When Mike Yeung joined Echo Fox on June 30, the team was sitting in 10th place with two wins to their name. It was pretty clear Echo Fox was bringing him on to bolster the team and right the ship. But for MikeYeung, the idea of being a catalyst for the team came with a dose of stress.

MikeYeung’s last performance on the LCS stage had been with TSM during the 2018 Spring Split. Since then, he played on the TSM and Team Liquid academy rosters. He has a level of experience that should help Echo Fox, but of course, a team in sole possession of last place has issues that can’t be solved by just one person. Echo Fox didn’t have a strong shot caller, MikeYeung said, and struggled with objective control.

“They needed someone that mainly focused on objective control and I felt like I was able to do that very well,” MikeYeung said. “As soon as I joined the team in scrims our Dragon percentage plus Baron/tower percentage just went up. And our win rate the first week [in scrims] was like over 80 percent too against middle of the pack [and] upper teams.”

MikeYeung’s ability to control objectives and his leadership capabilities weren’t developed by his efforts alone. He attributes a portion of his progress from his time spent on Liquid and learning from their laners.

“The main thing that I learned on Team Liquid was a lot of basic macro [play] and [how to play] with the laners as a jungler,” MikeYeung said. “I learned a lot about shot calling from Core and Xmithie when I went with them to MSI and also just watching top-level teams. So you know, I’m just going to try and transition my shot calling into Echo Fox.”

While MikeYeung is bringing his improved in-game knowledge to Echo Fox from Liquid, he’ll be taking crucial elements of self-care he learned from playing on TSM, where he had little time to do anything but focus on the game.

“I’m going to be taking learning experiences from TSM that deal with having a better work-life balance because back then I wasn’t that great at doing all that,” MikeYeung said. “When I was [on] TSM for the Spring Split, it was just like all work and nothing. I didn’t have time to really recover from the pressure. The losses.”

Large portions of his day weren’t even spent playing the game, he said, but rather watching and reviewing.

“I think some weeks I would watch over like 10 vods a day,” MikeYeung said. “I didn’t really think about caring about my mental health and I didn’t manage my burnout at all.”

Since his time on TSM, however, MikeYeung’s work-life balance swung the other way. Instead of reviewing VODs at every point in the day, he was scrolling through the internet and social media. One week after returning to the LCS, he decided he needed to take a break from that as well.

After a week of dropping social media, MikeYeung came in refreshed. And in week six, Echo Fox defeated the current second-place team, Cloud9. It appears his decision was for the best, but leaving his online presence behind didn’t come easily.

“I really enjoy reading the fans’ comments and stuff,” MikeYeung said. “So it was kind of hard at the start.”

As MikeYeung continues balancing his free time, he only has a few weeks to make his return to LCS impactful. While bringing on MikeYeung is an opportunity to clear up some of Echo Fox’s weaknesses, for the jungler, a starting spot on the team is the chance to re-establish himself in the LCS and demonstrate his capability as a star player.

Before the season is over, he wants to show everyone that his place in League of Legends esports is on stage competing in the LCS. He’s come far since his first time on stage with Phoenix1, taking experiences from each and every team he’s been a part of. But he believes there’s still more for him to learn.

“My personal goal is just to prove that I’m a top jungler in LCS and I belong here,” MikeYeung said. “Another thing is transitioning my scrim playstyle to stage because I’m definitely playing a lot differently on stage and I feel like in scrims I’m a lot more confident and I’m able to take control of the game, but when I get on stage, some of that intuition goes away.”

Since he joined Echo Fox, they’ve gone 1-5 and remain the sole owners of 10th place. The chances that they can reach the playoffs are becoming increasingly slim. But at this point, the goal for both MikeYeung and Echo Fox is more humble: to simply keep improving.