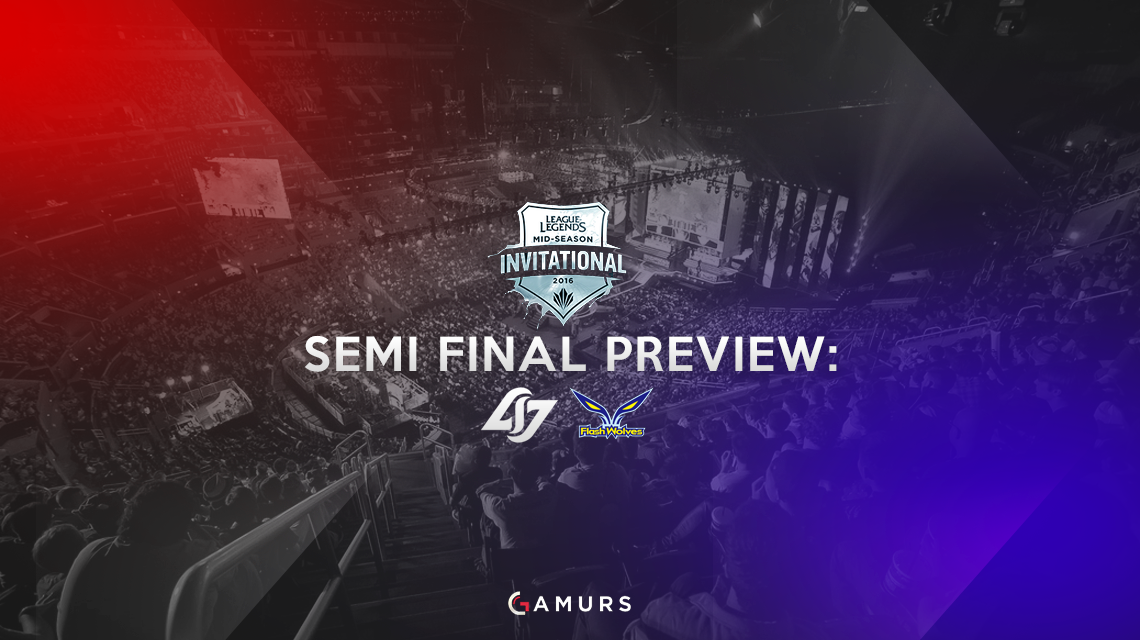 The second semi-final match of the Mid-Season Invitational (MSI) as between the upstarts of North America, Counter Logic Gaming and the faltering giants of Taiwan, Flash Wolves.

Honestly, even as a North American fanboy, I didn’t expect CLG to make it this far. Flash Wolves, however, I correctly placed in third before the tournament started, but their run of form near the end of the group stage was far from impressive.

A North American team has never made it into the finals of a major Riot tournament and a Taiwanese team has not pulled off the feat since 2012. One of these stats will be different after this semifinal match.

North America’s darling child, staving off the star-powered lineups of Team SoloMid and Immortals to represent NA at MSI, this Counter Logic Gaming is a legitimate world threat.

Going into the NA LCS playoffs, I didn’t have CLG taking the win. Thier lineup just didn’t seem to have enough star potential, but they held their own and took down the best that NA had to offer. Going into MSI, the world expected a typical NA crash and burn. It didn’t happen.

These CLG players have faced off against the best teams in the world and proved that NA is a laughing stock no more. I should be staying unbiased as a journalist I know, but I’m proud of what they have done. They have truly made NA great again. But enough with the random praising, time to really talk about this team.

In the group stage, CLG only lost three matches. One was a total upset loss against the Turkish SuperMassive squad, but the other two losses were against Royal Never Give Up and SK Telecom T1. The loss against SuperMassive was unsightly, as CLG was even picked to win that game before their impressive tournament showing, but losing to RNG and SKT is nothing to be ashamed of. Aside from those losses, CLG played this tournament nearly to perfection. Let’s not forget, this team also defeated RNG and SKT once each, and defeated Flash Wolves in both matches against the squad.

The surprising factor that has carried CLG through MSI? Stixxay, the American ace. The rookie came in as one of the best marksmen in North America, but currently stands as arguably the best marksman in the world. The only non-RNG player elected to the All Tournament Team for the group stage, Stixxay has dominated every world-class team he has come up against, and will likely continue to be the key to this team’s success.

Though he has been spotted by most people as CLG’s weakest link, Huhi’s performance in the mid lane at MSI has been admirable. The mid lane is the most stacked position at MSI and Huhi has held his own against the best of the best. I won’t go in-depth, but check out Ryan Tang’s article about how Huhi is the key to CLG’s overall success.

If the North Americans keep playing how they’ve been playing, we’ll be seeing them in the finals.

While CLG largely relied on teamwork, and some amazing play from Stixxay, to get this far, Maple is the star of Flash Wolves.

The young mid laner has proven himself to be a god and put himself in the conversation regarding the world’s best player. Everyone here knows Lee “Faker” Sang-hyeok, the best mid laner in the world, a god among men, etc. Well, Maple and his team bested Faker not once, but twice. In case you were wondering, that doesn’t happen often, if ever.

Maple’s expert map control is far beyond his years in the competitive field, which allowed his team to take a few matches that would have been otherwise much more difficult to win. This Flash Wolves team is relatively sound, only suffering four losses in the group stage against RNG and CLG. Too bad for them, CLG is their opponent.

This isn’t meant to be an insult to Flash Wolves. This team could absolutely turn around and 3-0 CLG in this best-of-five and I wouldn’t even be that surprised. Right now though, at this very moment, they just don’t seem strong enough to pull out the win. NL’s inconsistent play is a dealbreaker, especially against Stixxay’s godlike performances thus far.

Who do you think takes this semi-final match? Let us know in the comments below or on our Twitter@GAMURScom and be sure to follow us to stay up-to-date on all of your eSports needs.