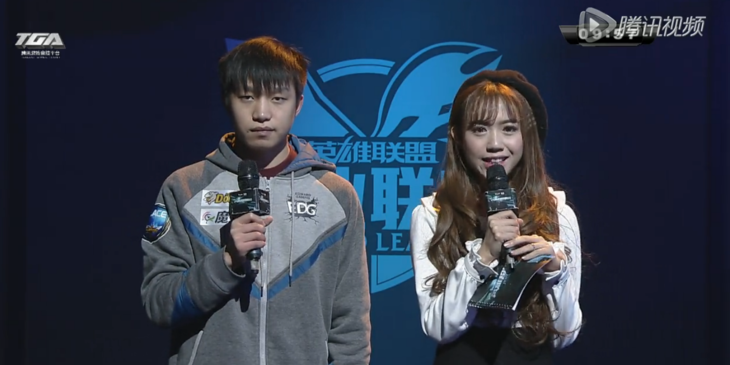 Welcome back everybody~ today we’ll be interviewing EDG’s “Promise” (Clearlove). Say hi to everyone!

This is the first time I’m interviewing you this LPL season!

Clearlove: Ah, it is.

I feel like EDG’s performance this year has been really excellent. Right now, your record is something like 6-1. You’ve just lost one game to Snake. Are you satisfied with your team?

Now let me ask you about that game you lost to Snake last time.. when you lost, did you feel a bit gloomy?

Clearlove: Not really. When we played Snake at the time, I didn’t feel like we prepared well beforehand. Because that week, our Korean players had to head back and take care of their visas, so we only practiced–

You didn’t have enough time to practice, right?

But I feel like as a whole, you guys have been performing pretty well. Also, Clearlove, as a jungler in the LPL, has been performing well on his own individually. I also feel like you really like to use Nunu. Why is that?

Clearlove: Because this type of champion for a jungler is not often banned, and because I feel like Nunu is a champion that fits my play-style, I like picking him.

Do you play him a lot secretly during practice and scrims?

Clearlove: No, I don’t play him secretly during scrims. Because this champion is really boring to play.

But you don’t have a choice in these real competitions. You have to pick these types of stable champions. From what I can see, Clearlove is a very consistent jungler–the type of jungler that can let his teammates relax. You can play your opposing jungler while also playing against other players. From these two games, it was pretty apparent that your ganks were efficient.

Clearlove: Well, I think that the jungler has to have a very steady mind. Because if his mentality collapses, then the rest of the lanes will have immense pressure put on them. So that’s why I try to be more consistent.

The jungler is a very important position, as we can see. So let’s give your team a rating. Out of 100%?

Clearlove: I think 70%. Because during scrims, there are a lot of things we don’t do correctly.

Clearlove: Hm… it’s probably our communication and a few details that we haven’t ironed out.

Ah, I see. You still have to work hard and forge ahead. Including today, you’re on a 6 win-streak. And today, you’ve gotten another full 6 points, so that means you’re currently placed number one in the standings – that’s really great! Last year, EDG was able to monopolize the standings during the Spring and Summer seasons too. The pressure must be intense for your teammates.

I feel like this is a really good mentality. Even though you’re already a two-time championship winner, you still maintain a very ordinary outlook. So we were talking about your two Korean players. Individually, they’re already pretty strong. Usually, when you add a new player, there are problems with communication and synergy. What do you think about your synergy right now?

Clearlove: Like I said before, we’re around 70%. It’s still pretty good.

I hope that your journey is filled with more victories down the line.