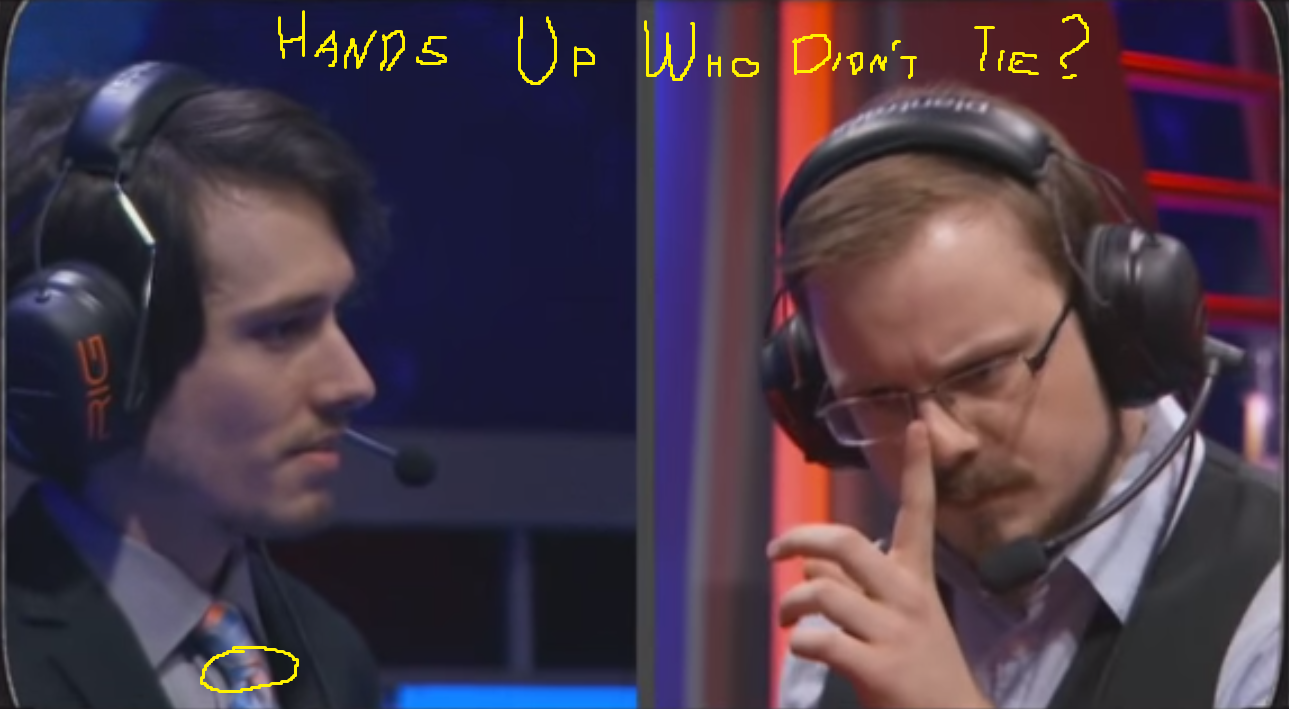 Welcome back for our Semifinal review and Finals weekend preview! We’re at the pointy end of the season which means that coaches should be deploying their best ties to inspire their troops to victory! Let’s see who managed that!

We had a couple of DQ wins here, which really wasn’t much of a surprise. Let’s see what we did encounter:

We got the inside word that LeDuck was not going to tie, and he was true to that word. Even if not this one so far. But there’s still time!

I mean, he was up against pr0lly, so he was always going to lose. Which he did. Let’s hope he was just saving himself for this week. Slightly off-standard performance by pr0lly but he didn’t really need it. Even if he didn’t read the tweet, it was as safe as houses to bet that he wouldn’t tie.

Unicorns of Love vs Fnatic

Sheepy has realised that by adding one (and only one) tie to his wardrobe, you can pick up countless wins in tie battles. And UoL needed to take *something* out of this because…ohboy. Wasn’t much leaguing to be happy with. But his victory over Deilor was equally convincing. And this is among the best we’ve seen Sheepy wear this tie. Really like the square theme of his knot and tie.

WINNER: Sheepy of the Unicorns of Love

Another unsurprising win over an equally unsurprising DQ for the TiP coach. Loved that Zikz is branching out into some more vibrant colours and really hitting his style points too. We always said he was a baller.

Well, this one has us torn. It was almost a case of who made the fewest mistakes. Peter has a noticeable tie/collar gap and what’s more you can see the loop on his right side. Locodoco makes two cardinal sins of wearing a skinny tie and not tucking in his shirt (Vintage Loco, but vintage making us cry) but those two aside it’s decent execution of a bad tie. In the end, in what’s become a typical TSM/TL throw-fest, we have awarded the win to Peter for the style points of what is a delightful purple number.

So long as pr0lly doesn’t throw, he should account for the one-trick pony/one-tie Sheepy. We admire Sheepy’s dedication to tie-ing, but realistically he just shouldn’t be beating someone of the calibre of pr0lly. Mind you, that’s an accurate statement regarding the LCS history of UoL and they’ve spent it proving people wrong, so maybe they’ll surprise us! It’ll be quite the surprise though.

Deilor tied in the finals after not doing so all Spring split. LeDuck has never tied yet. Overall history suggests a double-DQ, big game history suggests a Deilor win by default, and the power of love, friendship and Capital F Faith makes us think we’re going to get a tie battle for the AGES here. Hey, as the saying goes, if you can’t believe in ties, why are you even here? So we’ll put our trust in Deilor. Don’t let us down!

We’re backing Zikz here. Locodoco may not tie at all, he may skinny tie again, or he may surprise us. Zikz has really emerged as arguably the #2 in the region behind Cop though, and with no more Cop on stage, the smart money has to be on Zikz.

We’ll be back next week to recap the finals and hopefully the split as a whole. Thanks to the lolesports stream for the screencaps used to make the reviews. Until then!