League’s Patch 9.16 is another swing and miss

Getting Pantheon back is great, but the rest of the patch is pretty lame. 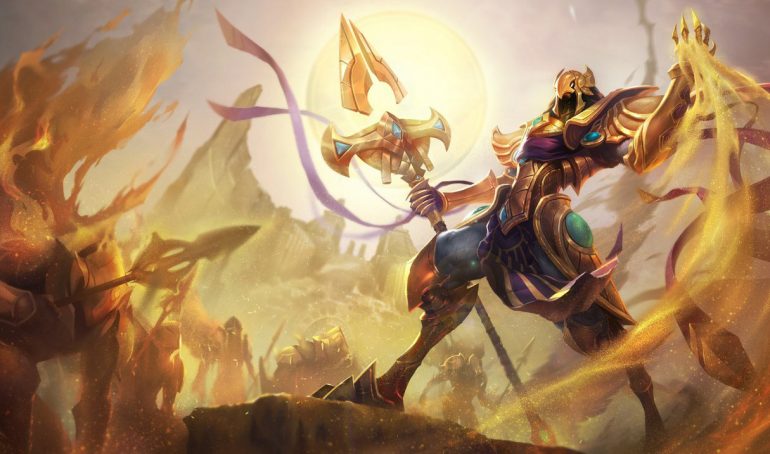 A few weeks ago, we wrote about how boring the League of Legends meta had become. At the professional level, games have revolved around the same core champions for months.

Judging from the Patch 9.16 notes, it doesn’t look like any of that is going to change. Riot continues to focus on nerfing overly safe champions like Azir, Corki, and Sejuani rather than actually giving players meaningful counterplay options.

The result is that we might see more champions in the mix. Mid lane Tristana is interesting and Syndra threatens to bring back more mages. But the overall theme of stalling things out, clearing waves safely, and waiting for the late game will remain.

To be clear, we aren’t advocating for champions like Azir to be nerfed into the ground. It’s fun seeing a really good Azir land a clutch ultimate to win his team a fight. The problem is that Azir has been so safe that some mid laners who aren’t actually that good at Azir are picking him anyway. And their teams just go along with it even though some don’t really have an idea of how to draft or play around the champion.

So forgive us if we think the massive, game-changing two-second cooldown nerf to his max-rank Q doesn’t actually accomplish much. Does Riot Games even understand why people play this champion?

The good news is that the Corki nerf is actually pretty big for his early game. The bad news is that nerfs to two other ADCs, Ezreal and Sivir, meant absolutely nothing. Ezreal’s so good and has such diverse builds that nerfing his AP ratios shouldn’t limit him. And the damage nerf to Sivir’s W doesn’t do anything at all.

The Yuumi nerfs are nice and necessary, but then there’s Tahm Kench. Riot has thrown the book at him and pros still play him. The Tahm Kench and Ezreal bot lane is especially gross. At this point, it looks like the only way to balance the River King is just to kill him off entirely.

Where are the buffs?

So the nerfs are bad, but what about the buffs? Some of them are quite nice. Fiora and Jax will add to diversity in the top lane in the right matchups. Top lane has had one of the more interesting metas all season.

But slight buffs to things like Sion and Nocturne aren’t going to do anything at all. The jungle meta is devolving into Sejuani-or-bust and nothing is being done about it.

And it’s not like Sejuani actually needs to be nerfed. Teams are picking her because they don’t see viable options. Even slight buffs to more aggressive champions that can fight her in her clear would help teams think harder about jungle. Nocturne buffs, though, aren’t the right solution.

Then there are the buffs that are downright scary. Really good Ekko players will enjoy the 10 extra damage on his E, but most mid laners probably won’t find an excuse to play him. This is basically a Vitality buff given Daniele “Jiizuke” di Mauro’s proficiency on the champion.

But there are a few other mids that did get sizable power increases. Kassadin will hurt a lot more and might fulfill the fantasy of a late game Azir counter. LeBlanc will be able to deal more damage on her Q as she builds AP items.

And then there’s the sizeable buff to Syndra. This is the type of buff that’s healthy for the meta. She can be played into Azir but isn’t so overtuned that she’s automatically picked. That’s a good thing, right?

Only if you really like Syndra. This is setting up to be the fourth-straight year that Syndra has high priority at Worlds. Patch 9.16 shows that the more League of Legends changes, the more it stays the same.