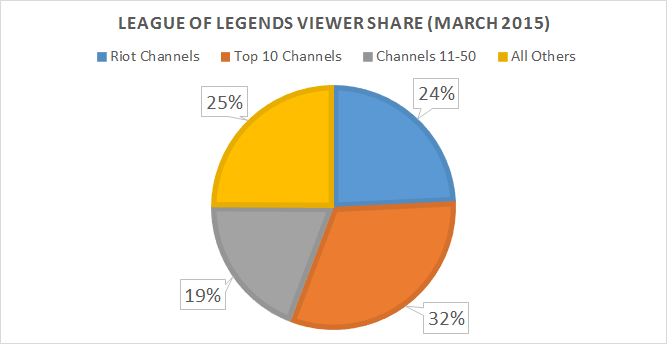 League fans combined to watch 91.8 million hours of content in March 2015, up 9.6% from February. While the aggregate total is higher, the average daily viewership was down 1%. This may have been caused by the week surrounding IEM Katowice, when four days of LCS play was replaced with three days of play at the ESL-run tournament. Alternatively, more people may be playing the game because of the great buff barges of 2015. Perhaps there are more Urgot mains than we realized.

Viewership shares didn’t change significantly in March, with the exception of the top 10 non-Riot streams taking a chunk away from first party content. However, the vast majority of that difference was ESL’s stream during IEM Katowice.

Bjergsen maintained the number one spot for the fourth month in a row. Imaqtpie held steady at the number two spot, but raised his average viewer count 7% over his already high numbers in February. Sodapoppin popped in to stream 10 hours of League and brought his substantial viewer base with him to take the third spot this month.

Turtle also made huge gains, as his average viewer count has increased 71% since January. Last but not least among those posting major gains was Aphromoo, who leaped from 6.8k to 15.3k average viewers. His numbers were increasing in general, but turned sharply upward in the wake of CLG’s ranked fives.

Qtpie is the first person to unseat the Bjerger King from his throne, setting a new high since I began tracking these numbers in December.

Aphromoo went from not ranking on the chart to number four thanks to the late night shenanigans with the rest of his team, and Sky rocketed to number nine after gaining attention following his complaints about some female streamers.

Qtpie continues to lock down the number one spot for total viewer hours, surpassing 6 million viewer hours for the first time and more than doubling the next closest streamer.

Nightblue3 and Trick2g swapped spots at two and three, while Wingsofdeath and Brazilian broadcaster yeeTz joined the list as mainstays like Doublelift, Dyrus, and WildTurtle fell off the list due to less time spent broadcasting.

If you’d like to find out where you or someone else landed on the charts, you can view full rankings on these Google Docs:

If the thought of downloading 3 GB of CSV files makes you giddy, you should follow me on Twitter where I’ll post the raw data later this week.

Next month, we’ll see what happens to League viewership when Riot switches to the playoff LCS schedule, and we’ll look more of Twitch’s rising stars. Until then, help control the ward population by always upgrading your trinket.