The League of Legends community is filled with talented fans who enjoy showing their respect for the game with their masterful artwork and cosplay. While fan art is a great way to bring the community together and give ideas to Riot Games for future skin releases, cosplaying allows League champions to become a part of our lives, even for a brief moment.

Every summer, ideas for Pool Party skins start floating around. This year, League players have been exceptionally vocal about a Pool Party Sett concept—and one fan decided to take the idea out for a spin at a nearby beach. 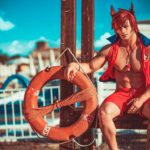 Taryn Cosplay, a professional cosplayer from Italy, posted his cosplay of Pool Party Sett earlier today. This isn’t Taryn Cosplay’s first time featuring as Sett the Boss, however. The cosplayer also dressed up as the original version of the champion at the beginning of May and was showered with the League community’s love.

His take requires almost no introduction since even his hair game is on point. Some fans also believe that Taryn Cosplay could either be Sett’s real-life incarnation or Riot may have modeled the popular champion after him.

The photoshoot also includes an excellent cover pose, if the skin becomes a reality, with a drink in his hand.

Though this year’s set of Pool Party skins already hit the live servers at the beginning of July, Sett could undoubtedly be a strong candidate for next year’s additions to the skin line.

A quick look at Taryn Cosplay’s Instagram and Twitter accounts show that he’s found ways to cosplay as multiple characters —and there are certainly more champions in League that he could masterfully represent.