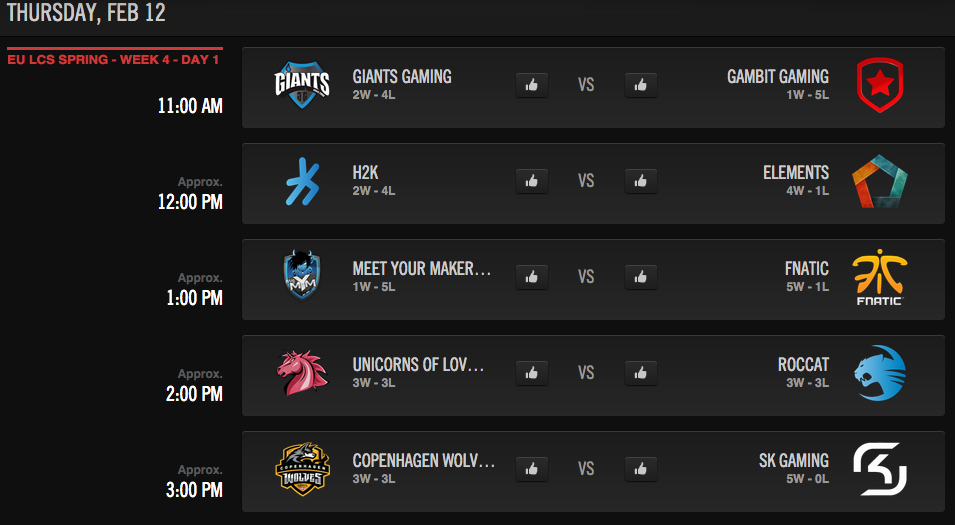 Last week was not without its upsets (UoL vs. Fnatic, CW vs. UoL, Dig vs. Liquid), but outside these three the week was fairly predictable. Likewise, outside a couple high-profile matches, this week should be pretty low-key as well. It’s the calm before the week 5 storm when the top teams in both regions begin clashing again. That being said, this week, you should definitely tune in for:

Unicorns of Love vs. Roccat – Thursday at 2pm (CST)
Roccat seems set to continue their upswing through the rankings after their unenviable week 1 and 2 schedule. Meanwhile, last week UoL was the first team to take a game off Fnatic, but then turned around and lost to Copenhagen Wolves. UoL looked shaky in both of their games, losing the early game versus Fnatic, however, they came together for some truly beautiful teamfights to win the match. I’m still not entirely sure what happened in that late game against Copenhagen Wolves though, their shot-calling just seemed to fall apart as the game went on and they made increasingly risky plays. By contrast, Roccat had a dominant week against MYM and Giants Gaming. They appear to be playing better together, with Nukeduck finally growing into his role on the team. However, coasting to two easy wins versus bottom tier LCS teams may have left them a little too relaxed as they head into this week’s game vs. UoL. Based purely on the stats they’re put up, both of these teams seem really evenly matched. However, I have to give the edge to Roccat, I think Nukeduck/Jankos are simply stronger than PowerofEvil/Kikis. UoL usually depends on their mid-laner to lead them to victory, and against Nukeduck, he’ll meet his match. With that matchup in mind, Roccat will probably dominate the laning phase. Additionally, with a wider breadth of strategy and better strategic play than Fnatic, I doubt they’ll throw the late game in a similarly spectacular fashion and allow UoL to redeem a victory.
On a final note, I’m going to be curious to see how CW perform this week after going 2-0 last week. I expect them to drop both games (to SK and Fnatic), but an upset, especially against Fnatic, would not be outside the realm of possibility. If they can pull together like they did last week, we might see them become one of the stronger European teams going into the second half of the Spring Split. Seeing them play against their former ADC in their game against SK should be interesting as well.

There’s only one game my pick could be.
Counter-Logic Gaming vs. Team Solomid – Sunday at 4pm (CST)
It’s going to be Throwback Thursday on Sunday this weekend in the latest incarnation of a classic NA matchup. And with CLG looking great over the past couple weeks, this is a tough match to call. I think this match comes down to one factor: how badly does Link lose lane to Bjergsen? I have no doubt that lane swap or not, Doublelift and Aphromoo are going to dominate their lane. I expect to see Morgana and Blitz denied to Aphromoo, just to prevent CLG’s duo lane from killing Dyrus repeatedly in a potential lane swap. If the matchup ends up being standard lanes, Doublelift should smash Wildturtle, especially if he grabs Sivir. However, CLG has to contend with a mechanically incredible mid-laner and a jungler who will repeatedly gank for Bejrgsen to get him ahead. Link needs to play a passive, safe laner, and try not to get smashed so CLG’s side lanes have time to get ahead and carry. If Bjergsen comes into the mid-game with a 3-0 Leblanc who can one-shot Doublelift, it’s going to be as good as over.
TSM generally has a better laning phase and snowballs advantages off of that, while CLG has displayed exquisite strategic play over the last couple weeks. If CLG gets to 20 minutes without being at a significant gold deficit and without Bjergsen being too fed, I expect them to win. If not, TSM will probably coast to an easy victory. Either way, it should be a great match to watch.