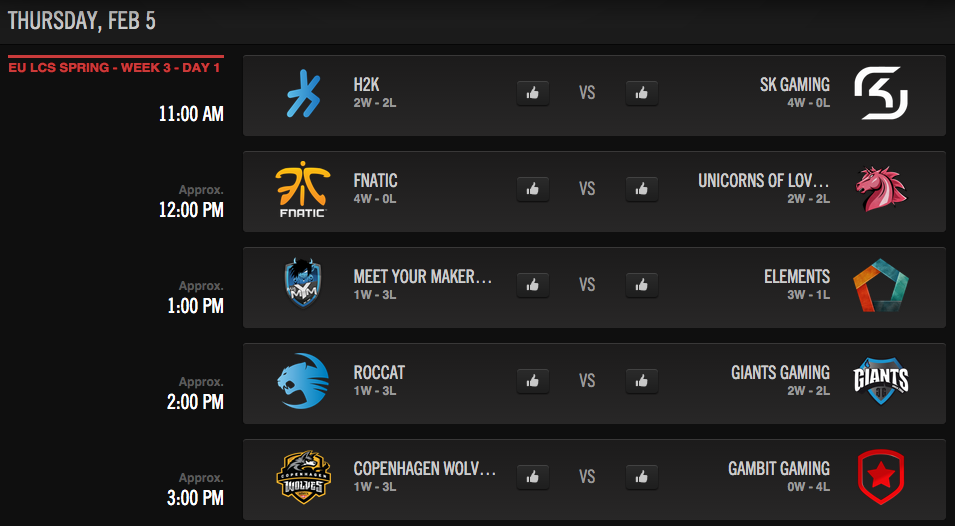 After a week of high intensity games, this game promises to be a little more low key on both sides of the Atlantic. The majority of games this week feature match-ups with more noticeable skill gaps than the standings at this point might indicate. With that in mind, I’ll personally be watching more to see a couple story lines hopefully come to fruition than watching specific high octane match-ups. However, there is one stand out game I have to mention.

For your listening pleasure while reading, the best of DJ Sona’s three songs: Concussive

This match stands head on shoulders above the rest in terms of the overall skill matchup, two of the top three teams in Europe finally going to head to head after both having a promising start to the split. I’m particularly psyched to see Forgiven and Rekkles play, and I honestly don’t know who is better, although Forgiven seems confident. But if any team is likely to end Forgiven’s deathless streak in EU LCS, it’s going to be Elements. As for the rest of the team, Fox has to be nervous going head to head against Froggen. However, given what I’ve seen from him so far, I feel he’ll be up for the challenge, and while he probably won’t win lane, he probably will not get stomped either. The potentially really problematic matchup for Elements is going to be their top lane, where an underperforming Wickd is going against arguably the best top laner in Europe, Freddy122. With this in mind, I give a slight edge to SK in this game, they’ve been more consistently dominant in their matches so far and I think they enjoy a slight edge in the bot lane and a potentially big one in the top lane. Regardless, it should be a firecracker of a game.

What I’ll be watching equally closely this week in EU, however, are Fnatic, Roccat, and Gambit’s games. I expect Roccat to start living up to everyone’s expectations and win in their match-ups vs. Giants and MYM. Gambit also could feasibly pull it together this week, with lower key games versus CW and H2K. Meanwhile, UoL stand the best chance to date of any team being able to stop the surging Fnatic, and their match should be a close one.

This was…..hard…..there honestly just isn’t a whole lot of intrigue in this week’s NA match-ups. The two story lines I’m most curious to see play out are CLG’s newfound strategic prowess and the continuation of Gravity’s surprising win streak. So logically, you say, I should be interested in their match versus each other on Sunday. However, the only way I see Gravity having a chance to win is if CLG underperforms massively. With that one ruled out, the most interesting match is probably going to be:

This is Gravity’s chance to effectively secure a spot among the top five NA LCS teams. Meanwhile, with their other game this week against a dominant looking TSM, it’s an opportunity for Team Impulse to get a much needed win and remain in near the middle of the bracket. Its hard to talk about this match though, because with their rotating cast of players over the first couple weeks, I still don’t have a good feeling for how Team Impulse play as a team. Their games have generally resembled solo-queue without as much objective based play as we saw from the old LMQ. The matchup to talk about here is XiaoWeiXiao versus Keane. Both these mid-laners have massive skill ceilings and have delivered some very memorable plays, but both have been not performing quite to expectations so far this split. The other matchup to watch will be Gravity’s Hauntzer against F5’s Rhux, who is subbing in for TIP this week. Hauntzer has been looking extremely good over the first couple weeks of competitive play, and stopping him from snowballing a lead out of top lane will have to be central to a Team Impulse win. While both Rhux and Hauntzer played in the Expansion Tournament, due to how the bracket worked out they never got to play each other – a match-up I would have loved to see. Now, a couple months later, they finally have their chance. Overall, this match is hard to call as well, but I would probably give a slight edge to Gravity based purely on the fact that they have a stable, permanent roster at this point and have been winning through stellar team play, something that has been a bit lacking overall in TIP’s games to date.