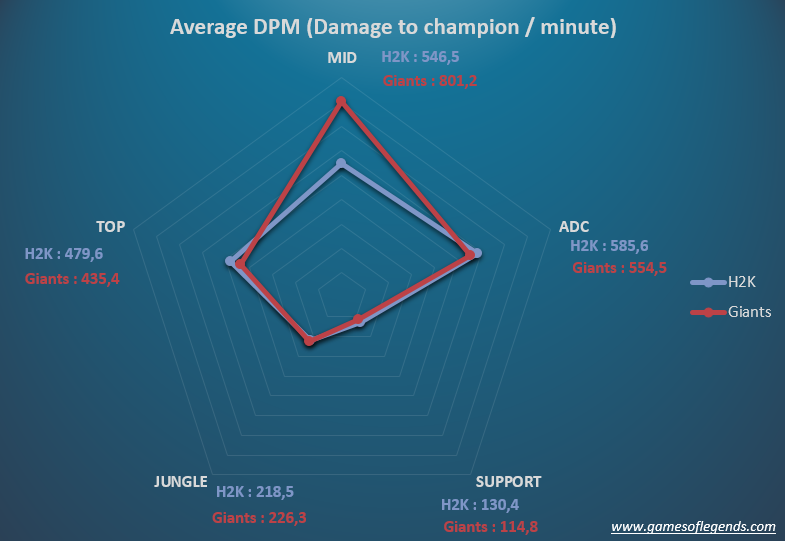 With the Playoffs starting this week, I feel like it’s the right time to review the teams’ stats of this Summer Split.

Page 3 : Unicorns of Love vs Roccat

Giants Gaming playstyle mainly turns around PePiiNeRo. During Summer Split, PePiiNeRo played poke champions (Varus, Ezreal, KogMaw, Xerath or Jayce) in 12/19 games. He had a 58.3% winrate on these champions whereas he only won 1 game on other champions (with Diana).

H2K Gaming won the 2 games against Giants during the Summer Split.

Both teams have a low/average farming rate, Giants being slighty higher (considering the winrate difference, it can be a thing).

In term of vision control, Giants are at the bottom of EU LCS (lowest wards/minute tied with Copenhagen Wolves). H2K is not that far ahead, at the 7th position.

The score between the two teams during Summer Split was 1-1.

We can see a strong nashor control from TiP, securing 73.7% of them.

TiP is the best farming team of the split. Mainly because of XWX : being the 2nd best farmer of NA behind Altec. With his replacement by Gate, TiP’s farming may be lower.

We can notice a bad warding for Dignitas (rank 9th of NA LCS).

Unicorns of Love vs Roccat

UoL and Roccat have a similar damage profile. ADC’s damage for UoL being lower (the lowest of EU LCS in fact).

Both teams’ stats are really close too, and they went 1-1 during their Summer Split matches.

The long game duration for roccat may benefit UoL who like playing champions with Tear of the Goddess.

The picks & bans may be difficult for TSM against Gravity’s champion pool (10 unique champions for Keane and Move), on the other hand Altec played 10/19 games on Sivir (with a 60% winrate).

Biggest difference come from Nashor control, in favor of Gravity.