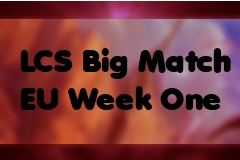 Day One: UoL vs Fnatic

Riot knows what they’re doing schedule wise. Setting up the split finalists to open each split has consistently made the first week entertaining, and this split looks to be no different.

How could you not be excited to see a rematch after how close their series was? Fnatic are coming off an impressive performance at the Mid Season Invitational, and have reunited the world caliber bot lane duo of Rekkles and Yellowstar. While Rekkless has show that some team dynamics don’t suit him after a disappointing split with Alliance, he should thrive once more with the super competent support and, more importantly, Febiven’s aggressive mid lane style. Fnatic now have three carry lanes, and arguably the best jungler in Europe in Reignover.

On the other side we get the Unicorns, who had an insane performance in the spring playoffs. Kikis proved supremely entertaining with his Udyr and Shaco picks, and though they didn’t work out finals, proved once again that you can’t predict UoL. Consistency is the big thing to look for with the Unicorns in the summer split. Can they learn from their mistakes and win with the lower preparation time of the regular split?

In this match up, the bot lane will be the one to watch. Can Vardags and Hylissang keep up with Rekkles and Yellowstar? It would take an impressive performance.

Origen strikes me as the Expendables of the LCS. Maybe not quite so star packed, but close. With three seasoned vets on the team it’s hard to imagine them too poorly even in their first split, with their bot lane already showing promise. Their run through the challenger series was good, but they didn’t show a very deep sense of strategy, relying on their superior individual prowess.

What makes this matchup so interesting is H2K, who have been red hot despite not having a real superstar on the team. Ryu is somewhat back to his old self but really H2K is a team first, which makes them easy to be fan of. Their team atmosphere seems fantastic, and with their coach Prolly they’ve done exceedingly well.

This match comes down to whether the individual skill of Origen can overcome the excellent objective control of H2K. xPeke may not find himself able to run quite so rampant on Ryu, and without an early lead the team fighting synergy of H2K may be too much for the vets this early in the split. On the other hand if they surprise and show another gear, Origen will be a contender this split.