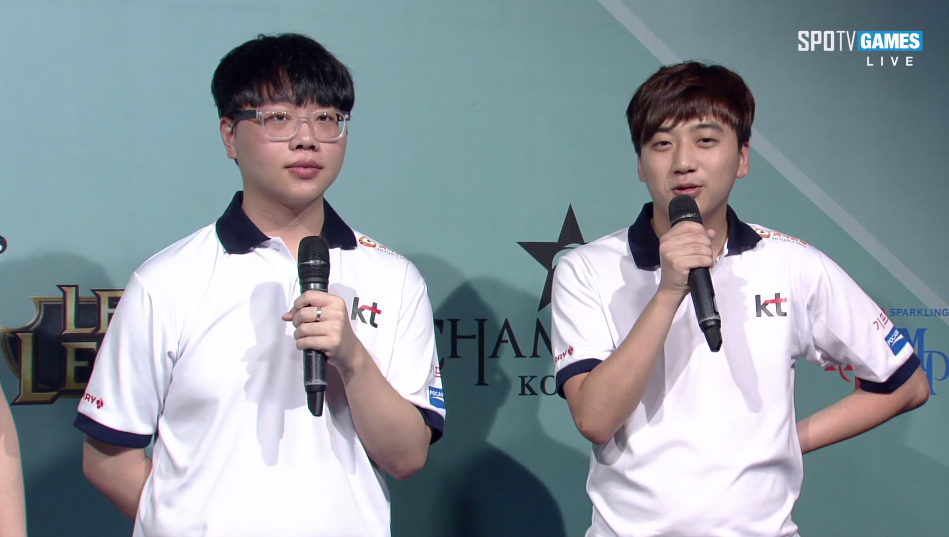 KT Rolster took down the Afreeca Freecs earlier today to push into a three-way tie for first place in the LCK alongside Samsung Galaxy and Longzhu Gaming.

With less than three weeks left in the Summer Split regular season, KT Rolster knew that they couldn’t afford any more losses. In order to secure sole possession of first place, a position that instantly qualifies you for the LCK finals, KT needed to win tonight’s match to catch up to both Longzhu and Samsung.

And with his lead, Smeb helped KT take over the map. Through the added global presence of Smeb’s Shen, KT could win early skirmishes, which in turn snowballed into a major lead. All it took was one teamfight win for KT to take the Baron to close out their lead.

Game two saw KT go for a risky tank heavy composition with Galio and Gragas. And while they managed to do well early, as the game progressed, KT began to do less and less damage to Afreeca. KT had no real way of getting into Afreeca’s backline, and Afreeca abused this, pushing for teamfights.

But despite this problem, KT were still extremely tanky and could defend their base fairly well. Afreeca needed to wield both the Baron and Elder Drake buffs simultaneously before they could end.

Back on the blue side for game three, KT resorted back to the initial strategy of camping MaRin. And with Renekton and Elise, a deadly top and jungle combination, KT succeeded in pushing MaRin down once again.

KT took the top tower fairly quickly and used their tempo lead to snowball into numerous objectives. Afreeca couldn’t keep up with KT’s macro play, falling behind. With complete control of the map, KT were free to take Baron, the buff which would secure their series victory. Afreeca couldn’t defend against a Baron empowered KT and fell inside their base.

Now at the top of the LCK standings, KT’s next big challenge arrives on July 25, when they face fellow first-place team, Samsung.