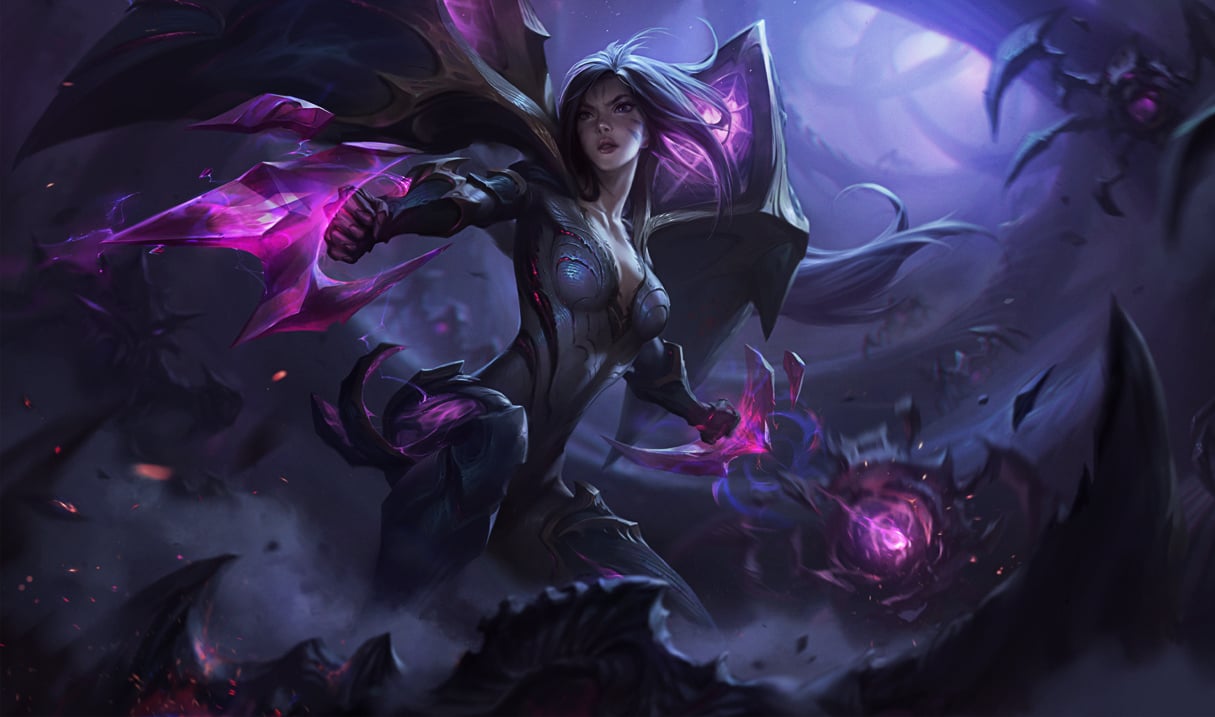 Kai’Sa arrives on Summoner’s Rift this week. To get a feel for her complex playstyle before her release we hopped onto the PBE and experimented with her on the Practice Tool.

As League of Legends’ newest champion, she’s perhaps the most unique ADC in the game. She doesn’t play or build like any other marksman, and she gives her players the chance to adapt their playstyle, abilities, and items to match any scenario they choose.

Understanding each of those different styles and builds is key to playing her well, as is knowing where she falls short in match-ups against the game’s other ADCs. Here are our first impressions of Kai’Sa, Daughter of the Void.

Kai’Sa is the first marksman to join League of Legends that can build AD, attack speed, AP, or various combinations of the three to maximize her transformations. You unlock transformations by hitting very high numbers in any given stats. For instance, you need 100 AD, 100 AP, or 100 percent attack speed.

That’s right, you can build full AP and you won’t even be flamed like that one time you locked in Ziggs bot lane, because her kit literally encourages it.

Out of all her builds, we found the one to deal the most damage was a strange on-hit/AP hybrid build that actually allows her to transform all of her abilities by end-game. Unfortunately, this build is extremely expensive. It features Guinsoo’s Rageblade, Blade of the Ruined King, Nashor’s Tooth, Berserker’s Greaves, Trinity Force, and either the Hextech Gunblade or Runaan’s Hurricane depending on which works best in your game.

This build has the highest sustained DPS and burst damage, with peak DPS reaching around 1,900 and dwindling down to about 1,750 in between bursts from her passive. For reference, full-build Xayah deals about 1,200 peak DPS with a full burst, which is significantly less than Kai’Sa. The tradeoff is that Xayah deals a little bit more AoE damage, making her better in a teamfight, and she can also dish out AoE crowd control. Kai’Sa has no crowd control at all.

She feels like a much more flashy and mobile version of Kog’Maw, whose DPS numbers are only slightly higher than hers. Once she hits 100 percent attack speed, she unlocks invisibility on one of her abilities, which really helps her to maneuver fights, something Kog’Maw doesn’t have.

Her other possible builds are full AP, full AD, or pure attack speed. With full AP, if you sprinkle in a Nashor’s Tooth and Zerker’s instead of Sorceror’s Boots, you can unlock two abilities instead of one. The AP build is better for bursting, as is AD, and the attack speed build makes her more useful in teamfights and against tanky opponents. Her full crit and AD build hovers around 1,600 sustained DPS, and the AP one hits around the same.

When running AP, make sure you take Zerker’s over Sorc Boots and the Hextech Gunblade over the Void Staff. Although she scales well with AP, her abilities all deal physical damage, making any type of magic penetration totally useless.

We already talked about Kai’Sa’s inability to dish out crowd control, but she has some other glaring weaknesses, too, that can make certain match-ups a little complicated.

For starters, although her Q is very flashy, it doesn’t actually deal that much damage, and the more targets in the area, the more it will be spread out and deal even less damage than before. So if she uses it, don’t panic, it looks much worse than it is.

Secondly, it takes a while for her E to trigger, so if she starts the animation mid-fight, you have about a full second and a half to attack her where she isn’t able to do anything. If you’re Kai’Sa, you want to activate this ability while you’re running into a fight rather than mid-fight, so you aren’t caught with no way to fight back.

She can burst down other ADCs fairly well, and she gets most of her power from roaming through the jungle, activating her E, and flanking unsuspecting prey. Teamfights are not her forte, but she can navigate them fairly well, too, when she evolves her E to gain invisibility. Also, even though her W looks a lot like Rek’Sai’s much more harmless ability, it is much, much more dangerous on her.

When the projectile lands, not only does it deal significant damage, it also applies two stacks of her passive. If it’s evolved, she can spam it more and it deals even more damage. The reason it’s so scary is its passive stacking. When she lands four basic attacks on you, it causes her attacks to deal chunks of true damage that ignore all armor and magic resist based on your missing health. If she lands the W on you mid-fight, that’s two less stacks for her to worry about, getting her much closer to bursting you down.

Overall, Kai’Sa is extremely fun. Her abilities are flashy and feel satisfying to use, unlike a lot of other ADCs in the game, and the freedom that comes with playing her is something unique to any other champion in the game, except for maybe Kayn.

That being said, we don’t blame you for wanting to instalock her in solo queue, because we’ll probably do the same. At least now you’ll be a little prepared.