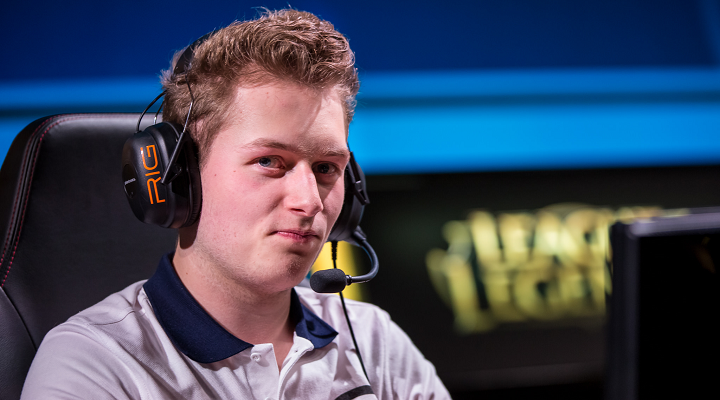 Hi guys, I had the honor to do an interview with Gambit top laner Cabochard, I asked him questions about his playstyle, history, and also got some fun facts!

More of a fun question to start things off, but where did your in-game name come from? When I was trying to research you the first thing that popped up was Cabochard perfume…

It comes from a french rap song, I suppose they made the perfum only after they smellt me ;).

When you first started playing for a notable team, you played on that NiP team with Alex Ich alongside k0u, Freeze, and Voidle. That team looked really strong, especially for Challenger, on paper. Why don’t you think you guys made it in?

I think back then some of the players were really overated, plus we really hadn’t the right mindset so even if on paper the players looked pretty strong at the end we weren’t able to accomplish anything, and failed to even get into the promotion tournament. I think most of us really improved both in mentality and in-game skill since that time tho.

What do you think of Freeze’s current run of form, he’s looking like a real star. Do you have any insight into Freeze as a player/teammate? Does he need a certain context to succeed?

I think Freeze is playing really well right now, probably the second best adc in eu. Its nice that he found a team that plays around him mostly so he can show his potential, and abuse Draven at the same time :)).

What were the circumstances with you getting picked up by Gambit?

I was first contacted when I subbed for LCS Summer 2014 week 5 in London and after that they wanted to go further ; even after I decided to go with NiP we kept the contact and eventualy they recontacted me afer NiP failed, we made some tryout and it worked really well so they decided to take me in the main lineup.

At IEM, you played against CLG top laner ZionSpartan. He was then known for having a really carry oriented playstyle and used Jax against you guys. What was it like playing against him? If you’ve been watching CLG games, do you think they are using him improperly?

It was pretty nice to play against him he has a good laning phase, I’d like to play agaist him again in future since I think both of us have evolved since IEM Cologne. On what I saw from CLG they prefer to snowball botlane but Zion is a player that can play carry oriented as well as some Rumble/Sion as we saw, and he adapted to it pretty well I think.

Why do you think CLG started off the season so strong but then fell off? Do you have any insight from playing them?

Well there is still that problem that everyone speaks about when it comes to CLG, that they keep performing really well during regular season but in playoffs they suddenly play worse, I’m not sure if its because they’re stronger in BO1, they didn’t prepare enough or their players just can’t perform under pressure but its something that they’ll definitively have to fix if they want to become the team they want to be !
Gambit started off the season really slowly. What do you think were the main issues with the team’s slow start?
We had no stable internet the first weeks which made the training very hard, most of they time we couldn’t scrim and not even soloq, on top of that we had no coach so we were going into the games with very little strategy and our gameplay was poor on top of that we just went 0-5 the first five games.
The team removed NiQ and brought in Betsy, spurring a really strong run. What is playing with these two players like? How do you feel about NiQ, do you think he will make it back into the LCS?
They’re very different, both gameplay-wise and personality but I felt that Betsy was bringing more to the team. Plus his more agressive focused way to play just fits us better. Depending on how hard Niq trains he may be able to comeback in LCS ye.
You’re known for having a really wide champion pool. How did you learn all these champions and how important do you think your wide pool is for Gambit to succeed?
I suppose I’ve a fast ability to understand how a champion works and therefore to master him quite fast, but I probably played too many champions the first weeks, like 9 champions in 10 games or something. Its not necessary to play that many champions so at the end I was just playing less of them, whats important is to have enough champions not to be useless if you get target banned, and be ready to play the better situational champion if case its asked from you.
Some analysts have called you the best top laner in Europe, and maybe even the West. How do you feel about this and who do you think are your main competitors for this title?

Im sad not to have been able to prove myself on more games, I think in europe Huni Odoamne and Vizi are in the top 4, and in NA Impact Quas Zion Dyrone are the top 4.

Are there any historically great players you watched when you were learning the game at the professional level that you modeled yourself after?

In EU season 3 I remember watching a lot of Zoro/Soaz, they were prolly the only one inovating in the Shen/Malphite meta, playing new picks such as Ryze and Kennen and have way more of an impact in the game. In other regions I loved watching Shy or Flame. And ofc HotShotNidaleeGG )).

What are the personalities of the individual Gambit members like? Who is the most serious, who is the funniest, who is the leader, etc.

Betsy is the cat of the house, Diamond is prolly the most serious, idk who’s the most troll/funny between Kris and me ^^

Any shoutouts you want to do to close off this interview?

Well i’d like to thank everyone that supports me and Gambit, and thanks for making the interview Ryan !

Thanks to Cabochard for agreeing to this interview, I hope you guys enjoyed it!