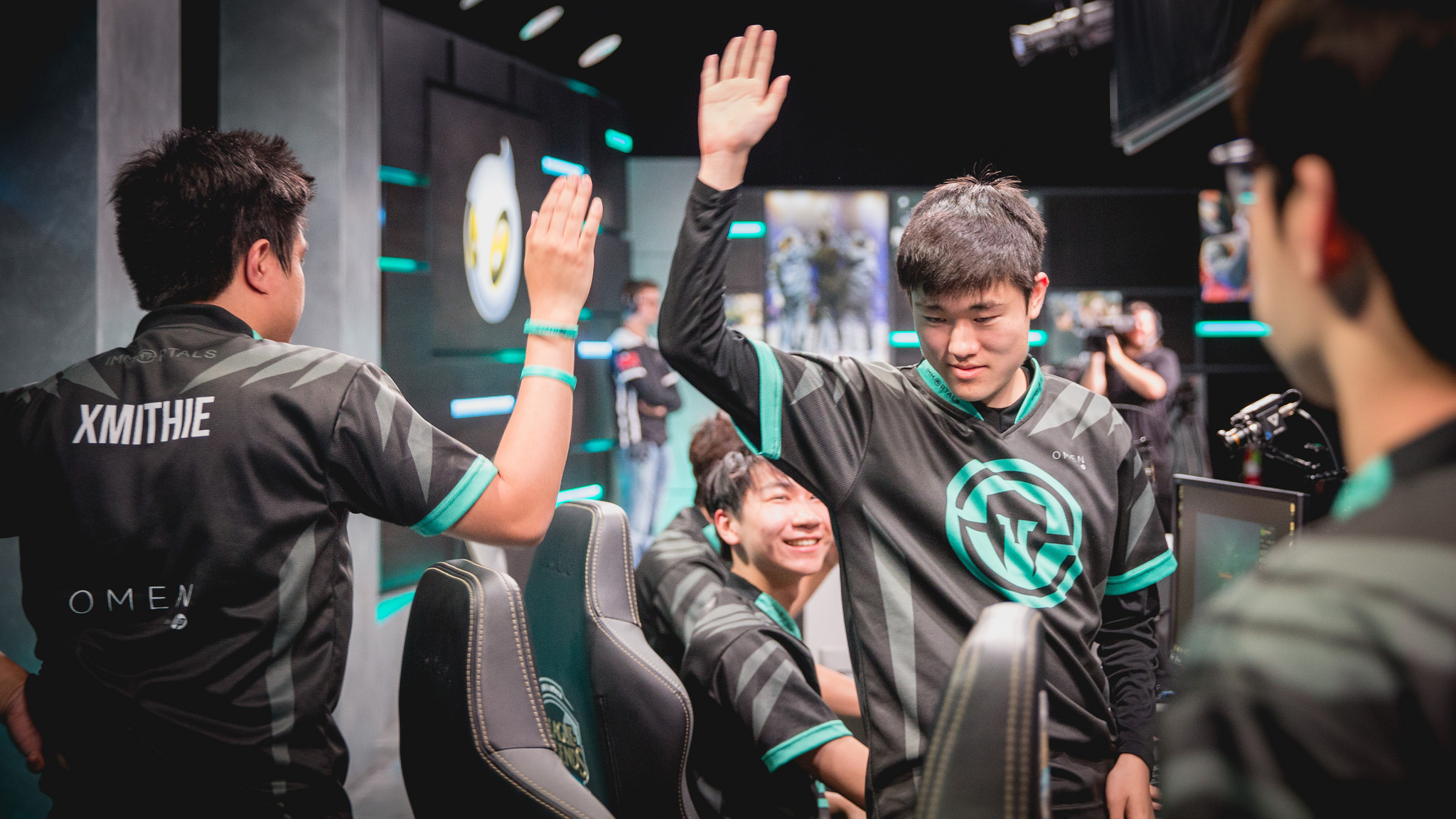 For brief glimpses, you could see the potential.

Josh “Dardoch” Hartnett or Lee “Flame” Ho-jong would dive into the enemy team. Cody Sun was there, kiting around the outside dealing damage while being kept safe by support Kim “Olleh” Joo-sung. Finally, Eugene “Pobelter” Park would flank and assassinate the enemy back line.

But instances like that were few and far between. More often, it was team members going in one by one, dying alone. Missing the playoffs by one match wasn’t unexpected, but it was disappointing, especially for an organization that, through its brief history, has come to expect more.

The team was always expected to be better during the summer when they’d had an opportunity to more fully integrate Flame and Olleh. But then Immortals made the surprising decision to trade Dardoch between splits. Dardoch is an amazing talent, but the team’s shot calling was never crisp with him in the lineup.

His replacement, Jake “Xmithie” Puchero, is known as one of the most steady junglers in North America, someone who is a great team player. The results so far with Xmithie are undeniable—Immortals are in first place in the region. Importantly, they have beaten several strong teams, most recently Xmithie’s old team—and Dardoch’s new one—CLG.

The first game against CLG turned into an Immortals stomp. An early, coordinated roam from Pobelter and Xmithie set up the bot lane for success, while Flame dominated his matchup against CLG top laner Darshan Upadhyaya. It was promising to see Immortals play their comp well even with a weaker mid-jungle setup. But it was game two when their macro play really shined.

CLG opted into an extreme split-push draft, with Darshan on Fiora and mid laner Choi “Huhi” Jae-hyun on Ahri. Both of those champions want to be alone in side lanes. Around them, CLG picked Ashe and Tahm Kench to stay safe in the bot lane, but also with Rek’Sai in the jungle to create picks. CLG wouldn’t be lacking for engage, a weakness of their game one comp.

The catch setup started perfectly. Flame knew that Dardoch was near the top side with how fast Darshan was shoving the save, but could not get out of the gank even with a flash. An early assist for Fiora should have been all she needed to carry the game.

Even on the losing end, you could see that this was a different Immortals team. Pobelter roamed up from mid lane very early to try to help, and even though he didn’t get there in time, it shows that Immortals are on the same page.

Flame teleported back to lane in time to kill a huge minion wave. But Darshan opted to walk back, handing over the CS lead. He did it with his teleport advantage to make a proactive play for his team likely in the bot lane. Instead, it was Huhi that roamed to him, getting another kill on Flame with the assist to Darshan. At 3-1 in kills and Fiora ahead, this should have been CLG’s game.

The duo lane brings them back

Immortals found their way back via the duo lane. Cody Sun and Olleh traded heavily to discourage CLG from making a bot lane play. But they also shoved hard, getting the first recall, and critically, tempo on the next rotation.

CLG is no stranger to lane swaps, having employed the strategy expertly, but they seemed surprised to see Immortals swap the duo lane to the top side after the first recall. With four members there, they almost took the CLG turret before CLG had even pushed the minion wave to their own turret.

They had such an advantage that Flame even had time to teleport to the bot lane and save the turret, so it wasn’t even a trade. CLG got another kill on the way out, but they were way behind in map pressure and tempo. So far behind, in fact, that Flame had time to take the CLG bot lane outer turret on his own and actually go up in gold against the Fiora.

CLG can lament several missed skill shots that could have turned into more kills, but the real issue is that they were not playing around objectives. The kill lead ballooned to 9-2 by 20 minutes, but critically, Immortals had not lost a single turret while taking all of CLG’s outers.

The solo laners join the fray

How do you take turrets while losing fights? By trading sides of the map and not chasing lost causes. Bad teams stubbornly defend objectives they have no hope of winning. Good teams realize where they’re disadvantaged and figure out how to win elsewhere on the map.

Take a pick around the Rift Herald where CLG killed both Olleh and Xmithie:

Immortals made a mistake by trying to go for Rift Herald without pushing mid lane first. They had vision, but CLG made a strong collapse. A couple deaths and a secured Rift Herald could have brought CLG back into the game.

But look at what Pobelter does. He knows the fight is over. Olleh misjudged the map on the initial hook, and Xmithie went too far to try and steal the Herald. But Pobelter understood that CLG and numbers, and Immortals had expended key cooldowns, namely his ultimate and Flame’s TP. Rather than join the fight only to die, he pushed out mid lane while Flame stayed in the bot lane. This made it extremely difficult for CLG to push a turret, even with the Rift Herald.

Meanwhile, Flame’s constant CS’ing was becoming a problem for CLG. At 13 minutes and 56 seconds, the CS differential between Flame and Darshan was 111 to 94, with both players recalling. At 15 minutes, the lead ballooned to 126 to 97 when the two players teleported into a bot lane fight. What happened?

It wasn’t just Flame winning the one-on-one. IMT’s map pressure translated into deep vision, which allowed them to spot Dardoch on the bottom side of the map. Darshan, on the other hand, had no clue where Xmithie was. He couldn’t push past his second tier turret without getting a ward in first, causing him to lose an entire minion wave. He might have also been afraid of getting stunned by Renekton when a fight was brewing in the bot lane.

Darshan is a skilled split pusher, but his eagerness to help his team sometimes works to his disadvantage. The whole play was botched by CLG—they didn’t have the necessary river control to execute the catch and Flame’s TP was up, so there was no numbers disadvantage. They still got a kill by diving Cody Sun under turret, but paid for it by ceding the cloud drake and nearly all the health on their mid lane outer turret.

On the other hand, Flame knew that a fight was brewing, and that by fast pushing the wave, he could force Darshan into that uncomfortable decision. Intelligent, coordinated wave management is the hallmark of a strong team.

Immortals held gold leads in the top lane and ADC, but Huhi’s Ahri and Dardoch’s Rek’Sai were still problems, and the overall gold count was relatively close. IMT needed to act as a team to close the game, and in key fights, they did. At 23 minutes, they turned around a fight that was started by CLG:

What’s interesting about this play is that Darshan, who had just shoved a wave in, chose to walk down the river while Flame used his teleport. That difference was huge as it allowed Immortals to quickly eliminate the CLG duo lane, and critically, Trevor “Stixxay” Hayes’ Ashe. It wasn’t much of a victory, but it was the first time in the game that CLG won a teamfight. It wouldn’t be the last.

A minute later, they used the Taliyah wall to separate CLG and took down Dardoch, getting a free Baron as the prize. Facing Baron, CLG just fell apart. Look at the map in this play—Darshan already has a slow push going in the top lane. There are no objectives on the top side. What is he still doing there?

Instead, Stixxay initiated when Darshan was recalling, CLG was the team that went in one-by-one, and they were wiped off the map. So many things went wrong for them: Darshan could have teleported, or just started recalling once the slow push was started. In either scenario, he would have joined the fight long before his teammates were dead.

On the other hand, Immortals went in as a unit and when Olleh dove, they all followed. That’s why they’re the best team in North America right now. They have the individual talent all along, but now they’re playing as a cohesive unit, even against a squad with great chemistry like CLG.