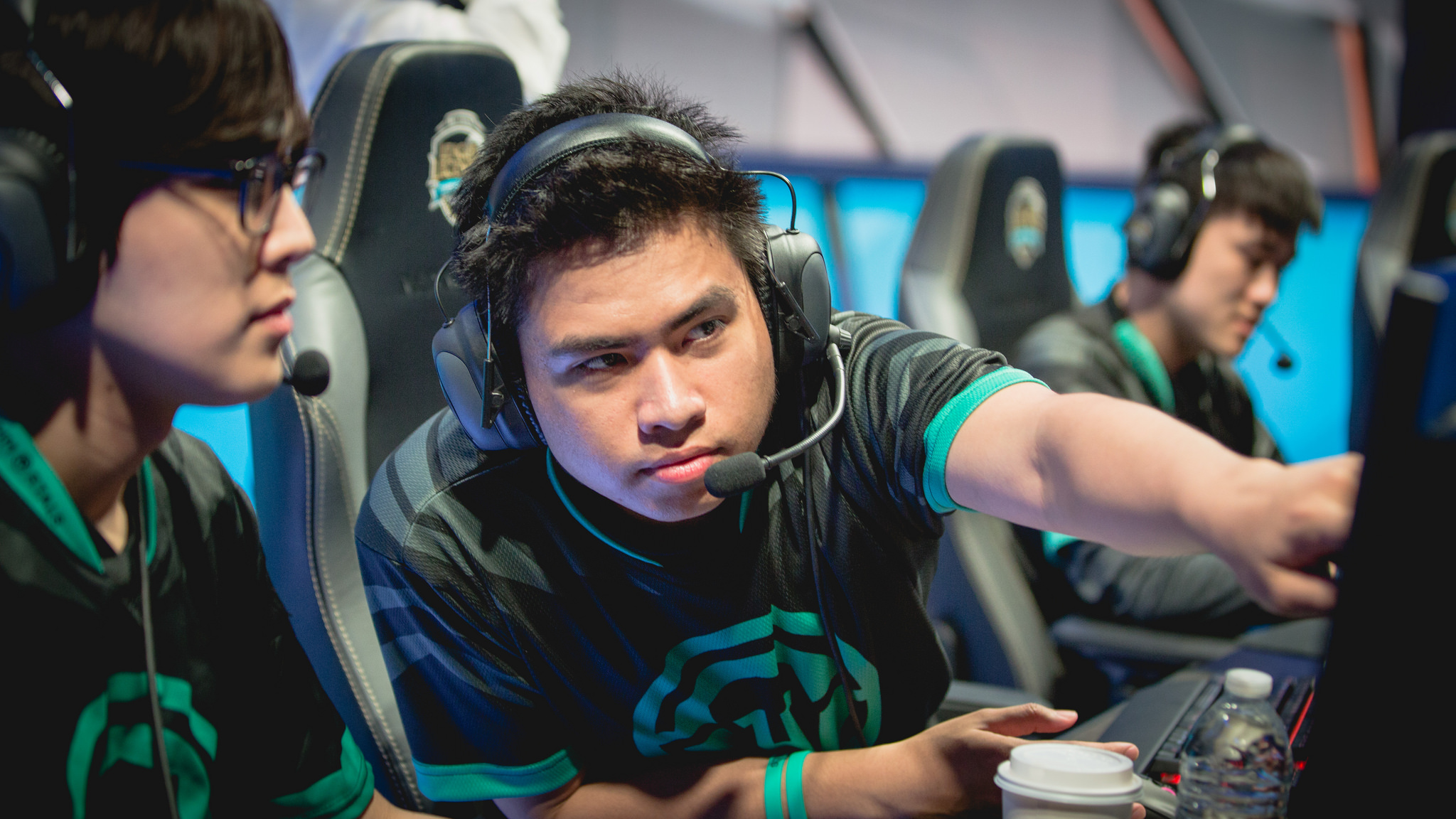 As one of League of Legends’ original pros, Jake “Xmithie” Puchero has seen it all.

He started competing in what is now known as Season 1, a time where organized leagues were pipe dreams and smaller tournaments ruled. His first real success came in Season 2, when he switched to the jungle position and won the third SoloMid NA Invitational with mTw.NA.

Prize pools back then were tiny—just $1,200 for that win. But Xmithie kept plugging away, carving out a unique identity as a supportive jungler, primarily on his favored Lee Sin. He even made it to Worlds at the end of Season 3. But his team eventually disbanded following a disappointing 2014.

That’s when CLG came calling. He was re-united with support Zaqueri “Aphromoo” Black (who he played with on mTw) and other top talents: ADC Yiliang “Doublelift” Peng, fellow newcomer Darshan Upadhyaya (then going by the username “Zion Spartan”), and eventually, mid laner Eugene “Pobelter” Park. With all that talent, CLG stormed to two straight NA LCS championships and a surprise appearance at the final of the 2016 Mid-Season Invitational, where they played a series of entertaining games against Korean giants SK Telecom T1. The loss was expected, but CLG showed that they had something to prove and didn’t back down for anyone.

Over two-plus years, a few long playoff runs, and several International events, Xmithie had become part of CLG. Together, they weathered a near-constant barrage of criticism to produce amazing results. Xmithie’s biggest takeaway from his time with CLG? “Not really caring about what anyone thinks of you, except for the ones you work with.”

That’s why it was such a bombshell when CLG traded Xmithie to Immortals last month.

A new beginning with Immortals

Two years is a long time in esports, and roster changes are a fact of life. But it was still a shock to see Xmithie go. Part of the blow of being traded has been softened by Immortals’ reputation for taking care of their players. “Everyone is pretty welcoming in IMT, so it was really fast to get used to the atmosphere,” Xmithie explained. “The house is really close to LCS and I love it. The only downside to it is sharing rooms, but other than that everything is really great.”

There will be things about CLG that Xmithie will miss. “My first feeling was that I’m gonna miss [CLG gaming chef Andrew Tye]’s food,” Xmithie told Dot Esports. Other things he’ll miss include “Darshan singing too loud in the shower, board game nights, and going to dance class weekly at Kinjaz.”

Playing outside the familiar confines of CLG’s strategy may seem daunting, especially since Xmithie will be taking the place of Joshua “Dardoch” Hartnett. Dardoch is a true carry jungler, someone whose mechanical prowess is only matched by his fierce temper. When asked what advice a wise veteran would give to Dardoch, Xmithie did not mince words: “be humble.”

Xmithie knows he can’t replicate Dardoch’s mechanics, and Immortals didn’t bring him in to be the same player. Instead, he’ll play the same role he’s grown accustomed to since the very beginning: the sage. Immortals’ issues weren’t usually mechanical anyway, not with Lee “Flame” Ho-jong on the roster. Xmithie even compared rookie ADC Cody Sun to CLG’s Trevor “Stixxay” Hayes, one of the best in the region: “Stixxay and Cody are really similar mechanics-wise and open for improvement.”

Xmithie is glad that the team valued the player he has become. The idea is that his stabilizing presence will help the team transfer its scrim performances to the stage and learn to fight as a unit, two things they struggled with in spring. “I always knew they were great mechanically but there was no one in the team to rally everyone and work as a cohesive unit,” he said. “I think I can provide that now.” Pressed on what changes he could bring to the table, Xmithie explained that “I always want my team to be really comfortable around each other and set up a really positive environment, since that’s what I think makes the team improve the most.”

The early results are promising. The team has started fast outside a loss against the surprisingly good Team EnVyUs. This looks like a playoff team, but Xmithie doesn’t want them to settle—he has Worlds on his mind. “I think our team has the potential to do great at Worlds and that is my goal every time Summer Split goes through,” Xmithie said.

Through a long career playing League of Legends, Xmithie has settled on what type of player he is. He’s comfortable in his own skills. But don’t think for a second that means he’s settled in terms of accomplishments or has stopped improving as a player. Look out, North America, Xmithie is coming for you.