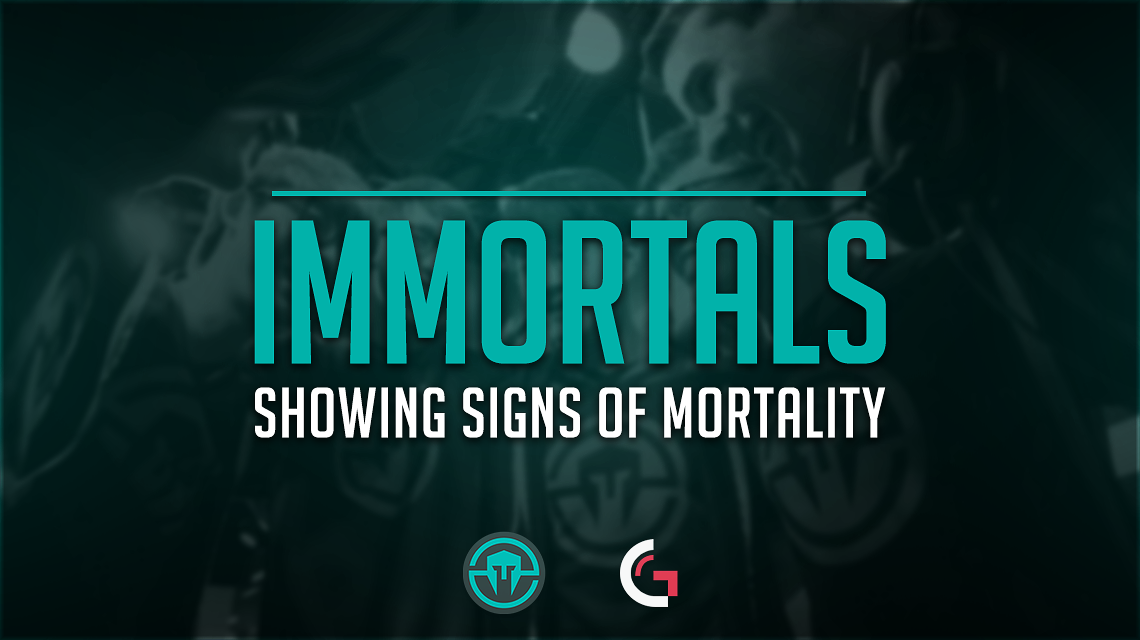 This article is the fifth of six that will be highlighting every North American League Championship Series team that made the playoffs, starting with the six-seed and going up. If you would like to read the rest, here is the link to my author page. For anyone paying attention to this series, I apologize for the delay.

Without further ado, the current squad: Immortals. Before we dive in, let’s look at the roster:

Going into the Spring Split, this team was surrounded with hype. Practically everyone expected Immortals to dominate the competition during the split and the playoffs. Well, half of that happened. During the Spring Split, Immortals dropped only one game to Counter Logic Gaming. They beat everyone else quite handily. With the playoffs, however, came a new meta, and maybe a little cockiness. The team made heinous and extremely questionable draft choices en route to a 3-0 sweep from Team SoloMid, which forced their dominant split to come into question.

Yes, they destroyed everyone (except CLG, once), but Immortals faltered when it mattered the most. It was not even close, either. The series against TSM was just ugly. Immortals rebounded by winning the thirrd-place match 3-0 against Team Liquid, but questions lingered about the team’s mindset and ability to adapt.

Once the Summer Split started, all of those questions were answered. Immortals dominated the field of play, living up to their name with the exception of two losses to TSM. This team beat everyone, relatively easily, except for the best team in the league, and this time they did it in best-of-three series and adapted to the meta as it changed.

But something still felt off to me.

This team is dominant, but some of their issues are blatantly obvious. They won this split based more on teamwork than last split, but it still is not enough. All too often, individual skill is relied upon and Reignover must step up and play like a god in order to make certain that his team walks away victorious. Against most NA teams, this is not a big problem. Let’s be real here, most NA teams are not actually that good individually or as a team. Against the stronger teams in NA (TSM, C9, CLG), and against the top teams at Worlds, this will not work anymore. Just as a side note, Reignover would almost certainly be my choice for league MVP if I had a vote. The man keeps this team running like the well-oiled machine we all expect it to look like, but we’ll get back to that in a minute. Right now, I want the focus on Huni.

Huni is an anomaly. His style of play really should not work, but it does. Top laners in this meta have been important to team success for sure, normally playing as tank, engage, or crowd-control (stuns, knock-ups, snares, etc.) champions, depending on the team composition as a whole. Huni does not exactly fit the top lane stereotype. He plays engage and damage-dealer champions, a lot. In 43 games, only eight were on tank champions. Two of those eight games, he did not build tank. I don’t even know for sure if Huni knows what it is like to play a true tank or CC champion, because the fact is he practically never does it. So his champion selections are not exactly what you would call team-oriented. What’s worse than his picks, though, is how he plays them.

Watch an Immortals game, and you will see one thing for certain: Huni dying, a lot. The only player in the entire league that died more than Huni was Phoenix1 support Brandon “Mash” Phan. Top laners tend to die a lot as they frontline in team fights and try to keep their carries alive, but Huni is a bit excessive. Arguably the best three top laners in the league aside from Huni, Kevin “Hauntzer” Yarnell, Jung “Impact” Eon-yeong, and Samson “Lourlo” Jackson, all died less than 100 times this entire split, with Hauntzer even dying less than 90 times. Meanwhile, Huni died 147 times. He charges in with no care for his own life. He is reckless. And still, his KDA is better than all top laners aside from those three. How? He gets a ton of kills. If Huni dies, it is almost a guarantee that he will take one or two enemies down with him.

Jeon “Ray” Ji-won, top laner for Apex Gaming, is very similar to Huni in both stats and play style. The difference is, Apex does not have anyone else to rely on. Huni and Ray both have an above-average share of their respective team’s kills and gold. For Apex, this puts the hopes of the team on Ray’s shoulders. The other members of the team cannot deal with the lack of resources, and quickly fall into bad positions against their opponents. Immortals, though, is so talented individually that it simply does not matter. Huni can take all the resources he wants and die all he wants, because WildTurtle, and especially Pobelter, are just that good. They can do so much more, with so much less.

Aside from Søren “Bjergsen” Bjerg of TSM, Pobelter is the best and most efficient mid laner in NA. In comparison to other mid laners in NA, Pobelter is given the third-least gold share per game, yet he has the second highest average gold earned per minute. This is only possible because of just how good every player on Immortals is. Pobelter has a very low gold share and a lot of gold, because his team constantly has such a huge gold lead on the opponent that gold share percentages start to become inconsequential. The story all split in the mid lane has been a fight between Bjergsen and Nicolaj “Jensen” Jensen of Cloud9, but Pobelter is being ignored. Did I mention that he has the highest average damage per minute in the entire league? Not just from mid laners, but everyone. Finally, Pobelter will be able to prove in a best-of-five series with everything on the line, if he can take down Jensen.

Reignover is, without a doubt, pointblank, end of discussion, the best jungler in the west and possibly the world. Reignover is the most active jungler in the league, with more total kills, deaths, and assists than any other jungler, and a higher control over the enemy jungle than any other jungler. Reignover is involved in more fights than any other jungler in the league, walks out on top, and takes his enemy jungle camps. Basically, he is everywhere on the map at the same time. Huni is diving the top lane turret and is an inch away from death? There’s Reignover, doing just enough damage and tanking turret shots to let Huni get the kill. The enemy jungler is ganking the duo lane? Reignover is either countering in a different lane or immediately stealing enemy jungle camps. He is involved in a ton of fights, but Reignover doesn’t seem to die very often. Most of those fights end with Reignover securing kills or assists. He has the second-most kills and most assists out of all junglers in the league, and the fourth-most assists in the entire league. Ever the enabler and nice guy, Reignover feeds his teammates kills and resources through tactical play. He does not rely on anyone, and instead relies on his own strategies and tactics, keeping himself and his team ahead, no matter the cost. Reignover is the smartest and most talented jungler that the west has ever produced.

The duo lane for Immortals is one of the most potent in the league. WildTurtle and Adrian are very aggressive, just like the rest of the team. But, also like the rest of the team, this lane is not as effective as it was in the Summer Split. Last split, this squad got a little too used to being the only talented team with an aggressive style. No one could stop them. It was too easy and they lost their edge. That’s how they dropped their one game to CLG, and that’s (partially, along with inability to adapt to the new meta) how they lost to TSM in the playoffs. Yet, they kept playing the same way; just as aggressive and focused on killing. Other teams finally picked up on this during the offseason though, and they were prepared. Immortals was no longer the only team that was both talented and aggressive, and they were too aggressive. Numbers don’t mean everything, but think about this: In the Summer Split, the team KDA was 2.09, while this split it was 1.30. The number is still impressive, but that is a massive drop. Individually, every player’s KDA has dropped by at least 2.20.

This team is not aptly named. They are, each of them, (though mainly Huni) far from immortal. This is the most aggressive, in-your-face team in the entire league. Every player on the team gets in confrontations all the time, getting kills and dying constantly. They survive games simply by killing their opponents more often than their opponents kill them. It’s quite simple in theory, but not so much in execution. As a team, they do it well. With a ridiculous (and devilish) 666 total kills in the Summer Split, Immortals has 60 more kills than the next highest team. No other team kills like Immortals. More than anything, though, they get this many kills because they are individually aggressive and strong, with Reignover roaming the map and ensuring kills. It may seem like team coordination and working together, but, for the most part, it isn’t. Teamfighting is not a strength of Immortals, and their team compositions are almost never built to fight together. They are built to get each player individually ahead of their opponent. This may not seem stupid, but it kind of is. This squad is very, very lucky that no team besides TSM has punished such a huge hole in their strategy. Pobelter has even voiced his frustrations with the team’s inability to adapt, even after learning their lesson. In an interview with theScore eSports, Pobelter discussed his annoyance with his team’s inability to draft team compositions with tanks and CC. They have played five series since this interview, and still nothing appears to have changed.

Most people likely began reading this article and expected it to be full of praise for Immortals, but as a team, they do not deserve my praise. As players individually, yes, but not as a team. Does this bode well for NA as a region going into Worlds? If a team with such a fundamental flaw can get an almost-perfect record two splits in a row based significantly on brute force and individual talent, just how strong is the NA LCS? That is a question for another day, another article perhaps. One thing is clear: In their semifinal match against Cloud9, Immortals will need to adapt to the new meta properly or be prepared to lose.

Will Immortals prove that they are a real team, ready to take on any challenge? Can they emerge as the victors of the NA LCS? Let us know by commenting below or tweeting us @GAMURScom.