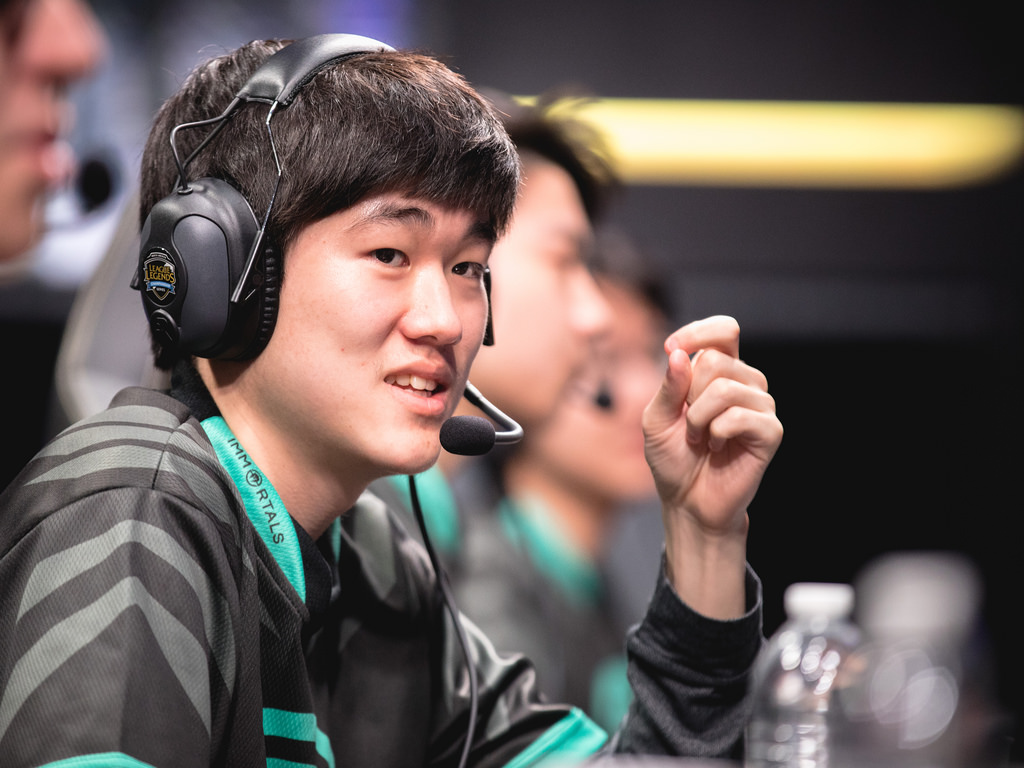 The new year saw a new team for Immortals. Losing four of its five players to the 2016 postseason, Immortals was forced to rebuild Its roster.

But unfortunately, that potential was never unlocked.

Communication issues and clashing personalities created unfixable problems both in and out of game. Ultimately, Immortals let go of Dardoch, who was seemingly the cause of these problems. In Dardoch’s place comes former CLG jungler Jake “Xmithie” Puchero, and Kim “SSONG” Sang-soo, who previously coached the ROX Tigers and, more recently, Longzhu Gaming.

Wildly different from their predecessors, Xmithie and SSONG will undoubtedly change Immortals identity.

The ying to Dardoch’s yang, Xmithie’s playstyle is the complete opposite of Immortals’ former hotshot rookie.

Dardoch can aptly be described as your typical carry jungler. Proficient on champions like Lee Sin, Graves, and Kha’Zix, Dardoch aims to be the player who carries his team to victory. To reach that goal, Dardoch plays out the early game aggressively, vehemently searching for an early advantage, whether it be a kill or objectives, in order to snowball himself out of control.

It’s a double-edged sword. While this playstyle succeeds at times, playing aggressive can backfire and get you killed, causing the lead to swing over to the opposing side. But Dardoch, who in his time on both Team Liquid and Immortals was made to be the primary carry, embraced these risks for the potential high reward.

In contrast, Xmithie’s playstyle is much more reserved. Instead of taking risks, Xmithie will more often than not take a safer approach, playing out the early game slow and methodically. Unlike Dardoch, who plays to carry, Xmithie will facilitate leads for his teammates, playing a more supportive role.

This supportive playstyle is reflected by the champions Xmithie has found the most success on: Rek’Sai, Gragas, and Olaf. Xmithie flourishes when these tanky champions rotate into the meta. You’ll find Xmithie at his best when he can be his team’s shield, soaking in enemy fire while releasing different forms of crowd control.

At the end of 2016, SSONG left his coaching position on the ROX Tigers to follow Kim “PraY” Jong-in and Kang “GorillA” Beom-hyeon over to rival LCK team, Longzhu Gaming.

Now playing for a team known for having little to no macro game ability, SSONG had a lofty task before him. Surprisingly though, he succeeded. In the first five weeks of the Spring Split, Longzhu looked great. The team understood how to play the map well, a concept that once seemed foreign to Longzhu.

Usually it’s hard to attribute a team’s success to the coaching staff. With no real insider perspective into how a team operates, the community has no way of knowing how important a specific coach is.

But for Longzhu, it was clear that SSONG was an integral part of the team. Midway through the split, SSONG inexplicably left. And as soon as he did, the team worsened, regressing back to where they were before.

While not as severe a case like Longzhu, Immortals’ macro play in spring was in dire need of some form of help. Immortals’ players lacked synergy, and it was visible for all. For most of the split, Immortals played like five distant individuals, rather than one cohesive team.

As someone who’s shown a proficient understanding of macro game, SSONG’s addition should hopefully rectify Immortals’ macro game problems. And being a native Korean speaker, SSONG will be able to better communicate with both Flame and Kim “Olleh” Joo-sung, Immortals’ two Korean imports.

Although a new jungler and coach have joined the fray, Immortals’ chances at a playoff spot ultimately rest on the shoulders of the team’s four remaining players.

Xmithie may be a methodical jungler who has great game knowledge, but he won’t be the person that carries Immortals to victory like Dardoch was. Immortal’s success will now rely on performances from Flame, Eugene “Pobelter” Park, and Cody Sun. SSONG can try to teach proper macro play, but if his words fall flat to these players’ ears, no amount of ganks from Xmithie will help this team get through the mid and late game. Immortals will simply revert to the aimless team of early 2017, unable to play as a cohesive unit.

But now Dardoch won’t be there to save the day.