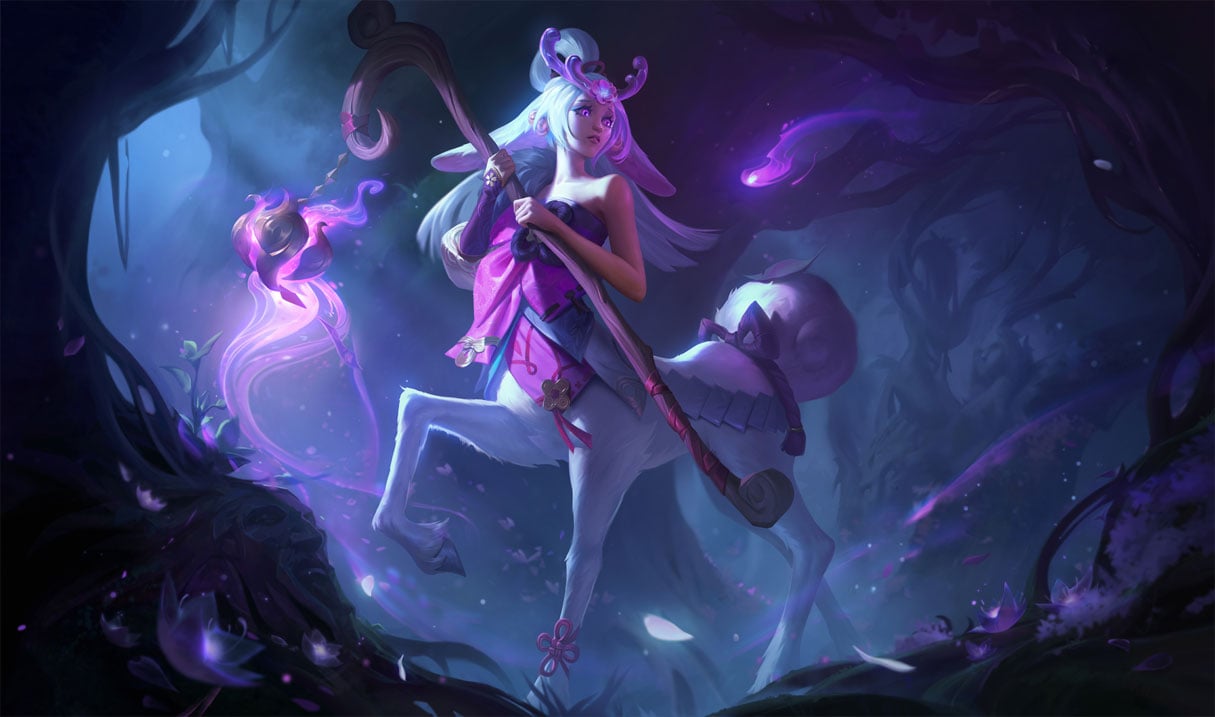 Lillia, the Bashful Bloom, is League of Legends’ newest champion.

Lillia’s kit has her in an interesting position of a close to mid-range skirmisher, with spot chances to have long-range initiation. Players that are looking for a mobile magic damage laner or jungler that can orb walk and out-kite opponents can find a strong champion to practice and add to their repertoire.

Here’s what you need to know to help you master the Bashful Bloom more efficiently.

Since Lillia has potential in either solo lanes or the jungle, there are multiple keystone runes she can pick to complement either her user or team composition. If you’re solo laning, Phase Rush, Conqueror, and Arcane Comet are all viable choices depending on the matchup.

Conqueror lets you extend leads if you can consistently hit your abilities against a slow melee opponent without speed boosts or dashes. Phase Rush lets you match opponents that have a mid-range comparable to yours or a speed boost similar to Lillia’s Q passive. Arcane Comet is an alternate route to go if you find yourself in a ranged matchup when the opponent has no sustain. Hitting your Es and Qs can eventually force an opponent out of lane as the slowdown granted from E nearly guarantees Comet to land to add to your poke.

When you’re jungling, Dark Harvest or Electrocute are go-to choices since getting extra burst damage on ganks can help push your damage a little over the edge to secure kills for your team. If you find yourself fighting against a low-tempo early jungler, then Dark Harvest can be more fruitful if you can find more gank opportunities against opponents to let it stack more.

Whenever Lillia hits an enemy champion or monster with her abilities, she marks them with Dream Dust. The passive mark deals damage to enemies over time based on their maximum Health.

Lillia’s Q has a passive and active component to it. Passively, whenever Lillia damages enemies, she gains bonus movement speed over time. This bonus movement speed can stack up to five times. As an active ability, she quickly sweeps the area around her dealing magic damage to enemies hit within the circle around her. Much like Darius’ Q, there is a slight delay before the damage and hitbox is active, and enemies that are hit by the edge of the circle will take extra damage.

After spending enough time winding up, Lillia smacks her stave to deal magic damage in a nearby area, dealing extra damage to enemies caught in the center of the blast. While it may be tough to land the maximum damage circle when first playing her in quick skirmishes against mobile opponents, being able to hit the center on crowd controlled opponents, like from your ultimate, can lead to massive damage opportunities.

Lillia throws a seed that deals magical damage and slows enemies it hits, if the throw misses, the seed rolls until it collides with an enemy or any form of terrain.

Due to the nature of Swirlseed’s throw in conjunction with the long-range rolling, Lillia can hit enemies from unsuspecting angles and lead it into devastating initiations. With perfect vision, information, and practice, Swirlseed can be a nightmare for your opponents to deal with.

In this first example, you can throw the seed and hit players in the popular pixel brush spot. Practicing this initial spot will help you gauge the amount of distance you need your Swirlseed to cover to consider going over the wall and not whiff on the wall to explode on it.

In the second clip, this proof of concept angle shows that you can throw from the Gromp adjacent bush to affect either top or bottom side lane. When compared to the next clip, this one shows how much range and coverage you can hit when trying to gank a sidelane with your E.

Out of all the clips shown, this one will be the one that you should get most familiar with when you’re jungling. Once you hit level six, lane ganking should be a common option for you to consider when trying to gank unsuspecting opponents. This path is especially strong when you know where opposing wards are placed.

In this example, if you’re sieging mid lane, you can take either end around the mid tower and hit nearly any angle outside of the enemy base. If you’re far enough ahead, any opponent trying to defend the tier-two turret will take too much damage to stay if they’re alone.

This clip can show the versatility when trying to secure an epic monster like Baron or Dragon. If an enemy tries to reach the pit from behind the long way, Lillia’s E can start hitting them from far away, which can threaten the enemy with a turn from your entire team, or crowd control from your R to slow their approach.

While this sixth clip example is not the most difficult one to hit when compared to the others, it serves as a reminder at how creative you can get when throwing your Swirlseed, as you can impact the bottom lane from halfway across the map at mid lane.

Practicing hitting your Swirlseeds is vital, since missing an E early without cooldown reduction will cost you a lot of time, mana, and effectiveness. Whenever you attempt to throw a Swirlseed that passes through minions, you need to always look at your own minion’s positioning to know if your Swirlseed can avoid enemy minions.

Enemies with Dream Dust, at any range, become drowsy. After the initial delay, enemies will fall asleep for a couple of seconds. Any damage taken by the enemies will wake them up, dealing bonus damage to them if awoken this way.

Where Swirlseed serves as an initiation tool to get you to fights faster by hitting enemies from far away, Lilting Lullaby serves as an extra followup to crowd control those enemies caught by the Swirlsweed after hitting level six.

How to have an optimal jungle clear

Since Lillia’s kit revolves around accruing massive movement speed bonuses, you can use this to your advantage to maintain a healthy clear with proper kiting around camps. Getting used to the rhythm of Lillia’s attack move can let you understand how much you need to move in between auto attacks and ability casting before you need to stop to do it again. Understanding this back-and-forth timing between moving and attacking will allow you to disallow slow melee monsters from ever damaging you.

Once your passive Q stacks reach maximum movement speed, then you can begin properly kiting wolves to take only every other attack. After enough attempts, by the time you reach Scuttlecrab when it spawns, no matter which clear path you choose, you should be close or full health with a smite to secure the crab in case an enemy jungler shows up.

Laning, ganking, the mid/late game, and item paths to consider

As shown with the Swirlseed example shots, your ability to gank after level six can have unconventional angles, similar to Zac’s Elastic Slingshot, since your ultimate ability’s crowd control can give you time to close the distance. Before you’re level six, conventional ganks through either the river, behind the enemy, or walking up through lane are your best only options.

Since Lillia does not have dashes or blinks, starting a gank with your E to hit an enemy can help you gain extra movement speed, while slowing your opponent down, to eventually hit them with your Q and W.

When laning with Lillia, note the opponent’s important damage cooldowns in addition to their movement cooldowns. This is because Lillia can punish opponents fairly easily that waste their dash and can give chase and pivot between quickly retreating after receiving multiple passive Q stacks.

Once the mid-game arrives, your role in teamfights will alternate depending on your composition. If your team doesn’t have much frontline, then going a more bulkier offtank option, with Rylai’s and Zhonya’s, can allow you to get into the center of teamfights to absorb enemy damage and an opportunity to hit multiple opponents with a Q followed by an R. If your team is more poke heavy, maximizing ability damage, cooldown reduction, and magic penetration if the enemy picks up a lot of magic resist can allow you to add to the endless barrage of projectiles for your opponents to avoid and worry about.

Besides the item options already mentioned, Liandry’s Torment is a good item that synergizes with Lillia’s kit because her abilities have her inclined to stay around longer in combat, and compound with her damage overtime from her passive dream dust mark. If you’re up against an enemy with a lot of health regeneration, Morellonomicon fits well with Lillia’s build, as the Grievous Wounds helps counter the healing, and the flat magic penetration is a stat that Lillia will always appreciate.

Lillia’s weaknesses to play around

Since Lillia’s strength comes from her kiting ability and gaining bonus movement speed, champions with instant and targeted gap closers, like Rengar or Ekko, can prove to be painful for Lillia players to deal with early. When laning, Lillia also struggles with enemies that can sustain through prolonged fights effectively, like Vladimir.

With enough camera control, mastery, and imagination, you can eventually find more opportunities to make big plays and secure victories with Lillia.