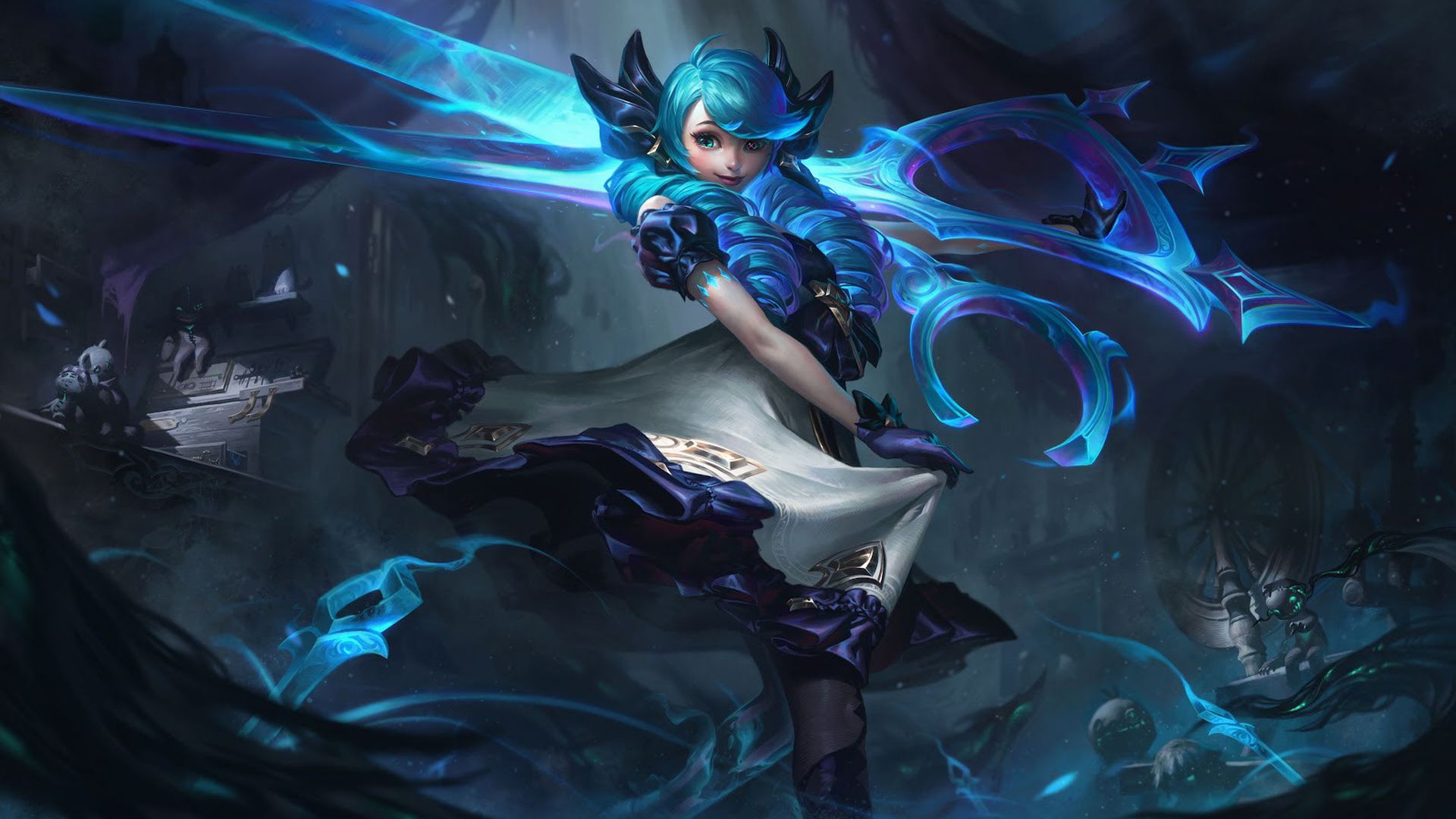 Gwen, the Hallowed Seamstress, is League of Legends’ newest champion.

As the second champ to be released in 2021, Gwen is the designated top laner for this year’s cycle of champions. Gwen has play patterns similar to a strong duelist that’s mobile and can effortlessly weave in abilities and auto attacks together much like Irelia. Gwen’s strength lies in the knowledge of understanding when to use her abilities since they provide a wealth of opportunities when used at optimal times.

If you’re searching for another high-tempo laner that excels at fighting constantly, consider adding Gwen to your champion repertoire.

Here’s everything you need to know about how to play Gwen.

Since Gwen’s kit is relatively flexible and can be taken into either the jungle or a solo lane, there are a few keystone runes that you can consider selecting. Press the Attack is the most ubiquitous of the runes since it allows for a strong dueling presence and gives any allies around you a damage boost on your focused target. If you’re laning, Conqueror is the most synergistic keystone due to the constant trading you’ll be doing with Gwen’s Q and E.

If you’re going into the jungle, then you’ll probably want to pick either Dark Harvest or Electrocute to boost your damage for any ganks you perform.

Here’s a breakdown of Gwen’s abilities:

Gwen’s basic attacks, and some of her abilities, deal bonus on-hit magic damage that’s based on a percentage of the enemies’ maximum health. All of your basic attacks against champions will also heal you based on the damage dealt.

Snip Snip is a short-range skill shot that deals damage in an immediate area in front of you, dealing true damage in the center. It’s your main tool for dueling. To get the most efficiency out of it, you should aim to perform four auto attacks before activating it. This is due to the fact that you perform extra cuts for each auto attack you make before Snip Snip’s activation. Aside from the true damage dealt in the center of your Q’s hitbox, you’ll also activate Thousand Cut’s damage passive, dealing bonus damage.

Since Gwen’s Q has a cast time, you can flash during the small window, as shown in the clips below, to surprise your opponent with a quick burst from a moderate range. Since the cast time is incredibly quick, this is more advisable to perform when you have six cuts primed to activate.

Gwen’s W is similar Xin Zhao’s R and Poppy’s old ultimate. Gwen creates a quick zone around her for five seconds, gaining bonus resistances while she’s in it. Enemies outside of the area can’t target or harm her with any abilities. If Gwen tries to leave the area, the mist will follow you one time. But trying to leave a second time will make it dissipate prematurely.

Due to the pseudo-invincibility this ability provides, you can use it like a parry against ranged attacks in a pinch to avoid devastating burst or crowd control. While the zone seems useless against melee opponents, you can use it during skirmishes to gain bonus armor and magic resistance when the battle gets going to get extra stats and keep the fight in your favor.

Gwen’s E has her dash a short distance and empowers your basic attacks with increased range, speed, and on-hit magic damage for four seconds. If you can perform a basic attack against an enemy during Skip ‘n Slash’s bonus, then you refund 50 percent of the ability’s cooldown.

While you can use Skip ‘n Slash defensively to run away, Gwen’s E rewards you for aggression since halving the cooldown allows you to keep tempo in any matchup. If you’re in an extended escape scenario where you’re running a long distance, try performing an auto attack during Skip ‘n Slash’s duration. This allows for a potential second dash that can be used to go over thin walls.

Gwen’s R is similar to Irelia’s old ultimate in that it’s a long-range skill shot with many ammo uses that deal notable damage. While Gwen can activate her Needlework up to three times, she needs to hit an enemy within eight seconds to perform each subsequent cast afterward. Aside from dealing damage, Needlework applies a slow and activates her Thousand Cuts passive.

In addition, every cast of Gwen’s R fires a different amount each time. The first cast will fire one needle, the second fires three, and the final cast will shoot five. This means to gain the most optimal use out of your ultimate, you need to remain in combat.

Due to Gwen primarily dealing magic damage, Riftmaker and Night Harvester should be your go-to choices when considering your Mythic Item. Riftmaker is good for extended trades due to the Omnivamp sustain it provides, in addition to the true damage it can yield if you’re in a fight for a long enough time. Night Harvester is wonderful if you expect to be in shorter skirmishes since it provides bonus damage and movement speed when hitting an enemy champion.

Aside from these two Mythics, Hextech Rocketbelt and Luden’s Tempest are other choices you can consider if you have a comically large lead that you want to continue accentuating. Rocketbelt provides more movement options and it’s an auto attack reset if you’re already in range and want to deal more damage.

Luden’s Tempest should only be considered if you’re not worried about the damage output of your enemies since it provides you with more mana to stay on the battlefield for longer but gives no bonus health.

When deciding on Legendary items, Nashor’s Tooth is a potent tool you should always aim to purchase due to the attack speed, which Gwen always appreciates, and bonus damage it provides. If you need more bulk, Banshee’s Veil and Zhonya’s Hourglass can either provide a spell shield and bonus magic resist or stasis and bonus armor, respectively. If you want more ability casts and movement speed, Cosmic Drive is a good item that combines well with your kit.

If you’re laning with Gwen, understanding the power points of your opposing laner is a key to success. Your main goal is to trade when you have maximum stacks for your Q since that’s a notable damage spike. If your opponent tries to run from you when you have a health advantage, you can match their escape with your E and perform more auto attacks while they flee.

When laning against a ranged opponent, understanding which abilities are most dangerous to you will aid you immensely in lane thanks to your W. If you can react to your opponent’s skills and make your Hallowed Mist render their ranged attacks useless, you can threaten your opponent with a long trade.

If you take Gwen into the jungle, know when you can clear multiple camps at once due to your Q’s AoE ability. This is risky if the enemy jungler invades you while you perform a double camp clear at the same time. To avoid this, good vision control will allow you to optimize your clear. In addition, you should practice kiting between your auto attacks since forcing the jungle monsters to move between their basic attacks will have them deal less damage, giving you extra effective health.

Once the laning phase ends, how you adapt your game plan will depend on the items and runes you built. If you’re ahead, you can either keep bullying your opponent and prevent them from having an impact on the game or roam around the map and spread your influence to help your teammates accrue advantages.

If you’re building like a duelist, then constantly splitting and drawing attention on opposite sides of the map will benefit your team. A major weakness to this playstyle is that you must be aware of what objectives will be on the map soon. If you fail to position correctly on the map, you risk losing important objectives like Dragon or Rift Herald.

When the late game arrives and if you were a laner, you need to figure out if you bring more value to your team by being in teamfights or by constantly splitpushing and drawing attention from the enemy team. When you’re in a teamfight, proper use of your W will be imperative since you’re not as bulky as other duelists are usually without the Hallowed Mist. If you’re the jungler, you should always look toward keeping vision and being on the side of the map where important objectives like Dragon and Baron are.

You can try out Gwen when she’s released with League Patch 11.8 later today, April 14.