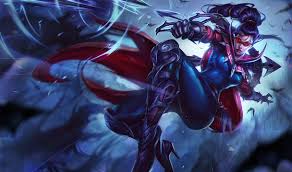 Nowadays, the strategy underlying League of Legends is very well developed. Pro teams pay a full coaching staff to refine strategies. Even the most basic of players will know some simple facts about the workings of the game. However, for all of that, League of Legends has only been around for a short amount of time. By applying knowledge accumulated by forerunners in other areas, we can draw on a knowledge base many times the size of the existing one pertaining to League of Legends. Today, I will specifically explore a few points on naval strategy, how navies protect high-value units, and how this can be applied to best protect AD carries in League of Legends.

In League of Legends, we have two main types of carries, AP and AD. However, a more useful division may actually be by the nature of the damage these characters deal: burst or sustained. In both cases, the characters have a damage “payload” they must deliver. In the case of sustained damage dealers, that payload is continually dished as long the carry remains alive and in range. Because of the value of keeping these damage dealers alive, as well as the threats that inevitably approach the damage dealers while they remain in range, teams generally have units dedicated to protecting them (often tanks and supports, collectively referred to as “peelers”).

A similar concept exists in naval strategy: the protected ship is classified as a “high-value unit” and also has a certain payload that it wants to deliver. In order to reliably achieved this goal without being destroyed first, the high value unit will bring along “escorts”. These are equivalent to “peelers”.

Australian Royal Navy researcher Mark West had quite a bit to write about optimal strategies and positions for escorts to take after he ran some models of a common situation: a high-value unit approaches a coastal area to deliver its payload. In League of Legends, this would be equivalent to a normally engaged teamfight or skirmish.

West elaborated three types of escort: short ranged frigate with weapons (tanks and other short ranged peelers), long range weapons on an air warfare destroyer (equivalent to a long-range burst character, killing threats before they can reach the carry), and finally radar and other devices to increase situational awareness (wards and other vision). In League of Legends we see a lot of the first class and more or less of the third, depending on rating. Beyond the already known mantra of “wards win games”, however, West’s classification may also indicate that strong offense may be better defense than League players previously thought. The idea of a defensive Ahri, Malzahar, or Veigar seems a bit strange, but the the brief popularity of Veigar and Syndra support may indicate the idea has some merit.

West’s model also showed that in circumstances where multiple threats attacked a high-value unit with multiple escorts, it was best for these escorts to target separate threats rather than both focusing on one at a time. The advantages of divide-and-conquer defenses grow larger when the high-value unit is closer to the threat. This may be less applicable to League of Legends, as in the naval case escorts will be capable of destroying a threat, while many peelers in League will be incapable of killing an incoming attacker.

As far as the positioning of escorts relative to their HVU, the gist of the positioning rules state that the escorts should generally situate themselves behind or alongside the HVU, not in front of them, and always very close by. This is because the payload is being delivered into an enemy, behind which you are unlikely to have vision. By standing behind but nearby, the escort provides the maximum amount of coverage of known areas while remaining in position to defend the high-value unit or itself.

The optimal position for the high-value unit is also important to this setup. West’s research shows two main sweet spots. Damage = efficiency x survival time, in both LoL and naval warfare. By positioning close to the enemy, the HVU can maximize efficiency, but by moving away it can increase its survival time. Because sustained damage dealers have unlimited payload, the value of survival time is inflated for them. Three other factors can also increase the value of distance. As your required delivery time increases (stacking champions like Vayne or Kalista), so does optimal distance from target (called downrange). Additionally, a higher number of threats also increases the optimal downrange, as standing close will likely cause the HVU to be destroyed before it can deliver sufficient payload. Finally, if you are recognized as a major or main threat, you should try to increase downrange. An enemy focused on a more dangerous or pressing target can be approached less cautiously. Below is one of West’s diagrams of probability of survival depending on distance.

As you can see in the picture above, long range HVU’s are more dependent on the power and competency of their escort (teams with better/fed peelers should position their carries further from the enemy).

Now we can move on to how to best move the carries around the map. Robert C. Rubel wrote about modernizing sea control in a 2010 report, touching on high-value units, where they can go, and what they can do. A big part of this was the concept of “water colours”.

Rubel writes about three “colours” of ocean water. Blue waters are the regions where fleets centered on high-value units can safely traverse. Blue water expands as your side gains an advantage. Essentially, blue water represents the safe space for carries, and it grows as your team builds vision dominance and advantages in objectives and gold. When blue water regions expand, they push with them the line of green waters: areas where offensive operations can be undertaken but only by stealthy or mobile units. This territory is passable to and makes great hunting grounds for the likes of a LeBlanc or Zed, or even Twitch. However, it is unsafe for the likes of a Sivir or Varus to venture into these areas, even with some protection. Finally, brown water is an area where all offensive action in non-viable and should be avoided at all costs. All water that is not blue or green is automatically brown.

Above I have made a rough map of the water divisions for the red side team in a fairly even game with all turrets alive. This assumes teams have placed some defensive wards to cover themselves. The advantages conferred by superior vision CANNOT BE OVERSTATED.

In green water areas where the enemy is known to lack vision, Rubel states that high-value units can conduct hit-and-run operations as long as they stay concealed before and after the fact. He also asserts that in a situation where a fight breaks out in a bad position, it is acceptable to sacrifice a high-value unit to inflict even greater damage on the enemy.

The knowledge of many clever people from past and current generations can be applied to League of Legends, and this article represents only a tiny portion of that knowledge. I hope that the information here has been of some use to you, and that we will continue to draw knowledge from other disciplines to improve our understanding of the strategy of League of Legends.