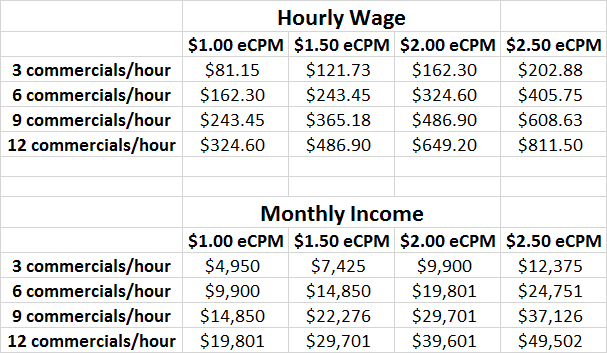 The most common comment I saw after posting the streaming stats for December was “Those numbers are nice, but how much do these people make?” The short answer is that only the players and their accountants know the real answer, but we can make some educated guesses.

We’re going to attempt to estimate Søren “Bjergsen” Bjerg’s earnings from streaming. For those unfamiliar with the League of Legends pro scene, Bjergsen is the mid-laner for Team Solo Mid, the most well known team in the West. He’s from Denmark but competes in America, and he’s one of the top players at his position, giving him immense popularity in both Europe and North America. Normally, if he’s streaming League of Legends, he’s the most watched broadcaster on Twitch.tv. For the month of December, he averaged 27,050 viewers watching him practice, about 9,000 more than the next most popular League streamer.

Like other popular broadcasters on Twitch, there are three primary ways from which Bjergsen makes money via streaming:

Of the three, tips and donations are the most difficult one to measure from stream stats since they’re sporadic and only announced during the stream. Fortunately for this article, Bjergsen does not prominently display those notifications (if at all), so it’s not a major source of income in comparison to others. That lets us focus on the other two sources.

Like most public video sites, Twitch gets a large percentage (if not a majority) of its revenue from advertising, and it shares that revenue with its content producers. Video ad placements are purchased by advertisers on a cost per impression basis, although this is usually shortened to CPM (cost per thousand impressions, where M represents the Roman numeral for 1,000) to make it easier to express the numbers. Broadcasters are then paid based how many impressions they generate.

Unfortunately for the broadcaster, one viewer does not always equal one ad impression. Twitch’s COO Kevin Lin explained why in great detail in a 2012 post on /r/starcraft, but the short version is that some ads are only displayed to certain regions, certain devices, or on certain time schedules. Therefore, a European tablet user may not see any ads while an American desktop viewer may see a block six, or vice versa.

An even greater influence on those numbers is the prevalence of ad blockers. Some estimates put ad blocking rates at 10% internet wide, while others have released surveys where 80-90% of Twitch users block all ads on the site. A Twitch representative estimated that number to be 60-80% for its users.

For those reasons, Twitch will often reference its payouts in the terms of Effective CPM (eCPM), taking the number of ineligible viewers into account to produce a “real” CPM. For example, if one streamer had 1,000 viewers and 100% saw an ad that paid $2.00 CPM while another had 2,000 viewers but only 50% saw the same ad, they would both have earned $2.00. The first would have an eCPM of $2.00 while the second would only have a $1.00 eCPM. Twitch has also used this metric to compare itself to other streaming sites which may offer higher CPMs but may have different fill rates.

Early in Twitch’s history, ad revenue was split with the broadcaster 50/50, although that number has not been publicly verified since then. Part of the Twitch partner agreement is that each streamer is not allowed to disclose their advertising rates, so they are mum on the numbers as well. However, a Twitch representative recently said that the starting rate for new partners is a $3.50 CPM, which would put the starting eCPM at $0.70 to $1.40 if those 60-80% ad block numbers are correct. This is in the same ballpark to the $1.85 eCPM published by Joshua “FXOBoSs” Dentrinos, former owner of the FXOpen StarCraft 2 team.

Because these numbers are negotiable based on popularity and longevity, we don’t have a definitive number, but we can still estimate by looking at a range of reasonable eCPMs. For Bjergsen, we’ll use numbers between $1.00 and $2.50 since it’s almost guaranteed he has a better agreement than the beginner Twitch partner.

And while it’s impossible to tell who is running a commercial and when from Twitch’s API, we can make an educated guess there as well. My experience in watching Bjergsen stream is that he will show a three minute block of ads (6 commercials) after each game while sometimes running more during the loading screen if there’s a long queue. Assuming an average of 30 minutes per game, that would put an upper limit at 12 commercials per hour, and I’ve assumed a minimum of 3 per hour.

The dollar amounts in the graph are based on Bjergsen’s average stream viewership of 27,050 and his 60.95 hours of stream time in December.

Given all the combinations, it’s a wide range of possibilities that could land him anywhere between $5,000 and $50,000 in ad revenue for December. Realistically, it’s reasonable to expect an eCPM between $1.50 and $2.00 for Bjergsen given his popularity combined with TSM’s negotiating ability. And my anecdotal experience would pin the average number of commercials per hour between 6 and 9, narrowing it down to a $15,000 to $30,000 range. Needless to say, that’s a lot of money, but it’s not the only source of Twitch money.

Wanting to offer an alternative source of income for itself and its broadcasters, Twitch began offering monthly subscriptions to partnered broadcasters in 2011. Viewers could pay $4.99 per month to support the streamer, skip ads on the channel, and gain access to cosmetic changes like emoticons and an icon next to their name in the channel chat. While Twitch later moved the ability to skip ads to Twitch Turbo (an $8.99/month subscription to Twitch itself), subscriptions are still a popular way of supporting the broadcaster. And broadcasters love it, because monthly recurring revenue is always the best revenue.

What’s not public though is how many subscribers each streamer has. Most have some sort of alert that pops up on screen when a new subscriber joins, but there’s no easy way to analyze how many happen per day, or what the attrition rate is each month. The best we can work with is what broadcasters have publicly said.

In an Autumn 2014 stream, Nightblue3 mentioned that he had 2,500 subscribers at the time, and his viewer counts haven’t changed substantially since then (at least anecdotally, I wasn’t recording those numbers then). For December 2014, he averaged 15,156 viewers, just over half Bjergsen’s average viewer count. It’s possible that Nightblue has a higher subscription rate than Bjergsen or vice versa, but without knowing, I’ll assume that Bjergsen’s subscription numbers are comparable to Nightblue’s, plus or minus 1,000. Here are the revenue estimates for both 50% and 60% subscription shares:

Combined, that would bring Bjergsen’s monthly Twitch earnings to somewhere between $20,000 and $40,000 per month. That’s an amazing amount of money for anyone, especially an 18 year old pro gamer. It was only four years ago that the Starcraft 2 community was blown away when Destiny made $3,500 from streaming in a month, so it’s a huge achievement for both Bjergsen and Twitch to reach this level of success.

(P.S. If you want to look at the data yourself, you can find all Bjergsen’s stream data for December here.)