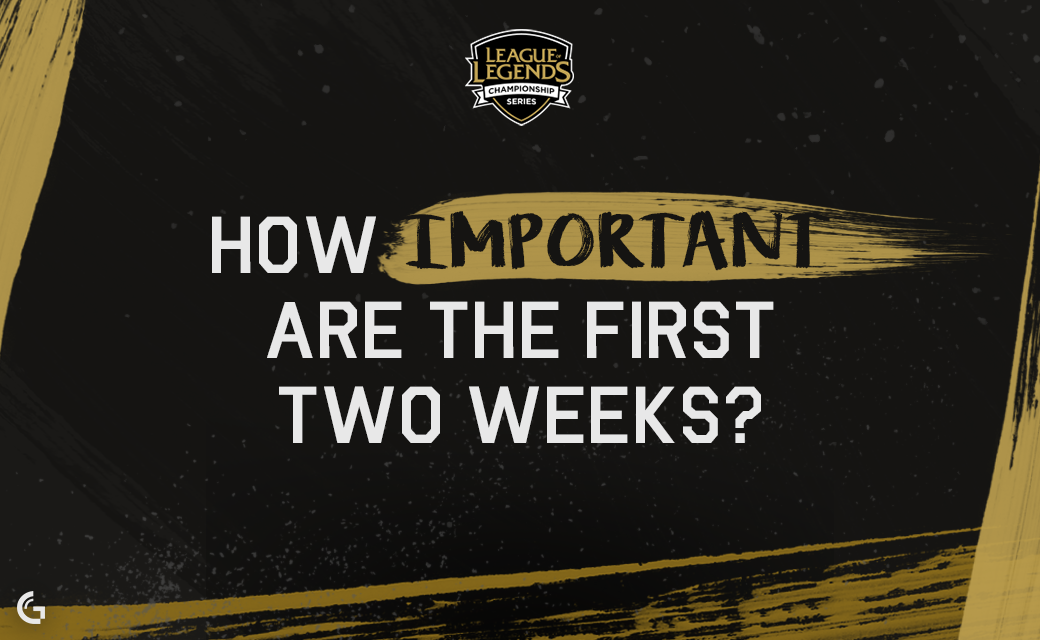 Riot’s North American League Championship Series has concluded its first two weeks of play. The fan favorite Team SoloMid sits atop the standings at 4-0, with newcomers Team EnVyUs one game behind in second. Meanwhile, Echo Fox and Team Liquid are tied for seventh, with Spring Split champions Counter Logic Gaming leading only Phoenix1, who find themselves at the bottom of the board. Will the top teams continue through the season in this form, or will the bottom teams get all their gears moving at the same speed? Let’s see historically what the first two weeks of an NA LCS split have taught us about the final outcome of the league.

CLG topped the leaderboard after the first two weeks of the 2015 North American Spring Split, and they would later finish the split in third. The biggest losers that split were both teams who found themselves in the top five after two weeks; Gravity, who started in second and dropped to fifth, and Team 8 who started fourth and finished in seventh. In addition to that, Team 8 was the only initial top five team to not finish there.

Their spot in the upper half was taken by Cloud9, who, after a less than ideal start to the split, managed to jump six places from eighth to second. That made C9 the only team to start in the bottom and not finish there. Winterfox, Team Dignitas, and Team Coast finished eight, nine, and ten, after starting seventh, tenth, and ninth respectively. So, the 2015 Spring Split did not see many changes, and the 2015 Summer Split ensured history would not repeat itself this time.

The 2015 Summer Split began in a very similar manner, with CLG leading Gravity at the top of the standings, and Cloud9 struggling to find pace with the rest of the top contenders, though the season proved to be an eventful one and finished nothing like it started. Four of the five teams to start in the top five finished either below or equal to where they started, with the only outlier being Team Liquid, who started fourth and finished the split as regular season champions.

Meanwhile, the bottom five teams were able to find their strides with three of them finishing in places above where they started; Team Impulse moving from seventh to third, Cloud9 going from eighth to seventh, and Team 8 jumping one spot and ending their split in eighth place. Team Dragon Knights, who began the split at the bottom, ended their split at the bottom, unlike Dignitas who managed a one spot gain in the 2015 Spring Split.

If we turn our attention to the bottom half of the board, and eliminate the outlier of Cloud9 who gained six places all on their own, bottom half teams after two weeks in the 2015 Spring Split gained just one position, which came from Team Dignitas who swapped positions with Team Coast and finished ninth. Meanwhile, the bottom half teams of the Summer Split performed much better, as Team Impulse, Cloud9, and Team 8 all jumped in the standings, gaining a combined total of six spots.

If you are a fan of either Team SoloMid or Team EnVyUs, you probably like what you have seen from your team thus far. If you look at the past, top teams have fallen in the standings, but whether that can be accredited to the fact that there is nowhere to go but down, or getting comfortable is a different story. One thing is for sure, top teams have stumbled but rarely do they fall.

If you are a fan of Team Liquid or Counter Logic Gaming, who sit tied for seventh and ninth respectively, then you are probably, with good reason, not too confident in your team. Though Cloud9 in 2015 pulled all the way from eighth to to second, and Team Impulse went from seventh to third. History says it’s possible; the lock is there, but the question is does either team have the key?

How much of an impact do the first two weeks of a split have on the final outcome for a team’s season long performance? Let us know by commenting below or tweeting us @GAMURScom.

All of the stats and information included in this piece were provided by lol.esportswikis.com.