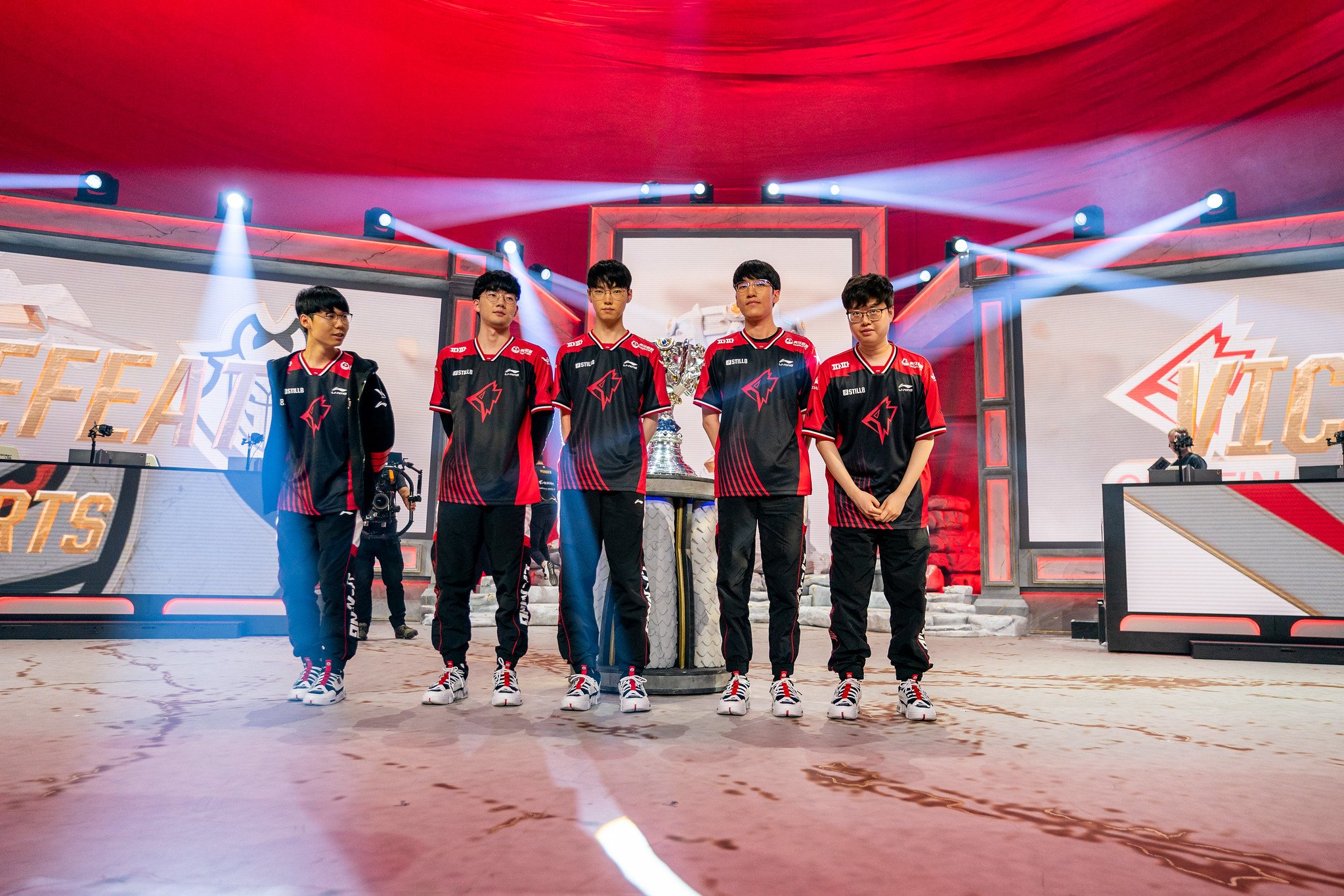 Something extraordinary happened to Griffin during the first week of the Worlds main event. The darlings of the LCK who stormed onto the region’s stage last summer and took down heavyweight after heavyweight were in some dire straits.

But instead of folding, the team that had never won a pressure-packed best-of-five managed to tie G2 Esports atop Group A. Then, with everything on the line, they took down the MSI champions in a tiebreaker to earn the first seed coming out of the group.

The team that had fallen short in so many situations had finally come through, and on the biggest stage to boot. Sound familiar? That’s exactly what Invictus Gaming did at Worlds last year.

IG were able to carry the momentum of their first big series win all the way to the championship. This year, Griffin will look to do the same thing. The only problem is they have to go through IG first to do it.

Korean League of Legends isn’t typically known for its off-stage drama, especially when it’s not financial. The teams—especially the best ones—are too conservative and inwardly focused. The extracurriculars are usually best left to the other regions. Even kt, whose team name is literally the amalgamation of the English words roller coaster, is usually only a wild ride on Summoner’s Rift.

That made what happened to Griffin over the last few weeks so odd. At first, their inability to win a best-of-five seemed to be due to inexperience. But repeated misses after strong regular season performances rankled both managers and players, leading to the dismissal of head coach Kim “cvMax” Dae-ho just days before Worlds.

We had no idea what to expect from this squad at Worlds. The first few games were shaky—they lost to G2, and even in wins, they didn’t look like the team that shocked Korea last summer. What once seemed like the next generation of Korean League now appeared second-rate to even the Europeans.

But then, like they have the whole way, Griffin surprised us. Top laner Choi “Sword” Sung-won, who was benched by cvMax down the stretch of the Summer Split, put in fantastic performances on Akali, a mechanically intensive champion he’d previously shown little affinity for. And ADC Park “Viper” Do-hyeon, normally one of the weaker links, poured in a deathless 9/0/6 scoreline on Xayah in the tiebreaker vs. G2.

Somehow, this Griffin have survived inner turmoil. They’ve evolved to become even better than they looked in the LCK. And for inspiration in terms of how far that could take them, all they have to do is look at the team they’ll play in the quarterfinals.

IG know what it’s like to discover something new about yourself midway through a tournament. Last year, the notable players on their team included star mid laner Song “Rookie” Eui-jin and heralded young ADC Yu “JackeyLove” Wen-bo.

But it was two other players who really carried the team further than they were supposed to go. Top laner Kang “TheShy” Seung-lok wasn’t even the full-time starter for IG—they had Lee “Duke” Ho-jin, a former world champion with SK Telecom T1, waiting in the wings.

But TheShy seemed hellbent on making Worlds his personal highlight reel. He got a lot of help: Rookie roamed early and often to his lane. And jungler Liu “Ning” Zhen-ning—again not one of the best at his position, even regionally—pitched in as well.

It’s hard to overstate how dominant TheShy was at Worlds last year. No words can adequately describe the tournament he had. His numbers were simply ludicrous. Take, for instance, the over 600 damage he did per minute. Only one other top laner was even over 500, and that was Fnatic’s Gabriël “Bwipo” Rau, a player that TheShy thoroughly eviscerated in the first two games of the final. Fnatic couldn’t even think about tossing Bwipo out for a third game, opting instead to put in veteran Paul “sOAZ” Boyer. They might as well have waved a white flag.

As good as Griffin are playing now—and they’re the higher seed in this match—TheShy is the primary reason they could fail again. After a summer spent rediscovering themselves, IG are back in form again. And as good as he’s been the last few games, Sword has never in his career faced someone like TheShy at his peak.

That’s the path that TheShy and IG went down last year to go from no titles to world champs. Griffin will try to emulate that by first beating IG in the quarterfinals. The match between the two kicks off on Oct. 26 at 5am CT. Last year, IG’s first match was basically the final. It’s not impossible for that to be the case again.