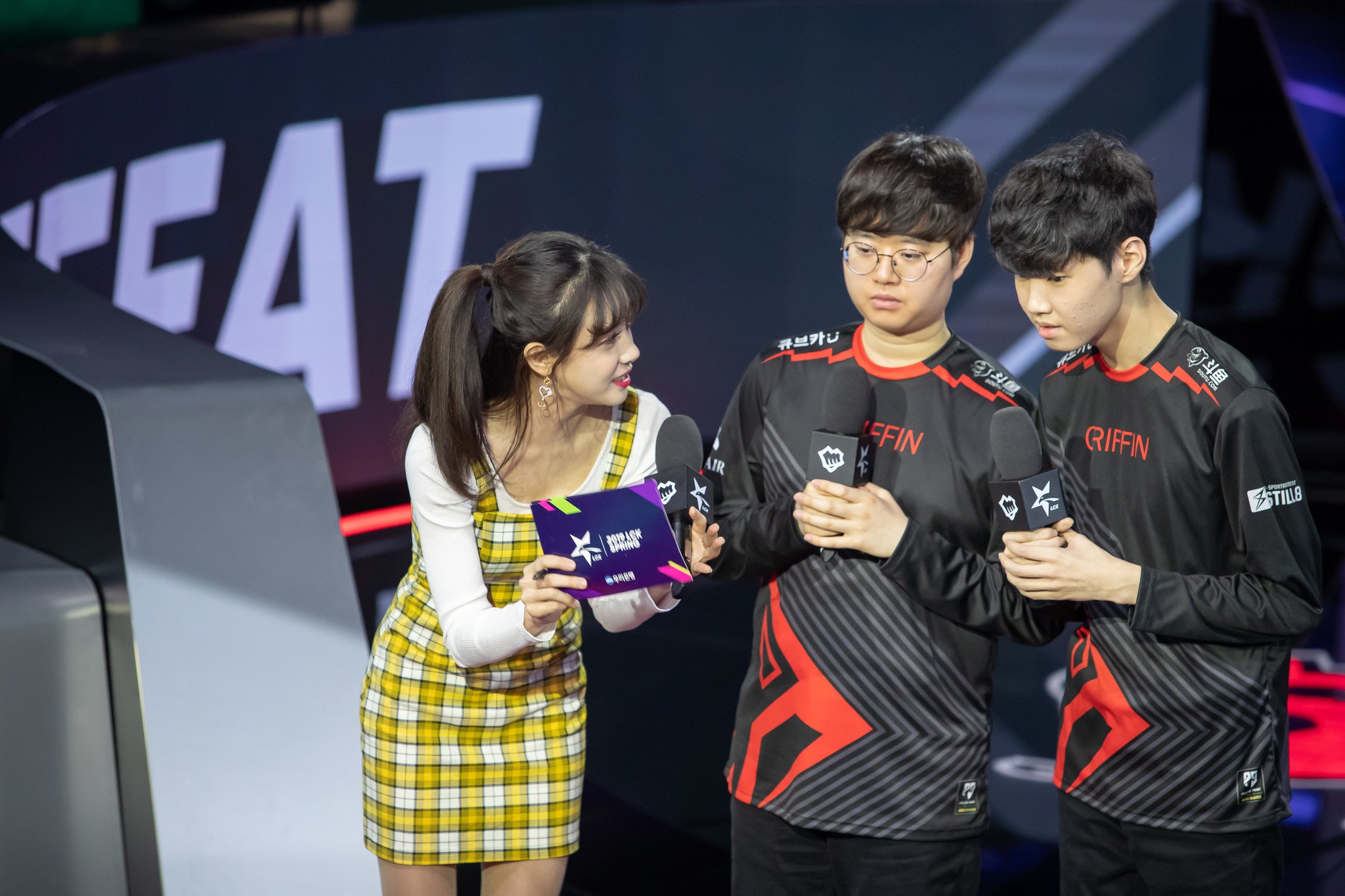 After shattering Jin Air Green Wings’ Nexus for the second time on March 31, Griffin closed out the spring regular season with their 13th series sweep of 2019.

Griffin top laner Choi “Sword” Sung-won and mid laner Jeong “Chovy” Ji-hoon, who both received MVP accolades, were standing center stage alongside LCK announcer Kim Min-ah for the post-match interview. Chovy secured his place as league MVP with his performance in game two, though unaware that he’d won the award until his teammates excitedly told him.

Despite Chovy’s MVP title and Griffin’s extraordinary 15-3 regular season record, the team entered their two week pre-playoff hiatus leaving fans with a lingering sense of uncertainty. Eight months ago, Griffin were in a near-identical position. In their inaugural LCK split, Griffin qualified for playoffs as the second seed under KT Rolster, sporting a 13-5 regular season record, matching first-place KT.

The similarities between Griffin’s current and previous regular split performances don’t end with a simple match record, but also the team’s trajectory throughout the regular season. Griffin started both the previous and current split blazing hot, cultivating huge win streaks.

But come the second half of both splits, Griffin cooled off, losing matches to teams both at the top and bottom of the standings. Griffin’s subtle loss of steam last summer culminated in two crucial losses in both the LCK final and World Championship regional qualifier. These losses prevented Griffin from doing what most had thought would be a given—competing for the Summoner’s Cup at the World Championship.

“To be honest, all that is left is regrets,” Griffin support Son “Lehends” Si-woo said when describing the 2018 season during the team’s workshop in Phuket, Thailand. “The emotions that I felt when I lost comes out in my dreams sometimes, and whenever that happens it’s really hard for me.”

Such feelings weren’t unique to Lehends, but the entirety of Griffin, who expressed similar sentiments in their personal interviews.

“But if I had to pick one event, it would the games when I lost with Irelia,” Chovy said when asked about his most memorable event of 2018. “Despite me picking Irelia, I played too defensive and couldn’t show my full potential.” Chovy played Irelia three times across the LCK finals and their regional qualifier match, with all games resulting in losses—losses that contributed to souring what was otherwise a phenomenal professional debut.

One split later and with a tournament win under their belts in the KeSPA Cup, Griffin are now one best-of-five victory away from overwriting those regretful memories with the cheers of fans throughout Seoul’s Jamsil Arena as they lift the LCK trophy.

Awaiting Griffin on the other side of that best-of-five is the most storied and revered team in League of Legends history: SK Telecom T1. Flush with six domestic titles, two Mid-Season Invitational wins, and three World Championship victories, SKT are the epitome of winning—and the organization’s recent roster rebuild was focused on signing players with a similar pedigree.

On the top side of Summoner’s Rift is SKT top laner Kim “Khan” Dong-ha, an MSI finalist and the winner of two LCK titles. In the bottom half of the map, SKT field the greatest support to ever play the game, Cho “Mata” Se-hyeong, who holds two LCK titles, an LPL title, and was the 2014 World Championship MVP. And in the mid lane for SKT is the only player in the world with a better resume than Mata, Lee “Faker” Sang-hyeok, who’s led SKT since the organization first entered League in 2013.

SKT’s roster is filled with playoff-tested veterans who’ve proven they don’t break under pressure—something that can’t be said about Griffin’s players yet.

“I hate to bring last year up,” SKT head coach Kim “kkOma” Jeong-gyun said in the LCK finals press conference, as translated by Korizon. “However, Griffin seemed to fail at ‘closing things’ up at last year’s finals. Issues with mental fortitude, let’s say. I think it will be ‘interesting’ if the same thing happens for the finals this year. I doubt it will be a 3-0. It will be interesting if this year’s finals is a repeat of last year’s one.”

“It’s not a matter of the team were going to be facing [in the finals], it’s us maintaining our playstyle,” Sword said in that same MVP interview after beating Jin Air.

Rather than change how they play when things go wrong, a mistake coach Kim “cvMax” Dae-ho admitted he made last split during the pre-finals press conference, Griffin’s focus is now staying true to themselves and their playstyle. This playstyle has not only brought Griffin success against SKT, who they’ve never lost to, but also throughout the entirety of the LCK in the spring thus far.

“I am curious about the time when our development can be felt,” Griffin AD carry Park “Viper” Do-hyeon said prior to the 2019 season. “Whether we overcome the [2018] loss well or not.”

Viper will have his curiosity answered in this weekend’s LCK final. Griffin will face SKT on Saturday, April 13 at 3am CT.