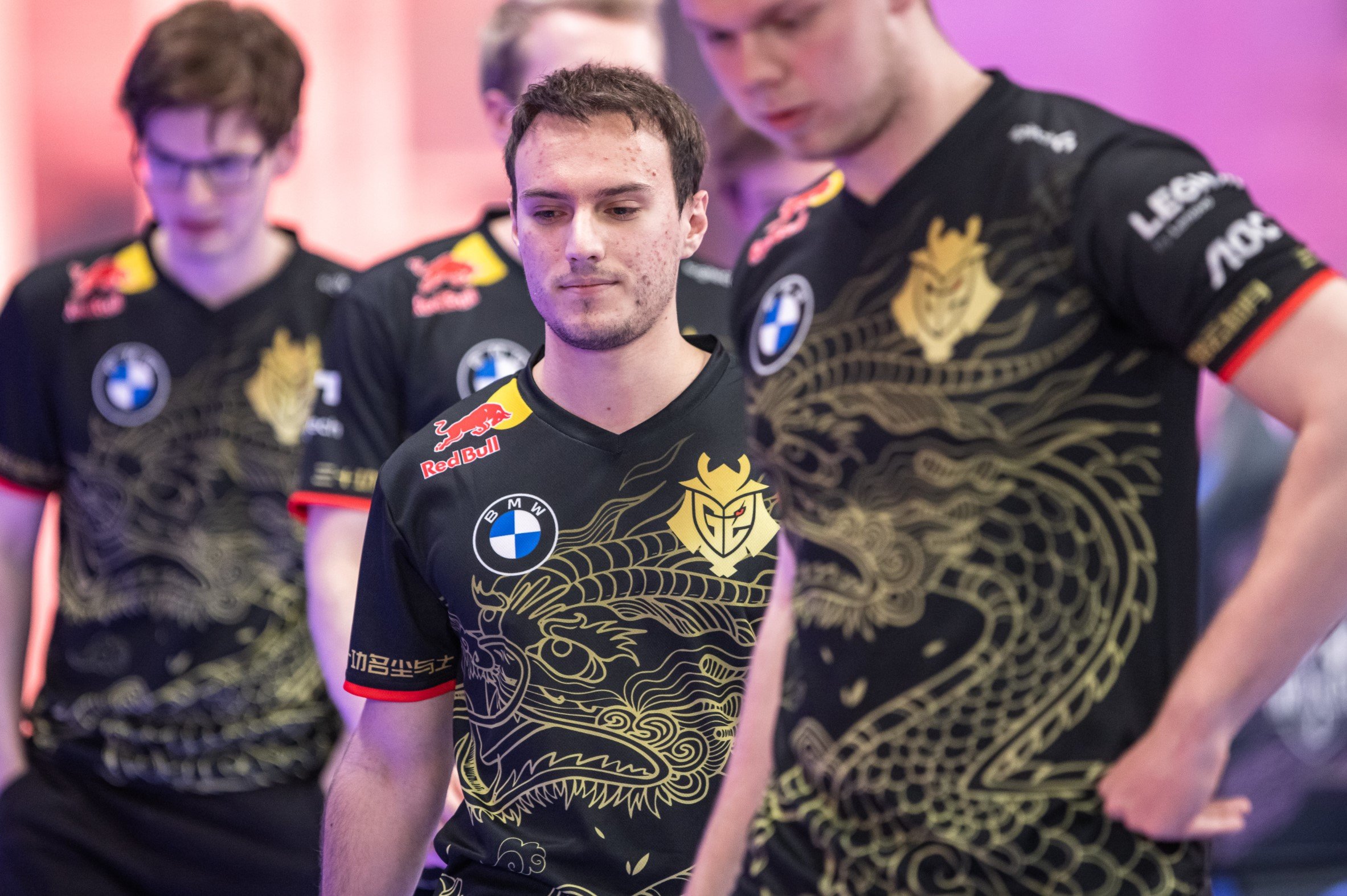 The semifinals of the 2020 League of Legends World Championship are set to begin this weekend with a do-or-die matchup between G2 Esports and DAMWON Gaming.

The two teams met at last year’s World Championship, where G2 throttled DWG in convincing 3-1 fashion during the quarterfinals. Now, almost precisely 365 days later, the two teams will meet again with nearly identical rosters to the ones they fielded for last year’s contest.

Between 2019 and 2020, only one roster move was made by either team. DWG replaced its former AD carry Nuclear with Ghost, a career journeyman who’s found a home for himself in the DWG bot lane. Apart from Ghost, however, the rosters are precisely similar across the board. Players like ShowMaker and Caps will have the chance to improve upon their performances in their respective matchups when compared to last season’s match.

And if history is any indicator, G2 could hold a slight advantage. But 2020 DWG is an entirely different beast than 2019 DWG. The team is more polished, more intense, and plays with a sense of agency that’s been honed in and perfected over the course of the last year.

If nothing else, this weekend’s rematch between the best squads from the LEC and LCK should serve as a true indicator of strength and potential at this year’s World Championship. And as both teams come charging into this best-of-five off the heels of quarterfinal sweeps, factors of momentum and adrenaline will be on full display in what’s set up to be the “match of the tournament” thus far.

G2 and closing the book on the LCK

Worlds 2020 presents a unique opportunity for G2 to capitalize on all of the pent up potential that the organization has been accruing for the better part of the last three years. After reaching the semifinals in 2018 and appearing in the grand finals of last year’s tournament, it would only make sense for G2 to finally seal the deal on a multi-year run to the top of the professional League scene with a Worlds title of its own.

And frankly, the road to the grand finals shouldn’t be all too daunting for a G2 team that’s already rolled over Gen.G and proved itself against nearly this exact DWG roster on the Worlds stage last year. The squad—one that’s stayed mostly intact and only gotten better throughout the team’s three-year run toward the top of the world—is playing at a peak performance level. After breezing through the pro scene in 2019, G2 look even stronger in 2020.

Best of all, the stars have aligned to put G2 on pace for a repeat performance down the stretch of this year’s World Championship. The team made quick work of one LCK opponent in the quarterfinals and it’s poised to do so again in the semis—just like they did at last year’s tournament.

Since the start of 2019, G2 have found unparalleled success against teams representing the LCK on the international stage. With a record of 15-6 against Korean teams over the last two years, G2 have proven that they can stand head and shoulders above the most storied region in League history. If the LEC champions are to earn a shot at redemption and finally bring home the Summoner’s Cup, they’ll have to close the book on the region that they’ve been able to get the better of for so long with one final victory on the Worlds stage.

For DAMWON, a chance at greatness

DWG, however, is a bit different than most LCK teams, to say the least. When analyzing the region as a whole, DWG stick out from the crowd in an intense manner. Any team that’s even dared to come for DWG’s crown has been struck down in emphatic fashion. Only JD Gaming has taken a single game off of the Korean juggernaut in the past three months.

Coming into this weekend’s matchup against G2, DWG have won 45 of their last 51 games. To say the team is on a “hot streak” would be a massive understatement—potentially even an insult. This run that DWG have put together throughout the entire back end of the 2020 season is a stretch of dominance that many teams can only dream of.

In a regional sense, the second-best team from the LCK, DRX, was completely manhandled by DWG twice in the span of the past month alone on both the domestic and international stages. DWG are the best team from Korea at this year’s tournament and they might just be the best team to represent the region at Worlds in years.

With that in mind, it’s unfair to say that DWG is a just representation of the levels of talent and potential found in the current landscape of the LCK. This DWG roster represents something greater than itself. They might be the best team from Korea since the 2015 iteration of SK Telecom T1—a team that went all the way to the top with a tournament record of 15-1. DWG, and their current record of 8-1 at Worlds, could match the greatest performance in the history of Korean League if the team keeps progressing through the tournament at its current pace.

With dominant wins across the board and an endless supply of momentum to boot, there’s no reason to believe that DWG shouldn’t join the LCK Hall of Fame with a win at this year’s World Championship. They’ve certainly proven that they have the talent and potential to do so. The only thing standing in DWG’s way right now is the team that knocked them out of Worlds last year. Momentum, talent, and potential can only take a group of players so far when history is staring back at them.

A regional rivalry on display

But this weekend’s best-of-five against G2 should serve as a chance for the LCK champions to completely rewrite history and change the drastic path the professional scene’s narratives are taking. For years, Korea had been consistently ranked above Europe on the international stage. A handful of dominant performances from G2 over the course of the last few years has put that concept on the back burner, though, relegating the LCK to a position where it’s viewed side-by-side with the LEC.

DWG are presented with a unique opportunity to silence the noise regarding that prospect and completely reinvigorate the conversation surrounding Korean League. The LCK hasn’t been able to capture the Summoner’s Cup in two full years. And for Korea, those two seasons have felt like a lifetime when viewed in the context of the region’s five-year win streak at the World Championship.

If DWG bring Korea back to the pinnacle of the game after back-to-back years of EU vs. China in the grand finals, the narrative that’s been nagging at the region for years could finally be put to bed.

But they’ll be faced up against the best team to ever emerge out of Europe. For the better part of the last two years, the LEC has been surging to the top of the professional scene, leaving Korea in the rear-view mirror. Now, with 2020 potentially serving as the pinnacle of a long run for the region, G2 has one goal in mind: to finish what it started and bring home Europe’s first Worlds title in nearly a decade.

Matchup to watch: Caps vs. ShowMaker

Mid laners have excelled more so than players in any other role throughout this year’s World Championship. And no two players have put on a stronger display over the last two weeks than Caps and ShowMaker. Both players have been having the performances of their lifetimes at Worlds 2020, setting up G2 and DWG for success at every corner.

If the tournament were to end today, ShowMaker and Caps would both be in the discussion for Worlds 2020 MVP since their respective performances throughout their teams’ first nine games have been extremely impressive. Both players rank among the top 10 qualified players at Worlds when it comes to KDA, CSM, and GPM, according to League stats website gol.gg.

When analyzing most statistical categories, ShowMaker and Caps lead the way across the board. With a KDA of 8.5 across nine games (eight of which have been DWG wins), ShowMaker is having the best tournament performance of his career thus far. Caps and his 609 DPM easily tops every other mid laner at Worlds. Case in point, these two players are statistical anomalies who stand far above the rest of their contemporaries. The fact that they’ll be facing off head-to-head represents a sincere clash of narrative and arithmetical greatness.

Last year at this time, both players had been performing relatively well at Worlds 2019 prior to their quarterfinal matchup, but the circumstance was nothing like this. This year, Caps and ShowMaker have been leading their respective rosters through the World Championship, while simultaneously putting on a clinic for the rest of the world to see.

G2 and DWG have been carried to where they are now by the performances of their mid laners. If a winner is going to be determined through the fate of any one player in this upcoming best-of-five, it’s going to be whoever gets the edge in the matchup of household names between Caps and ShowMaker.

G2 might just serve as the natural kryptonite for LCK teams, but DWG are leagues above the LCK as a whole. The Korean goliath is in a league of its own—a league of larger-than-life teams that shouldn’t be comparable to DWG’s region-mates.

Don’t compare this team to the rest of the LCK. Instead, speak on this DWG roster in the same breath you would international sensations. Teams like 2019 FunPlus Phoenix, 2018 Invictus Gaming, and even the aforementioned 2015 SKT team would be much more appropriate comparisons to make.

While DWG should be, in theory, a stepping stone on the road to a G2 finals appearance, it’s unfair to say that this year’s DWG roster plays like any of the LCK teams that G2 have simply dominated over the last two years. While history could lead you to believe that G2 have the upper hand because their opponent hails from Korea, it wouldn’t be wise to count DWG out simply because the team’s region-mates performed poorly against the LEC champions.

And frankly, the fact that both teams find themselves as the lone representatives of their regions at this stage in the tournament should showcase the concept that the hopes of the LEC and LCK fall on the shoulders of G2 and DWG, respectively. No other team from Europe or Korea could do what these two squads did: reach the final four of the World Championship. And frankly, that’s for good reason. G2 and DWG are far and away the strongest teams to emerge from their regions. But even on the international stage, they’ve proven that they’re worthy of carrying the banner and potentially bringing home a title.

Whichever team comes out on top could end up being the favorite heading into next weekend’s grand final. With parallels of utter dominance on both the regional and international stages over the course of the last few months, as well as an influx of unmatched momentum for both squads, it’s fair to say that right now, G2 and DWG look like the strongest teams at Worlds 2020 overall. They’ve both easily blown through the tournament as a whole so far—something teams like Top Esports and Suning on the other side of the bracket can’t say. Regardless of who wins this matchup, they’ll be poised to give either of those LPL teams one tough ride in the grand finals.

It’s rare for a team to bring narrative elements of momentum, history, redemption, talent, and potential to the table during any series—in any sport for that matter. The fact that both G2 and DWG will be bringing all of those foundational concepts and more to the Rift this weekend should reinforce the belief that we’re about to witness an absolute classic.