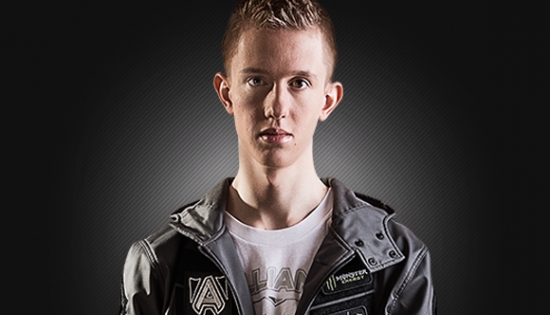 Following his teams disappointing result during the summer play-offs Froggen came into the 2014 season knowing that change needed to happen. While it was rumoured Froggen would be making a team with the likes of Jwaow, Edward and Freeze this plan did not come to fruition. The final roster of Froggen’s super team would end up being Wickd, Shook, Tabzz and Nyph. This team would see their first competition at the Battle Of The Atlantic where they would take a 2-0 series against Dignitas and show the world the potential that surrounded the all star roster.

Alliance looked incredibly strong coming into the 2014 spring split and with all the pieces in place were ready to achieve what Froggen had been dreaming of his entire career. The first week of the spring split had Alliance up against Copenhagen wolves, Fnatic, Super hot crew and ROCCAT. All of these games showed Alliance underperforming and losing to all four of these teams even though three of them were at the time considered bottom of the barrel teams. Following this disappointing first week Froggen set out to improve his team so that they could take their raw mechanical skill and use it in combination with excellent shot calling and teamwork to become one of the best teams Europe had ever seen. Although starting off rocky Alliance managed to improve their performance and by the end of the split had secured themselves third place with a 16-12 record and looked primed and ready to take on the spring play-offs. Alliance’s first match in the play-offs would be against the Copenhagen Wolves, a team that throughout the split were one of the only teams to have a losing record to Alliance. With this advantage it seemed Alliance would take the victory off CW with great ease. The first game of the series would have Froggen playing Ziggs against Cowtard’s Yasuo. Following a disappointing 0-4-4 performance from Froggen CW would take the first game and a 1-0 lead in the series. Coming into game two Alliance needed to pull out a win and so we saw Froggen defaulting back onto an old pick by playing Karthus against Cowtard’s Lulu. Despite a disappointing early game Alliance managed to utilise the Karthus pick to win late game team fights and take objectives easily. This allowed them pull out a victory to tie the series up 1-1. The third game of the series had Froggen sticking to the Karthus pick this time he was up against Cowtard’s Ziggs. Again Alliance showed that weak early game against CW but just like the previous game Froggen’s ability on Karthus allowed them to dominate the late game fights and secure the win to take the series 2-1. This win propelled Alliance into the semifinals where they would meet Fnatic. The first game of this series had Froggen again picking this Karthus into xPeke’s Kayle. Despite Froggen’s best efforts and impressive laning phase this Kayle pick proved to be the counter to the late-game hyper carry that was Karthus and so Fnatic took game one of the series. Game two of this series had Froggen on Ziggs up against xPeke on Zed. Following an amazing 9-1-6 game Froggen managed to carry Alliance and tie up the series 1-1. The third and final game of the series saw Froggen picking Fizz, a pick that he seemed to default onto when things were looking down and he needed to pull a win out much like the previous split when EG lost to Fnatic. Despite having a good laning phase and constantly staying ahead of xPeke in CS the rest of Alliance just couldn’t follow suit with Froggen and sadly the game ended quickly in 24 minutes with Fnatic taking the series 2-1. This defeat sent Alliance into the third place match against Team ROCCAT. The first game of this series was abysmal for Alliance with everyone except for Froggen performing extremely poorly. The second game it looked like this disappointing first game had got to Froggen as well as he showed a very poor 2-6-0 Fizz performance and dropped Alliance into fourth place for the split.

Coming into the summer split Alliance had to improve if they wanted to stand any chance at making it to worlds. This improvement was instantly apparent as Alliance came into the summer split with a 3-1 following an impressive first week where they only dropped one game to Super Hot Crew. The summer split just kept getting better and better as Alliance seemed like they were unbeatable maintaining a first place lead throughout the entire split. Coming into the summer play-offs it looked like Froggen was one step closer to his dream of winning worlds. With their bye into the semifinals Alliance only had to win one best of 5 series to secure their place at worlds. This series would be against SK Gaming a team that had always seemed to be right behind Alliance in terms of mechanical skill and would always give them a run for their money using advanced strategy and map rotations. The first game of this series would have Froggen playing Ahri against Jesiz’s Ziggs. After an astounding laning phase and perfect team fighting Froggen managed to use this Ahri pick to secure Alliance a 1-0 lead in the series and bring them one step closer to worlds. Game two had Froggen playing Xerath against Jesiz’s Ahri, picking this immobile mage into the highly mobile assassin quickly proved to be a mistake as Froggen had a disappointing performance on Xerath and SK used this advantage to take the second game and tie the series up 1-1. After this poor performance in game two Froggen learnt his lesson and picked Ahri in game three. Again Froggen used this Ahri pick to bring his team a convincing victory and pull Alliance ahead in the series with a 2-1 lead. The final game of the series saw Froggen pulling an interesting pocket pick by playing AD Tristana mid against Jesiz’s Kassadin. This Tristana pick showed that Froggen was more than just a mage and assassin player as he showcased his mechanical ability and carried Alliance to the 3-1 win and secured them a spot in the finals against Fnatic. Coming into the final against Fnatic it looked like nothing could stop Alliance while Froggen was on the top of his game and he was ready to show why he was the best mid laner in Europe and the best player in the west. Froggen played Fizz in the first game of the series against xPeke’s Twisted Fate, with this Fizz pick he out laned, out roamed and out team-fought xPeke throughout the entire game to get Alliance a 1-0 lead in the series. Game two of the series had Froggen pulling out his pocket Tristana pick again against the legendary xPeke’s Kassadin. Froggen quickly demolished xPeke and again brought his team a convincing victory to bring Alliance to a solid 2-0 lead. The third game saw Froggen pulling out a popular Korean pick with mid lane Zilean. With this pick he showed an impressive laning phase against Peke’s Orianna but despite his best efforts could not carry the game as Tabzz and Nyph showed a very poor performance in bottom lane. The final game of the series had Froggen once again pulling out Xerath but this time it wasn’t against an extremely mobile assassin that could pressure him in lane. This time it was against Peke’s Ziggs and with this practically free laning phase Froggen managed to farm up and carry his team to victory with an impressive 5-0-6 score. With this 3-1 victory over Fnatic Froggen had finally cemented himself as being a part of the best team in Europe and had secured himself a spot at the 2014 world championship.

The 2014 world championship was quite an upset for Alliance, with their bot lane underperforming almost every game, Wickd’s shallow champion pool being abused and Shooks inconsistency being more prevalent than ever. Alliance sadly got eliminated during the group stage after disappointing games against Brazilian team Kabum and North American team Cloud9. Despite this disappointing showing at worlds Froggen still lead Alliance to be the best. Two months after worlds Alliance would compete in IEM San Jose where they would face Cloud9 again but this time in a best of 3. The first game of the series saw Froggen playing Xerath against Hai’s Fizz. Once again picking this Xerath into a highly mobile assassin proved to be a huge mistake as Froggen pulls a very disappointing 3-6-1 score and Alliance drop game one to Cloud9. The second game of this series had Hai picking Fizz again but this time Froggen responded with a Lissandra pick. This Lissandra pick proved to be effective as it gave Alliance huge team fight ability and allowed them to tie the series up 1-1. the final game of the series had Froggen once again picking Xerath and once again having a disappointing showing as he failed to impress against Hai’s Orianna as Alliance dropped the series 2-1 to Cloud9. After this disappointing performance at IEM San Jose Froggen will have to improve as he comes into the 2015 spring split against a revamped European scene with almost every team gaining new and improved players.

Froggen has been a top mid laner since the beginning of 2012, this consistency and ability to keep himself at the top of the competition has allowed him to strive in the competitive league of legends scene. Having surpassed many legends such as Alex Ich, Misaya and Toyz it is clear that Froggen is without a doubt one of if not the greatest mid laner to ever compete in the league of legends scene. With countless tournament wins and amazing performances against the top competitors in the world it is undeniable to say that Froggen is a true E-sports prodigy.