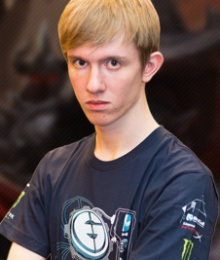 Following his success in the 2012 summer OGN split Froggen proceeded to qualify for the 2012 world championship by beating Fnatic at the European regional qualifier. Although they only placed third at the qualifier and lost to SK gaming in a disappointing 0-2 CLG.EU looked primed and ready to take the 2012 world championship by storm. Since they only came third at the qualifier CLG.EU had to play through a group stage to get into the knockout round of the tournament, joining them in their group would be North America’s Team Dignitas, South Korea’s Najin Sword and South Eastern Asia’s Saigon Jokers. Froggen quickly lead his team to victory in the games against Dig and SJ pulling a combined 6-0-14 score across both of the games but sadly could not bring his team victory against Najin despite an impressive performance on Karthus against SSONG’s Orianna. Following this impressive showing in the group stages Froggen and CLG.EU were then up against World Elite in possibly the most infamous pro league series of all time. This series saw Froggen pitted against one of the other elite mid laners of the world, Misaya. Game one of this series saw world elite banning out Froggen’s Anivia and forcing him onto Karthus the Karthus pick from Froggen in this game seemed underwhelming and CLG.EU quickly dropped the game to WE. In game 2 Froggen once again was forced onto his Karthus but this time he had something to prove and with an impressive 8-2-6 score against Misaya’s Vlad managed to grab his team victory in the 55 minute long game. With the series tied up 1-1 the next game was possibly the most important game of Froggen’s career with him needing to win this to get into the semifinals of the tournament. Once again this game saw Froggen on Karthus and Misaya on Vlad and like the previous game saw Froggen with a dominating performance to bring his team the close 2-1 victory over World Elite. The semifinals of world had CLG.EU in a rematch against their OGN summer finals opponent Azubu Frost. Froggen started the series off hot with an outstanding game on Morgana against Rapidstar’s Karthus pulling a perfect 5-0-7 score and bringing his team a swift victory. Game 3 saw Froggen on Orianna against Rapidstar’s Ahri where Froggen failed to impress and went 0-3-0 to have the series tied up 1-1 against Frost. Game 3 of the series went similar to game 2 and saw Froggen highly underperforming on Morgana and sadly dropping the series 2-1 to Frost. Although finishing top four at worlds Froggen was still hungry for more and went into the season three LCS with huge achievement on his mind and with his heart set on victory.

Coming into this new LCS format with newly sponsored team Evil Geniuses Froggen had one goal and one goal only, to win worlds. Froggen entered the spring split of the EU LCS with a lot of hype surrounding him after he brought CLG.EU to three top 3 finishes at MLG Dallas, Lone star clash 2 and Dreamhack Winter in the months leading up to the start of the LCS. Week one of the LCS saw EG up against Gambit,Copenhagen Wolves and SK gaming. The first game of the week against Gambit Gaming had Froggen on his classic champion Anivia and with this pick he managed to carry EG to victory and secure them their first win in the 2013 spring split. Their second game of the weak was against the Copenhagen Wolves who decided to respect Froggen’s previous game and ban away his Anivia forcing him onto Twisted Fate. This Twisted Fate pick showed Froggen’s newly found diversity in playing roaming mid laners to add more pressure onto the map as he quickly secured EG a solid 2-0 lead coming into the spring split. The third game of the week had EG against SK Gaming and Froggen against SK’s Ocelote Froggen tried showing off how he had adapted into the new assassin centric meta by picking Akali but despite his best efforts EG lost and dropped their first game of the split to SK. This third game of the week was sadly only the calm before the storm of the spring split for Froggen and EG as this change to the meta moving mid lane from farm heavy mages to hyper carry assassins was very advantages for a lot of mid lane players but not for Froggen. Finishing the spring split with an unconvincing 15-13 record EG looked shaky going into the play-offs as they faced the Copenhagen Wolves lead by another young Danish mid laner Bjergsen. The mid lane match up for game one was Froggen on Anivia against Bjergsen on Ahri, with the way the meta had been going this match up seemed to heavily favour Bjergsen on his assassin against Froggen on his immobile mage. Despite this being against his favour Froggen still managed to pull a stellar performance and lead his team to victory with a 6-0-7 score and a 150 cs lead over Bjergsen. Coming into game two of the series Copenhagen Wolves realised Froggen was still a monster on his main champion and decided to ban it against him forcing him onto Kayle against Bjergsen’s Kassadin. Despite Froggen’s best efforts Bjergsen’s Kassadin play was too much for him to handle and EG lost the game with the series being tied up 1-1. game three saw EG doing a little respect banning of their own by banning Kassadin away from CW’s Bjergsen. This game had Froggen showing that he wasn’t going to be pigeon hold as a farm heavy mage player and decided to pull out Zed. Up against Bjergsen’s Orianna this really was make or break time for Froggen. With a flawless 2-0-5 score Froggen brought his team victory in a quick 33 minute game and showed the world that he could play assassins.

After this win EG moved into the semifinals where they would face the number one seed into the play-offs Fnatic. The first game of this series saw Froggen with yet another assassin pick playing Ahri against xPeke’s Nidalee. Despite Froggen having an impressive laning phase and good teamfighting on Ahri the rest of EG could not keep up and they lost the first game in a quick 34 minutes. The second game of the series had Froggen defaulting back onto his Anivia. Peke responded to this Anivia pick with an interesting mid lane Caitylyn pick. Froggen once again proved how he is the Anivia god and with an impressive 6-0-7 score he lead EG to a decisive victory and tying up the score 1-1 to take the series to a third game. Despite Anivia not being banned Froggen decided to try his hand at playing an assassin again so this game saw Froggen playing Ahri up against Peke’s Twisted Fate. Once again despite Froggen having an impressive showing on Ahri his team could sadly not follow suit and EG dropped the game to Fnatic sending them into the third place match against SK Gaming. This series against SK looked like Froggen looking for redemption and looking to show the doubters that he could carry on assassins. Picking Kassadin in game one Froggen showed that he still had what it takes and pulled an amazing 12-2-6 score absolutely annihilating Ocelote’s TF and bringing EG to a 1-0 lead. In the second game of the series Froggen decided to fall back onto one of his classic farm heavy mages, Lux. Froggen used the lady of luminosity to lead EG to a convincing 2-0 victory over SK and secured them third place in the spring split. Despite finishing in the top three teams of Europe Froggen was still not satisfied and was hungry for more.

With this hunger Froggen set his sights on winning the spring split and going to worlds. The summer split saw the introduction of several new teams into the EU LCS and a lot more difficult competition for Froggen and EG. The first week of the summer split was the introduction of “super weeks” which meant EG had to play 5 games over the course of a weekend. These games were against Alternate, Gambit, Fnatic, Lemondogs and SK Gaming. These 5 teams pitted Froggen against arguably five of the strongest mid laners in Europe and although Froggen managed to bring his team to victory against old favourites Gambit and Fnatic sadly EG were defeated against SK and the LCS newcomers ATN and LD. The summer split for EG was not a good one and resulted in them having a disappointing finals score of 15-13 but despite this disappointment during the regular season Froggen was ready for play-offs and was hungry to qualify for season 3 worlds. The first series of the summer play-offs had EG against ATN which Froggen and EG quickly and convincingly won to move on to the semifinals in a rematch of the previous splits semifinals against Fnatic. Both games of these series not only looked disappointing for Froggen but also looked disappointing for EG as a whole. EG quickly got demolished in an embarrassing 0-2 loss to Fnatic which put them into the third place match and Froggen’s last hope for qualifying for worlds. This last chance match would pit two legends against each other. Gambit Gaming and Evil Geniuses had both attended and had amazing performances at the previous years worlds and now one of the teams was on the brink of not even attending the next one. Both of these teams came into this game with emotions high and with their sights set on the world championship. The first game of this series saw Froggen playing Orianna against Alex Ich’s Karthus. Being a classic farm heavy mage match up it was clear that Froggen would hold the advantage coming into this game and he quickly made this known. Bringing his team victory with an astounding 7-0-12 score Froggen proved why he is the king of mid lane mages and brought his team one step closer to the world championship. Game two saw Froggen playing Zyra against Alex Ich’s Karthus, this whole game looked terrible from EG as Gambit quickly took the victory and tied the game up 1-1. After this second game it looked like Froggen was cracking under the pressure and it seemed like worlds were already out of his grasp. Sadly this was true and despite wanting it more than anything Froggen could not bring EG victory and ended up losing the series 1-2 to Gambit.

This defeat in the play-offs and failure to make it to the 2013 world championship meant that Froggen had failed at achieving his goal. This failure lead to the disbanding of EG and Froggen looking to captain a new team in the 2014 LCS to try and win worlds.