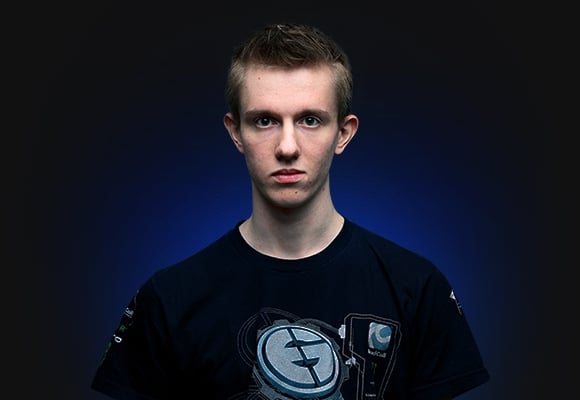 Throughout season one league of legends saw the rise of several mechanically skilled mid laners. But it was not until season two that the role of a mid laner would become transformed from a job to an art form. This would be from the introduction of a new breed of talent into the professional LOL scene, the fore-runner of this group being a young Danish lad by the name of Henrik Hansen also known as Froggen. This boy would single handedly change the way players looked at mid lane and how it should be played, this article will detail his birth into the league of legends scene and his rise to dominance over the past 3 years.

To understand the impact of Froggen’s entry into the league of legends scene it is important to describe the context of what he was entering. The time was January 2012 coming off the back of IEM Kiev this powerhouse of a team called Moscow 5 was steam rolling their way through the competitive league of legends scene lead by what was being called the best mid laner in the world Alex Ich. Froggen was entering his first major tournament with the newly acquired CLG.EU and was looking to make a name for himself. In his debut tournament Froggen lead his team to an outstanding 3-0 score through the group stage and into the semifinals where he faced Absolute Legends, game one saw Absolute Legends banning out Froggen’s core champion Anivia and him picking Cassiopeia Froggen and CLG.EU quickly made work of game one and looked to win the series with great ease. Coming into game two Absolute Legends felt like Froggen’s Anivia wasn’t something they actually needed to be worried about and decided not to ban it against him this over confidence would quickly lead to their downfall as CLG.EU close out the series with a convincing 2-0 victory. This win over AL propelled CLG.EU into the final against Moscow 5 the seemingly unbeatable team. Coming into game one of the series the Russian powerhouse showed extreme hubris allowing Froggen onto his patented Anivia pick and quickly feeling the backlash as he ended the game 6-0-9 against Alex Ich’s Galio. After what can only be called a stomp Moscow 5 quickly learned their lesson and banned Anivia the next game forcing Froggen onto one of his less comfortable champions, Ahri. Although he didn’t have the impact on Ahri as he did on Anivia Froggen still finished the game with an impressive 4-3-5 score despite losing. With the score being tied up 1-1 and CLG.EU needing this game to take the series the pressure was on Froggen to be the carry that CLG.EU needed, picking Cassiopeia in game 3 Froggen showed the everybody why he was the best mid laner in the world pulling an impressive 9-3-5 score Froggen against Alex Ich’s Karthus Froggen got his team the victory and cemented their place in the professional league of legends scene.

With this amazing start to 2012 Froggen only aimed to propel his career higher. With top three finishes in ten different European tournaments(placing first in six of them) in the first 8 months of 2012 Froggen was seen as the rising star of league of legends. Into the later parts of 2012 Froggen competed in some of the most important tournaments of his life. The first of these tournaments being The Champions Summer 2012. This tournament was the biggest tournament in Korea and the winner was seen by many as the best team in the world. Coming into this tournament Froggen was ready to show that the west had their stars too and that He was ready to prove himself against the likes of Ambition, Rapidstar and SSONG. Carrying his team through the group stage with an impressive 3-0 Froggen was ready to face the real challenge in the quarter finals against World Elite’s Misaya. World Elite showed severe over confidence coming into this set allowing Froggen to get Anivia in the first game which he proved wasn’t just good against western teams and quickly took the first game against them. Game two saw World Elite respect Froggen and ban his Anivia away from him putting him onto Ahri which much to their dismay was almost as strong as his Anivia and allowed him to lead CLG.EU to a solid 2-0 victory. With this set behind them CLG.EU prepared to face one of the Korean elites Najin Sword in the semifinals.

Lead by Maknoon, Najin Sword were one of the favourites to win this tournament and were expected to shut down the western hype train that Froggen was leading. The first game of this series saw Najin Sword not being over confident and banning Anivia against Froggen forcing him onto Karthus. This did not work however as Froggen just applied his same strategy and making himself the late game hyper carry that CLG.EU needed to reach their victory. Game two saw Najin again banning Anivia against Froggen so he decided to fall back onto Ahri. Again Froggen showed the Korean giant what He was made of as He hard carried his team to a solid 2-0 lead. During the third game of this series Najin decided that their only hope was to use all three of their bans on Froggen, banning Anivia. Karthas and Gragas Froggen ended up on Kennen. Froggen’s Kennen play was underwhelming and it seemed Najin had found a way to shut down the European prodigy. The picks and bans in game four saw Najin again using all three of their bans against Froggen in an attempt to shut down his carry potential. Sadly for Najin Froggen pulled out an some incredible Morgana play to close out the series in a convincing 3-1 victory.

This convincing victory against Najin allowed CLG.EU to advance into the final against Azubu Frost. This was the final test for Froggen as he was up against arguably the best mid laner in Korea Rapidstar. The first game of this match-up had Froggen playing Diana and carrying CLG.EU to a solid victory to secure themselves a 1-0 lead against Frost. Despite Frost banning away Froggen’s Anivia in game one and two he proved as he has many times before that he is not just a one trick pony and pulled out a Karthus in game two to get CLG.EU a 2-0 and get them one step closer to being champions. The third game of this series had Froggen picking Vladimir after Frost banned Anivia and Diana away from him, this Vladimir pick left a lot to be imagined from the Dane and allowed Frost to bring the series back to a 2-1 score and was the building block in what would be a crucial comeback. The forth game of the series had Rapidstar picking Vlad against Froggen in what seemed to be a gesture of showing him how a real mid laner does it and after a hard fought battle managed to defeat Froggen and CLG.EU taking the game to a fifth game that would be blind pick. With the Koreans having the upper hand being experienced in the art of blind pick matches in combination with Snoopeh and Wickd having rather under whelming performances Frost managed to bring a swift victory against CLG.EU giving them second place, which is still the highest a western team has placed in an eastern tournament to date. This OGN tournament showed the entire world what this plucky Dane could do and that he was a force to be reckoned with in the competitive league of legends scene.