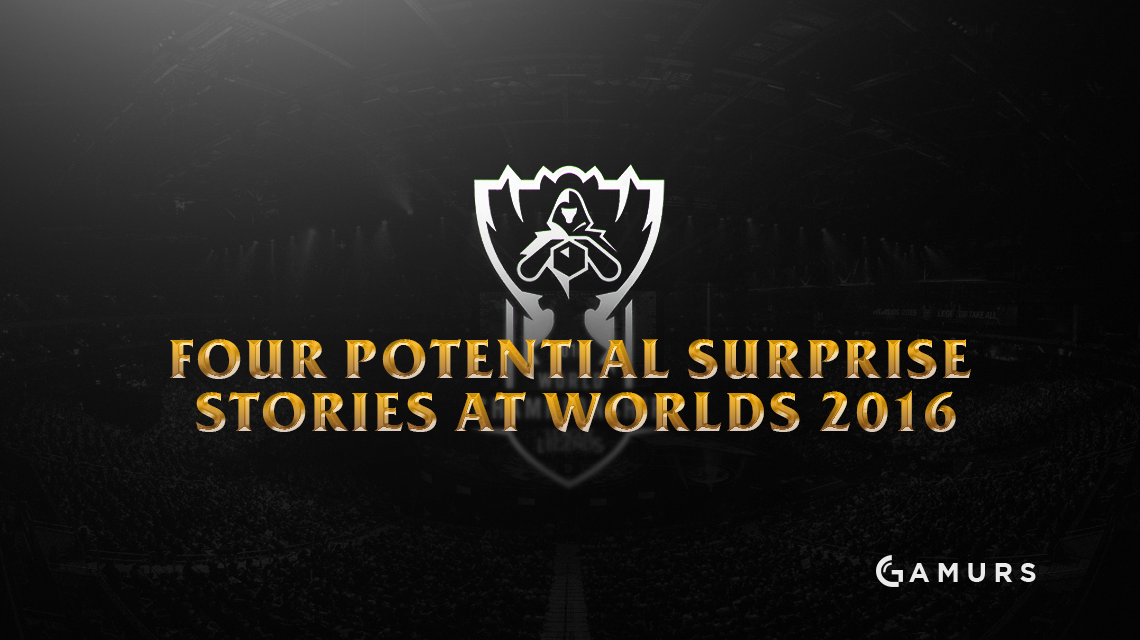 The No. 3 seed from North America is on a run of form that would scare most of the teams in this tournament. Admittedly, I may be a bit biased here. Throughout 2016, the two teams I payed attention to the most were Team SoloMid and Cloud9. So if you must, take this with a grain of salt, but Cloud9 is a genuine force right now, and the group that they have been put in opens the door to endless possibilities.

At worst, and this could easily happen, Cloud9 gets last in their group with the Flash Wolves of Taiwan, SK Telecom T1 of South Korea and I May of China. This entire group could go in any direction. Jung “Impact” Eon-yeong is on a rampage right now, with many people even saying he is currently performing better than he did when he won Worlds with SKT. No one else on this team is a slouch either, and the lighthearted atmosphere created by William “Meteos” Hartman, Nicolaj “Jensen” Jensen and Zachary “Sneaky” Scuderi likely makes it pretty difficult to tilt too hard, especially with the impact that coach Bok “Reapered” Han-gyu has had on the team.

Speaking of Reapered, let’s look at what this head coach has done for the team. In his career as a player, Reapered was a triple threat: shot-caller, carry, out-of-game strategist. As a coach, the out-of-game strategist role is now his job. When Reapered joined this team, he brought the players together. They had different styles, but he was the driving force behind keeping them all on the same page and doing whatever was best for the team. As the meta shifted, Reapered made sure his boys shifted with it and kept the right mindset. Since Reapered joined the team, Cloud9 has become a strategic team both in and out of the game. Before, the team completely relied on Hai “Hai” Du Lam as the shotcaller, whether in his natural mid lane or as a support. When Hai’s skills no longer fit with the team and he had to be replaced, the squad looked lost. Reapered made every member of Cloud9 a strategist. The players knew how to play their roles, but their macro play was not a pretty sight without their general. Now, they are all generals. Reapered has also improved Cloud9’s drafting tenfold. The team knows how to draft winning lanes, or at least neutral lanes, and Meteos is always on a big impact jungler ready to help whatever lane the squad knew they would struggle with. Cloud9 is a well oiled machine, due in large part to Reapered.

The North American underdogs almost pulled off a big upset last year, and they seem to be in a good spot to make it happen this time around on home soil. I’m not saying we’re looking at a team that could win the event, but winning the group isn’t entirely out of the question. From there, almost anything can happen.

One of the two International Wildcard representatives, INTZ e-Sports is here to play spoiler. The luck of the draw was a big factor in this one, as it seems like INTZ has the Group of Life. Well, the Group of Life with EDward Gaming on top.

Like Cloud9, INTZ could certainly get last place in its group. In fact, that is the most likely possibility. In this spot, it may have been smarter to focus on one of the other two teams, H2k-Gaming of Europe and ahq e-Sports Club of Taiwan, in the Group of Life that has a chance to make it out. Instead, I’m going with the total underdogs here, because this squad still has somewhat of a shot. It may not be super realistic, but H2k and ahq are not highly rated going into this tournament. The No. 2 spot in this group is up for grabs, and INTZ is looking to make history as the first International Wildcard representative to advance from the group stage.

Realistically, if the INTZ players play their best League of Legends and the players of ahq and H2k slip up, INTZ can sneak through this group with a 2-4 or 3-3 record, force a tiebreaker or two and maybe, just maybe, qualify for the quarterfinals. It may be a pipe dream, but let’s look at the opposition.

H2k, more than any other team at this tournament, can lose to themselves more than they lose to their opponent. Any decent team can take advantage of an opponent with internal issues if that comes to fruition, and every team at Worlds is decent enough to pull that off. Looking for a self-destruct button on INTZ, Konstantinos-Napoleon “FORG1VEN” Tzortziou stands out. Known for his toxic behavior, FORG1VEN can destroy a team all by himself. Whether he destroys the enemy teams or his team at Worlds, only time will tell.

For ahq, we look at Xue “Mountain” Zhao-Hong and his inconsistent play in the jungle. If INTZ has a “star” player, it’s Gabriel “Revolta” Henud. This man is going to have to keep Mountain out of the game if INTZ wants to steal a match off of ahq.

Obviously, this is a very “Reddit analyst” look at how INTZ can beat these two teams and I fully admit that. INTZ will need to catch ahq and H2k on off days and have strong performances if this team wants to win. But hey, it’s possible.

Okay okay, I know it sounds crazy, After all, these are the defending world champions. Lee “Faker” Sang-hyeok is on this team. The ROX Tigers even lost to these guys. It is SK Telecom T1. And yet…

I’m beating a dead horse here, but we have to talk about the jungle for a second. The jungle is the glaring problem on an otherwise very strong SKT roster, and it is still uncertain if SKT has fixed the issue. The squad has had quite a bit of time since getting reverse swept by KT Rolster to find a better way to run the jungle, but we will have no way of knowing whether or not they fixed the issue until we watch them play their first match. To put it simply, Kang “Blank” Sun-gu is a wildcard and a possible liability. In a group with superstar junglers like William “Meteos” Hartman, Hung “Karsa” Hau-Hsuan and Fan “Avoidless” Jun Wei, SKT could be punished for its weakness in this position.

Yes, there’s a “Faker Factor,” but no matter how good you are as a player, League of Legends is not a game in which any one player can carry a team anymore, especially at the highest level. If SKT performs and wins this group, it will not be entirely on Faker’s back. If that happens, he is truly a god among us and no one else should even try to beat him.

As for the ROX Tigers, the favored team going into Worlds, losing to SKT, don’t think of it as SKT always being better than ROX. If you’ve ever had an older brother, you’ll get what I’m about to say. He was always better than you, at everything. He was bigger, faster, stronger, smarter. Every time the two of you competed in anything, he won. Even if you improved and he got worse. Even if you could beat people that he lost to. He beat you. Even if you knew you were better than him, he beat you. It became a mental game, and that was where he had the edge. In the minds of the ROX players, SKT is the big brother. ROX is the better team, without a doubt. SKT can lose to numerous teams at this tournament. ROX can beat those teams, but they could lose to SKT. It says nothing about SKT’s skill.

SKT could easily win its group, or it could get second, or third, or maybe even fourth. The most likely scenario probably sees SKT win the group, or at least advance, without much of a struggle. Still, the lack of map control resulting from the lack of jungle pressure is a major red flag, and the other teams in this group are severely underrated. SKT may not be the gods that everyone thinks they are.

Before you attack me and assume I’m only doing this based on G2 Esports’ poor international performance at the Mid-Season Invitational, hear me out.

International pressure does play a part in why G2 could fail. Ignore MSI, for the most part. This is a pretty young team with practically no experience on the international stage. In the top lane, Ki “Expect” Dae-han has no international experience and has very little professional experience in general. In the jungle, Kim “Trick” Gang-yun’s only experience at an international tournament was at MSI, and we all know how that went. The same can be said for Luka “PerkZ” Perković in the mid lane. The only players on this team who have proven themselves on the international level are the bot lane duo of Jesper “Zven” Svenningsen and Alfonso “mithy” Rodriguez. The two played for Origen at 2015 Worlds (top-four), IEM San Jose (winner) and IEM Katowice (first round exit). Do I expect these players to choke on the big stage? No. Is there a relatively good chance it could happen? Yes.

Let’s be real… Europe as a whole has looked pretty shaky this year. This rookie team with obvious problems still managed to dominate the league in both splits, which is commendable, but not all that impressive. G2 is certainly miles ahead of the rest of the European competition, but that isn’t saying much. This team could definitely be overrated. If Counter Logic Gaming decides to actually show up and play at full potential, G2 is in for a rough ride. CLG has not looked good since the end of MSI, but every League of Legends fan should know how elite CLG can be. If G2 struggles, CLG will be merciless, assuming they have recovered from their lackluster Summer Split and adapted to the meta.

When it comes to playing around the top lane, G2 doesn’t seem to know how to do it. Expect is going to have his hands full, facing off against the likes of Song “Smeb” Kyung-ho of the ROX Tigers (currently the best player in the world) and Darshan “Darshan” Upadhyaya of CLG. G2 doesn’t stand a chance against ROX, so really the important match for Expect will be against Darshan and CLG. Darshan has suffered a drop in form lately, but the guy is one of the best top laners the NA LCS has ever seen and CLG knows how to play around him when they need to. If Expect gets put into a major deficit and Darshan gets fed, G2 is in a bad spot.

This is the best team that Europe has to offer. Theoretically, beating North America’s No. 2 seed shouldn’t be too hard. It is expected by almost everyone that G2 will take No. 2 in this group behind ROX and then likely fall out in the quarterfinals, but this squad could easily crash out of this tournament during the group stage.

Which teams do you think could surprise the world?

Who are you rooting for? Let us know you thoughts by commenting below or tweeting us @GAMURScom.