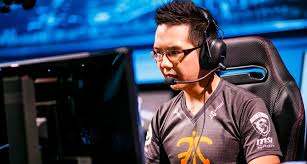 Performance of Fnatic at the beginning of split is recently the hottest topic related to EU LCS. Almost nobody expected that team affected with such enormous roster changes will be able to take up the fight against Spring Split favourites, during the most important European tournament. And yet it still happened.

The result of 4-0 after first four matches says everything. I was thinking about writing about this team last week, but I decided to wait for more material concerning Fnatic, and while watching their first week performance, I had a feeling to border on certainty, that it wasn’t a one-off. The most titled European organization decided to literally smite their roster, but it is perfectly clear that those were well-thought-out changes. Overall team performance is based on few factors, which majorly rely on fantastic interactions between players and balance.

Extraordinarily experienced support is the main character of whole mechanism. French, with Cambodian roots has been on  the professional scene since season  one,and took part in all four consecutive World Championships, thus he has outstanding game know-how. By adding his brilliant mechanics and tendency to take team decisions, we create a perfect leader – a man, who will pass his knowledge to fresh players, help them to understand the game even better and essentially, lead the team in battle on Summoner’s Rift.

Before start of the split, fans of Fnatic certainly  were not worried about Yell0wStaR, but four  other, new faces in the team. Despite their  unquestionable talent, signing up of young and  skillful – Febiven and Steelback, was practically  quite blind call. Dutch midlaner, who we could  watch before in H2k team, had sizeable  problems with pressure, and transfer to the  one of the biggest organizations surely did not  fix that problem. However, it has to be  admitted that ‘Febi’ has made a huge progress in this aspect, which we could already see during the final stage of Expansion Tournament. Unchained from his trouble, he finally showed the scale of his talent – during first two weeks of EU LCS, he managed to get score of 23 kills, while dying only four times, and on the other hand, we could watch his fantastic plays at least few times during each match.

The second European talent, Pierre “Steelback” Medjaldi, was significantly a bigger mystery. Admittedly, his performances in SK Gaming Prime were surely successful, but considering tremendous differences between LCS and Challenger Series, drafting young marksman into Fnatic was pretty risky. In practice, French earned trust quickly. He managed to end his first week with impressive score of 11/0/26, while not dying any single time. Despite he belongs to the team for a short period of time, his excellent positioning and synergy with Yell0wStaR deserves attention. It is worth to mention that Fnatic management showed off for another time by making decision to pick French ADC – thanks to that both bot lane players come from the country of Eiffel Tower, Molier and Napoleon, which surely improves their communication during laning phase.

Huni and ReignOver – Recruitment from Korea

I have to admit that I was very sceptical about these transfers. Not well-known even in their homeland toplaner and jungler, who played before in Incredible Miracle, team which desperately tries to keep their spot in every single OGN (now, in LCK things changed a bit, but it’s whole other story) split? No, that is not going to work – I thought. I was wrong. Signing up of two Koreans was not a desperate attempt to fill holes in the roster, but another well-thought-out decision.

First and foremost, it turned out that ReignOver perfectly speaks English, which in his case eliminates any communication problems. It is needless to say, that for jungler it is very important thing. It also partially solves poor English of Huni – this means that they can speak Korean, so it is enough for Huni to understand calls of the team. Now, let’s proceed to individual mechanics of both players. ReignOver already showed that he has a potential, so rumors about Samsung being interested in him after both of its teams disbanded don’t have to be false. It is also worth to point out, that it is to his merit that Olaf came back to the European LCS. Meanwhile, Huni doesn’t shine, which maybe does not describe him as the best player, but he is a solid craftsman. His playstyle fits perfectly to ReignOver’s, and his role in team does not require immense mechanics, thus new Fnatic toplaner so far presents positively.

Analyzing whole, efficient mechanism, it is necessary to mention that team is superbly prepared to consecutive matches. Players of Fnatic know perfectly what to do, they have prearranged plan for every skirmish and usually win the pick and ban phase. It certainly helps them during further action, while being in game. It seems that Yell0wStaR, mentioned earlier and recently employed Spanish coach Louis “Deilor” Sevilla are doing fantastic job.

As a threat to Fnatic’s win streak, I  would point stagnation. It is not  difficult to see that during first two  weeks, Fnatic showed their limited  champion pool (each player played  two champions: Huni – Rumble,  Lissandra, ReignOver – Rengar, Olaf,  Febiven – Xerath, Zed, Steelback –  Sivir, Corki, Yell0wStaR – Leona, Annie) and pretty obvious teamcomps. It seems that these four mentioned matches are enough to figure out how ‘unexpected candidate’ works. However, after analyzing the statements of Fnatic’s coach and looking at the solo queue games of Fnatic’s players, I think that the management clearly understands it. They will not allow the situation, in which enemies can predict their plans. Therefore, I think that fans should be excited about next matches, rather than afraid. But on the other hand, I think it is slightly too soon to call them the favourites of EU LCS Spring Split.