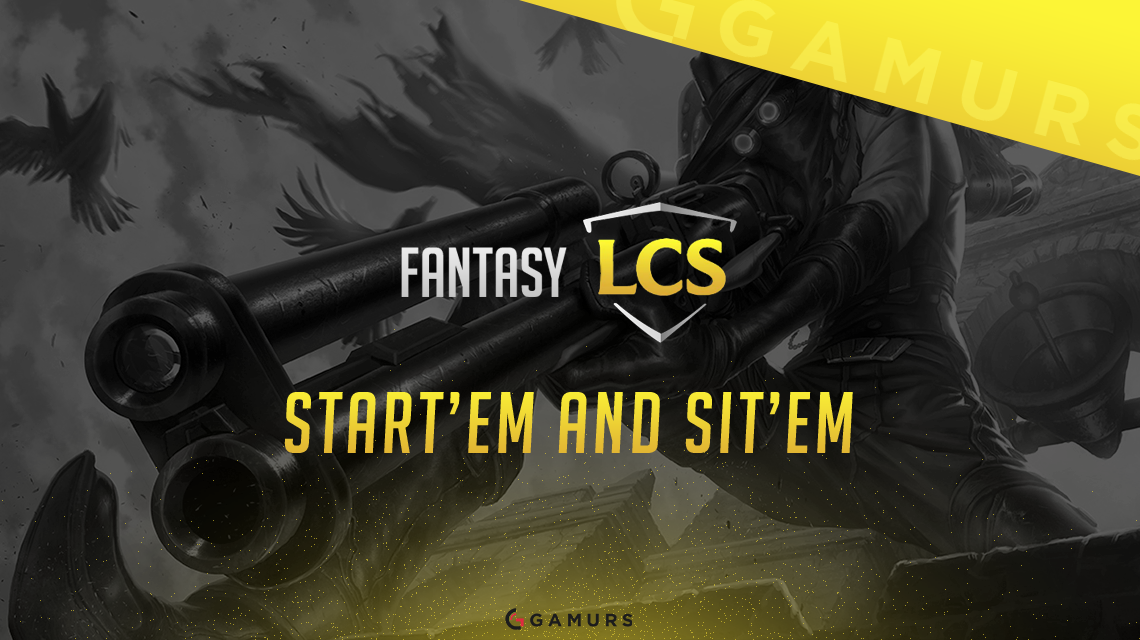 Sencux made my winners list for his succes in week six of the European League Championship Series, as himself and the rest of Splyce really started to find some solid traction. While the match against G2 may scare some people, including myself, away from him, I was able to talk myself into putting him on the Start ‘em list. Splyce is 7-1 in their last four matches, and I expect them to carry that energy into week seven. While I am not expecting huge numbers in the G2 match, I am not too scared to start him. The series against Giants is where you are going to find a majority of his points this weekend. In these teams’ first meeting in week three, he scored 61.79 points, and with Splyce getting better since then, I like the look of Sencux in my lineup this week.

I wanted to highlight Hauntzer this week because he and the rest of TSM have two matches that, if viewed from the naked eye, seem like two easy games. While TSM beat both of these teams in their first meeting with them, it was not without a little drama. Echo Fox was able to take one map off of TSM, and that effected the point output of Hauntzer, specifically if you are, like we are at GAMURS, using the first two games points scoring system. TSM should be better prepared for this EF match, so look for higher points from not just Hauntzer but the rest of TSM, while the TL match should be the same story with TSM players scoring in the 40s to 50s.

A very high DraftKings price is one major tell of how much confidence people have in a player, and if you are like me at amusement parks, you follow the crowd. In this case, the crowd is hopping on the shoulders of LOD, a player I have highlighted in my winners and losers article series a few times. While his scores against both of these squads the first time around (63.66 combined) is not near any records, it was a decent performance. Apex have slowed down the past few weeks, and NRG lost to Apex last week in week six. I think this is a good situation to put LOD in. I see him scoring near or above the 63.66 he had earlier in the split; the upside is pretty high, with a decently low downside, and he is a solid choice for the flex spot in week seven.

Expect was the top scoring player in week six, and was the number one player on my winners list for that week. He sort of flew under the radar for a lot of people with the success of the G2 bottom lane taking much of the fame, but Expect is not to be forgotten. While Splyce has, like I have previously mentioned, been making a ton of progress, G2 still has the upperhand in that matchup, and it is a similar story when you look at the H2k series.

Expect found 35.26 points in the first H2k match, while the Splyce game will mark the first time he plays against them this split. His teammates have had success when playing Splyce in the past, and I would not be surprised to see two scrappy and long games in that series, which will benefit Expect since he will have more time to gather points. He is a solid bet for both the traditional fantasy leagues and in daily fantasy contests such as DraftKings. Especially considering the fact there are plenty of players in the $7,000 plus range, you can get serious bang for your buck this week with Expect in DraftKings contests.

Just look at the two matchups Echo Fox has this weekend, and I do not think I need to say much more. EF have been struggling, recently dropping to the bottom of the standings after their loss to former tenth place team Phoenix1. Now they have to play the number one and number two teams in the league in the same weekend; yea, good luck with that. I can see the week seven losers list now, and at least one Echo Fox player will most likely be on it. I hope they prove me wrong, because how can you root against Rick Fox?

This sit ‘em recommendation is very similar to that of Froggen’s in that Jankos has to play the two top teams in his region in G2 and Fnatic, which does not spell a good fantasy performance. While H2k beat Fnatic earlier in the split, it was not a huge game from Jankos, who scored just 36.39 points in that outing. Fnatic have improved, and so has G2, with both teams making roster changes since then, including Fnatic dropping Yeong-Jin “Gamsu” Noh in favor of a shared top lane between their substitute, Jorge “WerlyB” Casanovas, and former G2 player, Mateusz “Kikis” Szkudlarek. The first meeting between H2k and G2 was split in a 1-1 tie, but similar to the Fnatic meeting, did not result in a ton of points from Jankos. To make a long story short, Fnatic and G2 have improved since their first meeting, while H2k has not advanced in a similar fashion.

If there is any reason you are starting Lourlo this week, it is because of the Phoenix1 match. I thought that match in itself would be good enough for Lourlo to avoid this list, but when I looked at the numbers, Samson did not perform too outstanding in the first meeting between these two squads, scoring 38.27 points. The TSM match, on the other hand, did not go so well with Samson scoring 12.80 points. I am expecting similar numbers in the TSM match, but the P1 match might see more points scored than the first time around, I do not think enough to salvage a really good week though. If you a desperate, throw him in on a gamble, but if you have other options, look at those first.

Like I talked about with Sencux, Splyce is rolling in their past couple of matches, so that is Smittyj’s first reason for making the sit ‘em list. The matchup against UOL gives you a little bit more faith, but he only scored 35.12 points in their first meeting, which is ok, but you would want just a little more. His 25.10 points against Splyce in week three was another ok performance. You can expect both of these numbers to stay relatively close to where they were in the first meetings, with perhaps Smittyj scoring a little fewer points in the Splyce game. Similar to Lourlo, if you are desperate, he is an okay pick at best, but exhaust other options first.