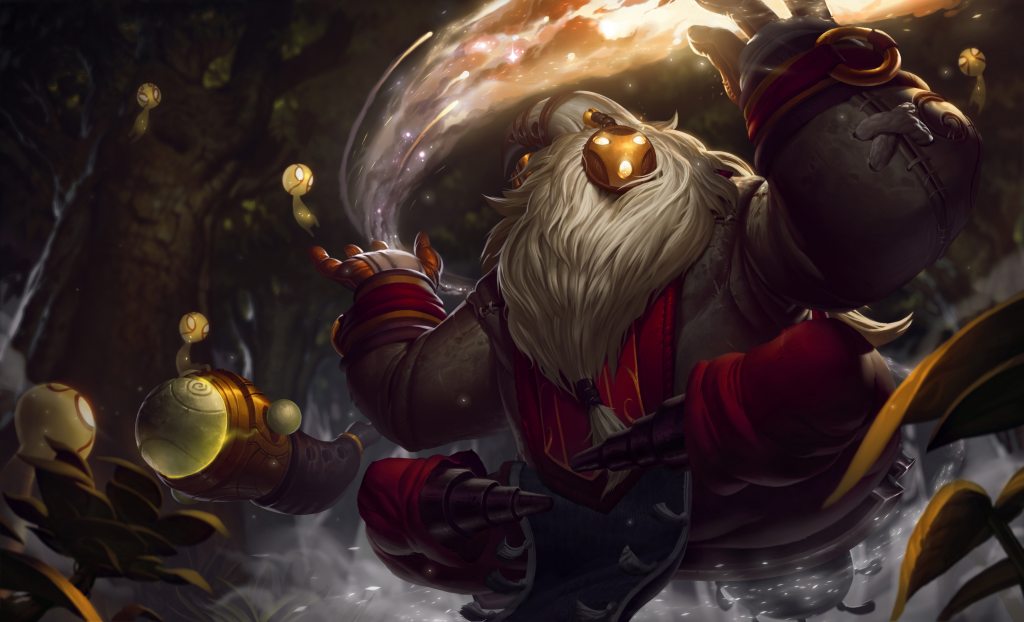 It’s been a while⁠—three years, to be exact⁠—since the wandering caretaker has received a new skin. And although Bard hasn’t seen much love from Riot Games, fans certainly haven’t forgotten him.

In a recent fan-made skin, Bard takes on a more aggressive persona, to say the least. In contrast to Bard’s role as an agent of serendipity in Runeterra, artist and Twitter user 아이룬히퍼(Hipper) has turned Bard into a combat-ready Viking rightly named Bardbarian. The concept art features Bard decked out in Norse-esque attire complete with a horned helm and a thick bushy orange beard.

Bard’s traditional spectral horn weapon has been replaced with a sleek Viking war horn—or could it be a drinking horn? The meeps have been transformed into tiny versions of Bardbarian featuring the same bushy orange beard as Bard. Traditionally, meeps seem rather calm and blank, but these Viking meeps look like they’re about to mess up someone’s day.

The artist shared several concept art sketches as well, which feature Bardbarian in a mix of color pallets with a variety of beard and weapon designs. They even went as far as to include concepts for each of Bard’s abilities.

His passive normally spawns chimes across the map, but this concept would spawn either a short sword or what appears to be a traveler’s map. His Q would shoot out a braided missile from a circle that looks like it was inspired by Nordic patterns. Bard’s healing shrine at max stacks would either be a jug of ale or tasty mutton chops. Bard’s E is probably the most interesting out of all his spells. The artist would have Bard travel through a serpent ring portal while in a tiny Viking boat. As for his ultimate, a circle with two crossed axes would appear right before freezing everything caught in its path.

The artist is active online and has created several other concepts, like Deep Sea Yuumi, which takes the cute kitty and turns them into a sea demon. They also often poll their community for fan-made skins they’d like to see. Their most recent poll had the community choose which concept art the artist would move forward with for Bardbarian. Followers also helped name this skin.

While Bardbarian may not be coming to the game, it reminds us that this oddball champion is in need of a new skin—and many fans hope to see one in the near future.